Launch of the “Symphony of Engines”: press conference for the Concorso d’Eleganza Villa d’Este 2019.

Information about the programme and the field of participants of this year’s beauty contest for historic vehicles at La Scala Milan – Parade of the classics on the shores of Lake Como from 24th to 26th May is defined by two anniversaries: 90 years of the Concorso d’Eleganza Villa d’Este and 90 years of BMW automobile production. – New winner’s trophy “Trofeo BMW Group” celebrates world premiere.

Munich/Milan. A feast for the eyes and ears will enchant fans of Historic Cars and Motorcycles at the Concorso d’Eleganza Villa d’Este from 24th to 26th May 2019. This prestigious event is being held on the banks of Lake Como in Cernobbio, Northern Italy. The traditional press conference was held by the organisers on Wednesday 15th May to set the scene for the exclusive parade of beauties on two and four wheels. At Milan’s La Scala, BMW Group Classic, the Grand Hotel Villa d’Este and BMW Group Italia provided international media representatives with information about the programme schedule, the entire field of participants, and details and innovations that will once again make the world’s most exclusive beauty contest for classic vehicles with a heritage tradition an unforgettable event on the shoreline of Lake Como in 2019.

At the press conference held in Milan’s La Scala, Ulrich Knieps, President of the Concorso d’Eleganza Villa d’Este and Head of BMW Group Classic, joined with Danilo Zucchetti, Managing Director of Villa d’Este Hotels, and Sergio Solero, President of BMW Group Italia, to outline further details of the programme schedule. For the first time, they also presented all the vehicles nominated for the beauty contest in advance of the event. The list of nominated vehicles is available with immediate effect on the website of the Concorso D´Eleganza Villa D´Este.

This year, the festival of elegance organised jointly by BMW Group Classic and the Grand Hotel Villa d’Este is being held under the motto “The Symphony of Engines – 90 Years of the Concorso d’Eleganza Villa d’Este and BMW Automobiles”. In 1929, the beauty contest for automobiles celebrated its premiere in the grounds of the Grand Hotel Villa d’Este. At that time, the event had been created as a competition for particularly exclusive new vehicles. 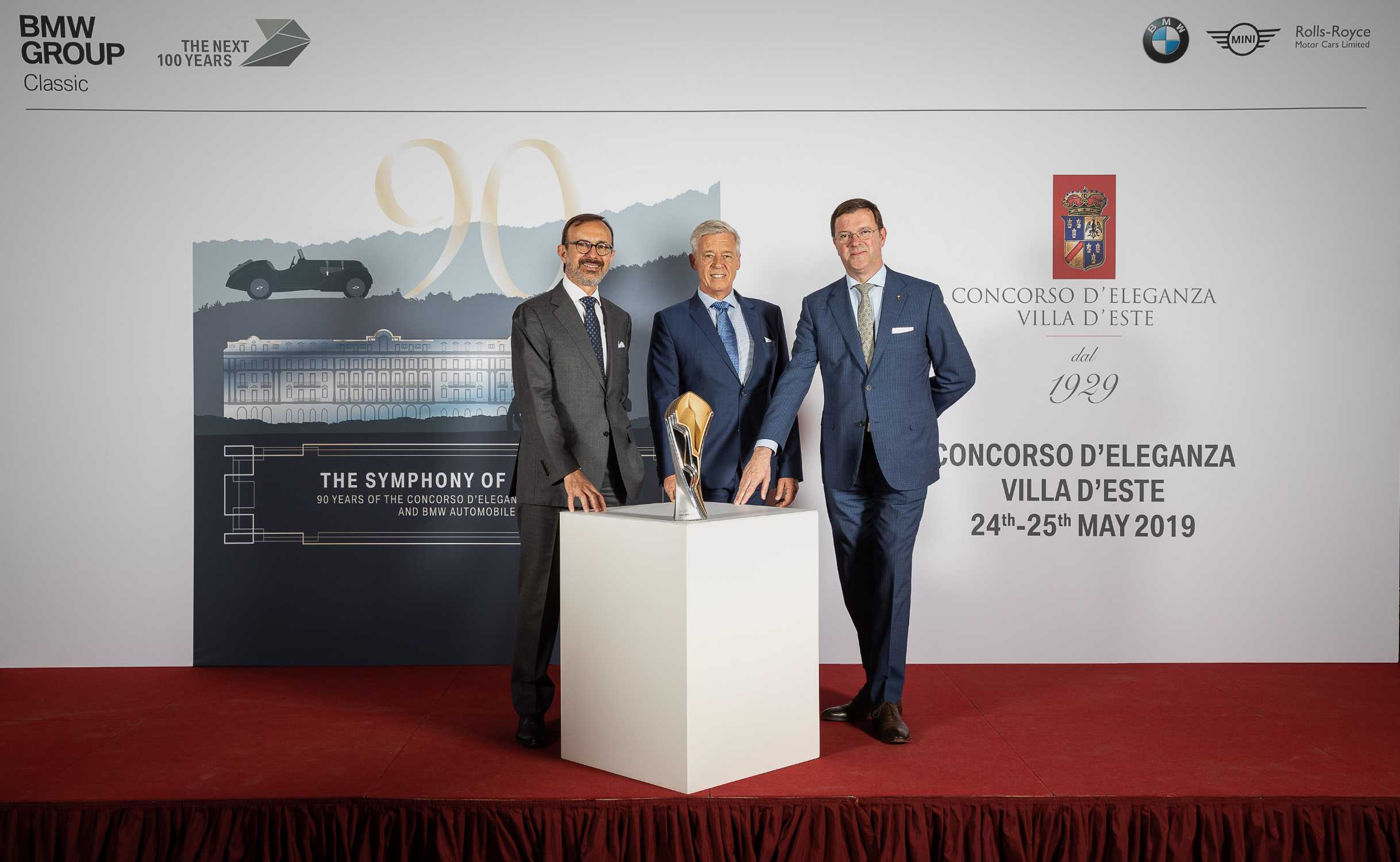 However, this was not the only premiere in that year. Meanwhile, the company BMW had already achieved initial successes as a manufacturer of aero-engines and motorcycles, and 90 years ago it started producing its first series automobile, the BMW 3/15 3/15 PS DA2. This anniversary provides the inspiration for this year’s BMW Group Classic exhibition at the “Padiglione Centrale” in the parkland of Villa Erba. A town setting from the 1920s forms the backdrop for presenting the historic automobiles and motorcycles that made the BMW Group mobile at that time. Yet another reason to celebrate is that the current event will mark an additional anniversary. For the past 20 years, the BMW Group has been committed to holding this beauty pageant for friends of classic vehicles. Initially, the BMW Group was the main sponsor but since 2005 it has staged the Concorso as joint organiser together with the Grand Hotel Villa d’Este. The contest has meanwhile become an absolute highlight for classic fans across the world.

Once again in the anniversary year 2019, the contest for Historic Cars will comprise eight award classes. And a field of some 50 nominated vehicles will again reflect the entire fascinating bandwidth of automobile history. The Concorso di Motociclette is being held for the ninth time and has now become a fixed element of the event. The Concorso d’Eleganza Villa d’Este 2019 will culminate with the award of the “Best of Show” among the Historic Cars on the Sunday.

This year, for the first time, participants in the contest will gather to celebrate the launch of the weekend for classic vehicles to go on an outing together. On Thursday 23rd May 2019, the Villa d’Este Prelude Tour will take the automobiles that have been nominated for the Concorso d’Eleganza Villa d’Este on a trip through the picturesque landscape surrounding Cernobbio and the region around Lake Como. The Villa d’Este Prelude Tour will be presented by the new partner Pirelli. This year, the famous tyre manufacturer will also be represented as an exhibitor at the Villa Erba for the first time.

The Trofeo BMW Group is traditionally conferred in the final podium ceremony for the winner of “Best of Show” and it celebrated another premiere at the press conference.

In 1929, the winners of the eight award classes for Historic Cars and the winners of several special awards will be presented with trophies that have been completely redesigned. They are being produced in a supremely sophisticated, additive manufacturing process in a first-time experience. Know-how from different departments in the BMW Group has been bundled for the development and production of the new trophies. The design process was in the hands of specialists at Designworks, a subsidiary company of the BMW Group. The manufacture of the trophies was also carried out within the company at the Additive Manufacturing Centre of the BMW Group.

The “Lange 1 Time Zone Como Edition” crafted by the Official Watch Partner, A. Lange & Söhne, was also presented in Milan. The watch created exclusively for the winner of the “Best of Show” is a masterpiece made up of 417 individual parts and it was handcrafted over a period of nine months.

During the course of his speech in Milan, Ulrich Knieps thanked the partners referred to above, and also extended his thanks to champagne producer Vranken Pommery for their ten years of partnership. He also announced a new partnership with Italian fashion label Larusmiani. The family-run company from Milan will provide outfits for the models during the parade alongside additional support.