Environmental balance study for the new BMW 745Le receives declaration of validity from TÜV Rheinland – the lower global warming potential for the entire lifecycle is up to 58 percent lower compared to the conventionally powered model.

Munich. The plug-in hybrid models of the new BMW 7 Series combine luxurious driving pleasure with forward-looking sustainability. This means that their progressive character are not only evident from recent innovations in control, networking and drive assistance systems, but also from their life cycle assessment. Just how great the advances in efficiency are that are enabled by BMW’s eDrive technology for luxury sedans is evidenced by the environmental balance study, which is now certified in accordance with the ISO 14040 and 14044 standards for the new BMW 745Le (fuel consumption combined 2.3 – 2.2 l/100 km; electricity consumption combined 15.7 – 15.6 kWh/100 km; CO2 emissions combined 53 – 50 g/km*). According to the analysis confirmed by the independent inspectors from TÜV Rheinland, the so-called global warming potential** of the plug-in hybrid sedan is 33 percent below the corresponding value for a conventionally driven model of the BMW 7 Series with a comparable output. When exclusive use is made of electricity generated from renewable sources, the climate-relevant environmental impact throughout the vehicle’s entire life cycle is even 58 percent lower. 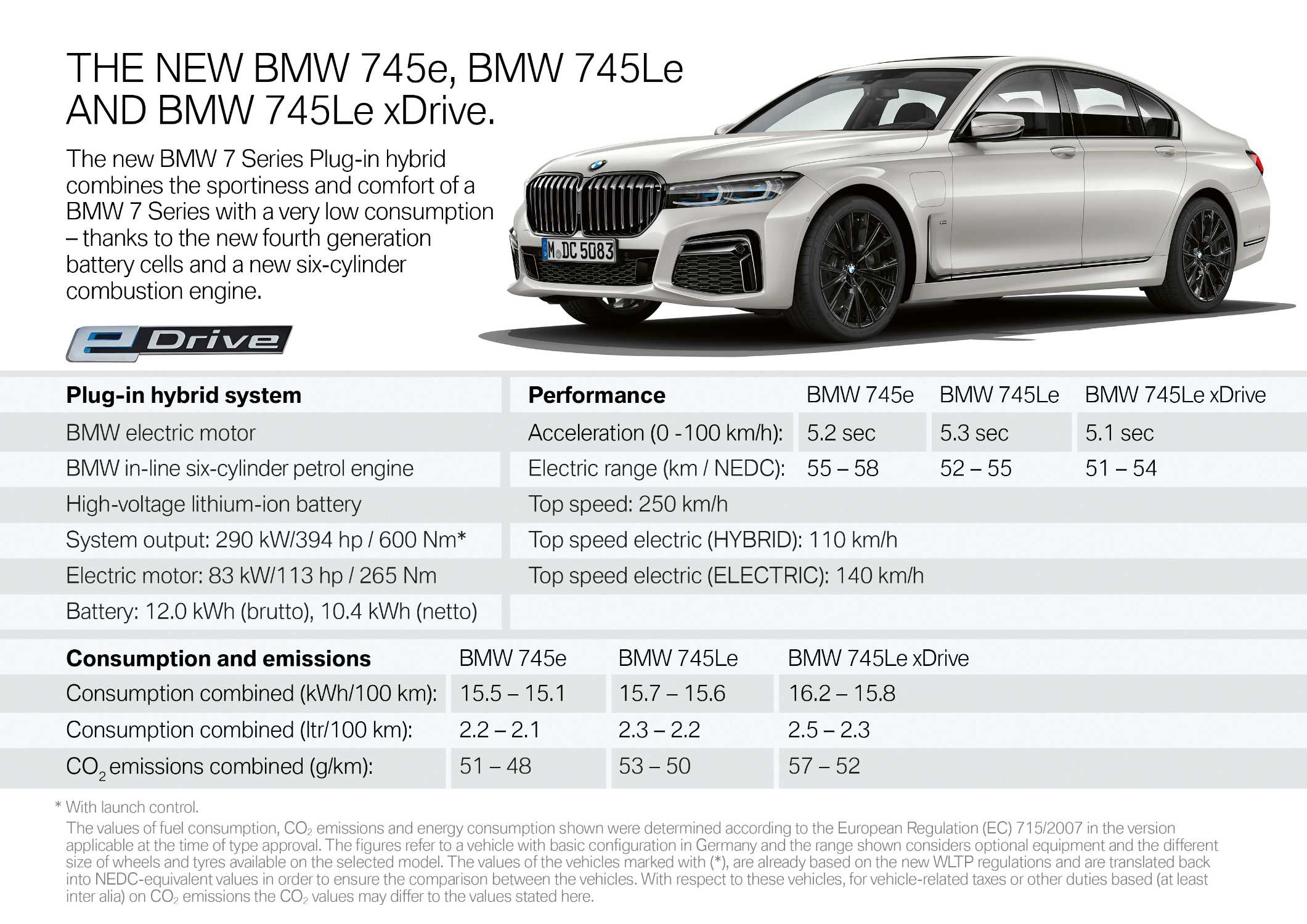 Local emission-free mobility in the city – and beyond.

This means that exclusively electric mobility in a luxury sedan can now be enjoyed far beyond the city limits. In the standard HYBRID driving mode, the new BMW 745e, the new BMW 745Le and the new BMW 745Le xDrive achieve speeds of up to 110 km/h with the power of the electric engine alone. Only at higher speeds or with particularly intensive load demands does the combustion engine come into operation. By pressing the eDrive button on the centre console, the driver can activate the ELECTRIC mode, which raises the maximum attainable speed to 140 km/h, locally free of emissions. In SPORT mode, the electric motor is used to support the combustion engine. Together, the combustion engine and electric motor produce a system output of 290 kW/394 hp. The combined power and maximum system torque of 600 Nm are available for more spirited acceleration manoeuvres. The new BMW 745e is able to accelerate from 0 to 100 km/h in 5.2 seconds, while the new BMW 745Le achieves the same in 5.3 seconds The new BMW 745Le xDrive attains a speed of 100 km/h from stationary in 5.1 seconds. The BATTERY CONTROL setting serves to raise the charge state of the high-voltage battery to a level determined by the driver or to maintain this level. On longer journeys, the stored electric power can thus be deliberately reserved for use in locally emission-free driving in urban road sections. The plan is to offer automated electric driving on the basis of e-zones defined by BMW by the spring of 2020.

Besides the intelligent driver system controller, the new high voltage storage system with the latest battery cell technology also plays a role in increasing the proportion of driving done on a purely electric basis, reducing consumption and CO2 values and attaining a favourable life cycle assessment in the new BMW 745Le compared with conventionally driven models. In the environmental balance study, the BMW 740Li (fuel consumption combined 7.4 – 7.2 l/100 km; CO2 emissions combined 170 – 164 g/km*) with a 250 kW/340 hp in-line six-cylinder engine was used to enable direct comparison with the plug-in hybrid model. The values determined for both models and subsequently set in comparison with each other refer to a use phase comprising a driving distance of 250 000 kilometres. Besides pure fuel and electricity consumption, climate-relevant emissions associated with the production and provision of the respective energy source were also taken into account. The plug-in hybrid model already achieves a reduction in global warming potential of 33 percent compared with the BMW 740Li when using energy from the EU-25 electricity mix, which considers all electrical energy generated in the European Union. When the electricity fed into the lithium-ion high-voltage battery of the BMW 745Le originates solely from renewable sources such as wind and solar power systems, climate-relevant emissions fall by as much as 58 percent in comparison with the conventionally driven model.

The certification procedures conducted by TÜV Rheinland subjected both the methods and the findings of the environmental balance study to detailed inspection. Experts not only analysed the input data and environmental information, but they also considered the process of the study’s compilation. Their certificate confirms that the life cycle assessment of the new BMW 745Le was issued in compliance with the requirements of the ISO 14040 and 14044 standards and that the methods applied correspond with the scientific state of the art.

Due to is long electric range, the new BMW 745e, the new BMW 745Le and the new BMW 745Le xDrive meet the criteria which have been stipulated for the classification as an electric vehicle and the associated preferential treatment in public road traffic. In addition they also qualify for reduced company car taxation in Germany. Only half the gross list price is used as a basis when calculating the monetary benefit from private use of the company car. The specific series equipment of the three plug-in hybrid models of the BMW 7 Series also includes an acoustic pedestrian protection system. When driving solely on electricity at speeds of up to 30 km/h, a distinctive sound created especially for electric BMW models is emitted from a loudspeaker system. The sound design radiates a vibrant acoustic presence, though without impairing the acoustic comfort of vehicle occupants.

The series equipment of the plug-in hybrid models also includes an auxiliary air-conditioning system. This can also be controlled remotely by smartphone using the BMW Connected App. New eDrive services help make it more attractive and convenient to charge the high-voltage battery when out and about. Digital services support the driver in his search and selection of public charging stations; they also enable control of the charging procedure via remote functions and transfer data relating to charge status, electric and combined range, and individual energy consumption to the driver’s smartphone or other personal terminal device. The standard BMW Live Cockpit Professional not only comprises a fully digital composite display and interconnected navigation system but also includes the BMW Intelligent Personal Assistant, which, similarly, supports the search for parking and charging facilities as well the reservation of charging stations.