Driving fun powered by nature: In the MINI Cooper SE Countryman ALL4 to “France’s Grand Canyon”.

Leisure sport and sustainable energy generation morph into one along the Verdon River bordering the south-eastern edge of Provence. This is an ideal destination for a white-water rafting outing with the MINI Cooper SE Countryman ALL4. It can transport kayaks to remote boating points along the river while at the same time embracing the opportunity to use electricity from renewable sources to power driving fun.

Munich. This gorge is one of the most spectacular natural landscapes between Brittany and the Côte d’Azur. Water-sports enthusiasts, hikers, and climbers call it “France’s Grand Canyon”: the Verdon Gorge located in the south east of the Département Alpes-de-Haute-Provence. Over a period of millions of years, the Verdon River has cut its way through the region’s limestone. The gorge is more than 20 kilometres long, with winding country roads wending their way through little villages and past popular panoramic viewing points. In summer, hosts of tourists with canoes and kayaks are on the lookout for somewhere to launch their boats and paddle along the turquoise-blue waters of the Verdon. The MINI Cooper SE Countryman ALL4 roves to be an ideal vehicle for negotiating the dirt and gravel tracks leading to the banks of the river. After all, it has a hybrid-specific all-wheel drive that additionally creates a particularly sustainable form of driving fun.

The plug-in hybrid system of the robust all-rounder comprises a three-cylinder petrol engine equipped with MINI TwinPower turbo technology. This transmits its power to the front wheels while an electric motor is driving the rear wheels. Together, they generate a system output of 162 kW/220 hp. Furthermore, the intelligently controlled interaction between petrol engine and electric motor ensure demand-based power distribution to suit any driving situation. The high-voltage battery is located in a low-slung position beneath the rear seat bench of the MINI Cooper SE Countryman ALL4. This also provides a baggage compartment in the plug-in hybrid version of the versatile five-door car with a volume of between 405 and 1275 litres – ample space for holiday baggage and sports equipment. Two white-water kayaks can easily be transported to the Verdon Gorge on the roof of the biggest model of the British premium brand with the assistance of the optional roof rails and the rack system available in the MINI original accessories range.

Rafting fans will find perfect conditions for ambitious white-water paddling in the swirling waters of the river between Castellane and the artificial lake of Sainte-Croix. The level of difficulty depends significantly on the flow rate of the river, which is regulated by the upstream barrages. During the holiday season, the flow is increased twice a week. On these days, seasoned kayakers can ride the foaming rapids of the Verdon surging through the gorge towering up to 700 metres above.

A total of five barrages were erected between the 1920s and the 1970s in order to harness the waters of the Verdon River, supply the surrounding regions with water and generate energy with the assistance of hydropower stations. The latest and simultaneously biggest of the reservoirs created in this way is the Lac de Sainte-Croix, which has developed into a popular getaway destination. The high fluorine content colours the waters turquoise blue and in summertime they warm up to reach pleasurable bathing temperatures. Water-sports fans who prefer a more leisurely approach are able to take a trip upstream from the lake into the Verdon Gorge and admire the steep, rocky walls soaring above from the vantage point of canoes and pedalos.

Around 140 million kilowatt hours of electricity are generated each year by the hydropower station of the Lac de Sainte-Croix, which is located behind a concrete dam 95 metres high. The sustainably produced energy is fed into the distribution grid of the surrounding region. This means that the MINI Cooper SE Countryman ALL4 is able to recharge its lithium-ion battery with electricity generated from renewable sources during its evening stopover in Sainte Croix du Verdon. The high-voltage battery with gross energy capacity of 10.0 kWh can be plugged into a standard domestic power socket and fully charged in less than three and a quarter hours. 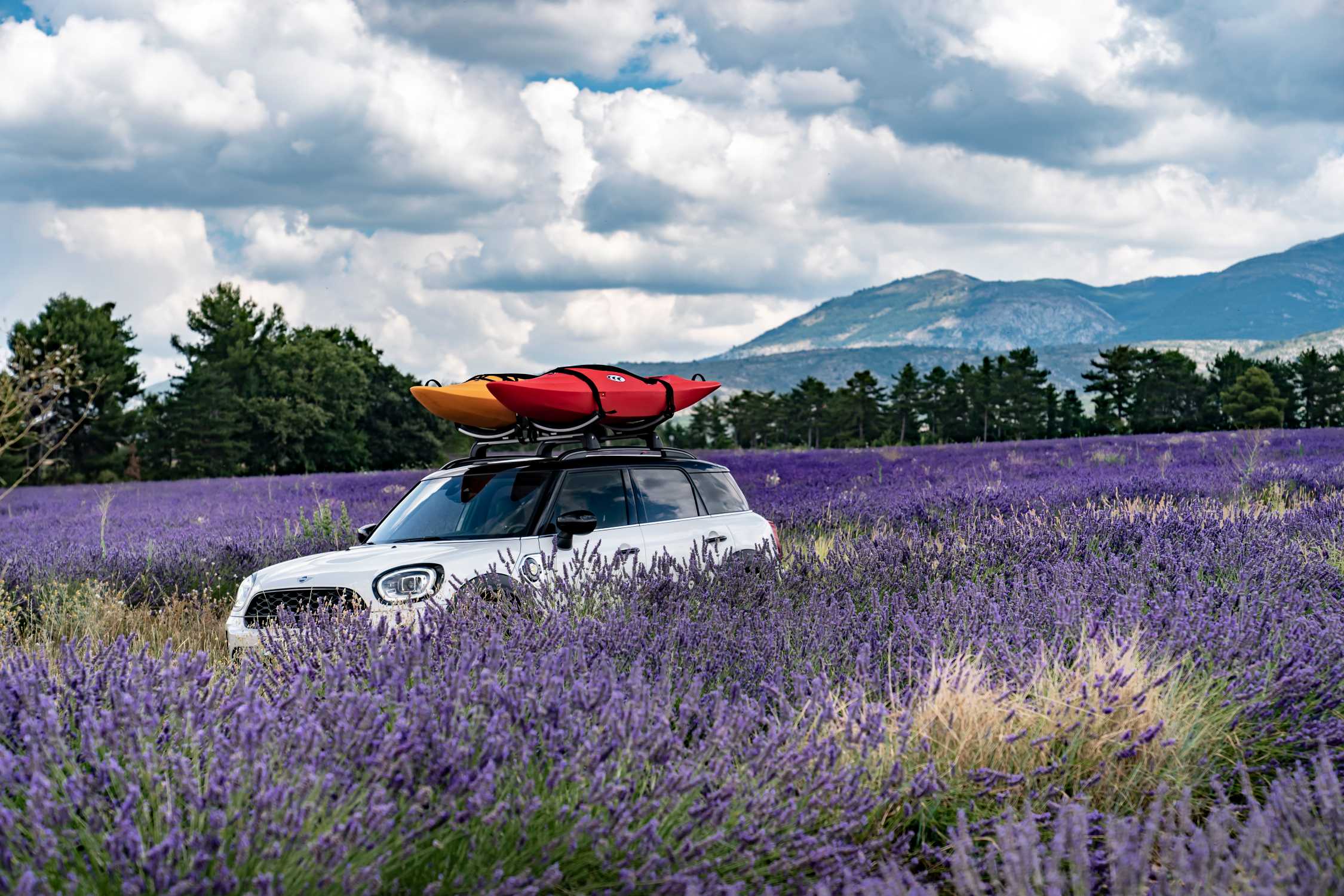 The locally replenished energy reserves powered by nature make the MINI Cooper SE Countryman ALL4 ready for zero-emission mobility on trips into the countryside around Lac de Sainte-Croix. Pressing the eDrive toggle switch suffices to switch the drive system to all-electric driving fun. In the MAX eDrive operating mode, the MINI Cooper SE Countryman ALL4 can then reach a top speed of 135 km/h powered solely by its electric motor. The storage capacity of its high-voltage battery gives the car a range of 55 to 61 kilometres on a leisurely drive through the picturesque landscape of southern Provence.

Short trips to places like the historic mountain village Moustiers-Sainte-Marie, the Renaissance castle in Aiguines or the lavender fields in the northern part of the Verdon nature reserve can be undertaken without any CO2 emissions whatsoever. The supply of electricity is even sufficient for a trip right round the man-made lake. And if the stunning landscape entices the occupants to take a spontaneous diversion, the internal combustion engine automatically springs into action.