The “Green Hell” is paradise for the new MINI John Cooper Works GP.

On the legendary Nürburgring Nordschleife, the British traditional brand’s fastest, most powerful model ever approved for road use demonstrates the full potential of its drive and suspension technology developed using John Cooper Works’ racing know-how.

Munich. Fascination and awe shine through when racing drivers speak about the "Green Hell". The Nürburgring Nordschleife is regarded as a particularly challenging track. Its spectacular bends, ascents and descents embedded in the wooded landscape once prompted the triple Formula 1 champion Jackie Stewart to coin the track’s nickname by which it is still fondly known today. For MINI development and test engineers, the Nordschleife is the ultimate performance indicator for every new model of the British premium brand. They dedicated themselves with particular intensity to testing the driving dynamics of the new MINI John Cooper Works GP. Lap after lap they fine-tuned the engine, chassis and aerodynamic properties until finally it was obvious that the new MINI John Cooper Works GP makes the legendary “Green Hell” a paradise for every motor racing fan.

Naturally the “Ring” owes its original name to the medieval castle of Nürburg constructed in the 12th century on a hill surrounded today by the Nordschleife. The most beautiful view of the castle ruins is from the village of the same name not far from the entrance to the race track. Otherwise, it is the new MINI John Cooper Works GP that becomes the photo scene of choice as it arrives for the so-called tourist drive on the Nordschleife. The closer it gets to the “Ring”, the more thrilled motor sport enthusiasts are, with smartphones at the ready, to encounter this true rarity. 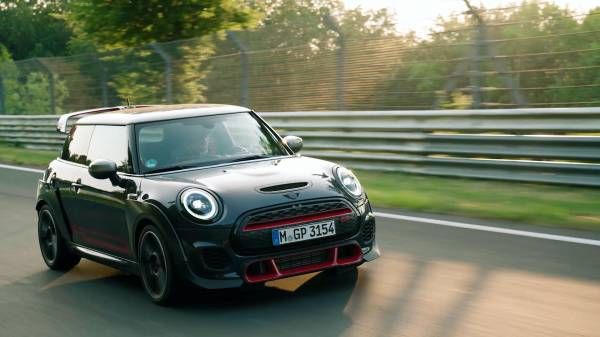 The new MINI John Cooper Works GP, produced in a small series of 3,000 units is the tradition-steeped brand’s fastest, most powerful model ever approved for road use. It takes extreme driving pleasure in a MINI to a whole new level. Testers even managed to drive a prototype of this extreme athlete round the almost 21 kilometre track in less than eight minutes. This beat the predecessor model’s best time by almost half a minute. They equipped the production vehicle with all the qualities necessary to ensure that even Nordschleife novices can experience the exhilarating race feeling in the new MINI John Cooper Works GP straight away. Thus on its return to the “Green Hell”, it quickly becomes clear that the latest John Cooper Works model outshines the competition in the small car segment not just in terms of longitudinal and lateral acceleration, but its greatest trump card is its precisely controllable handling at all times even in the driving dynamics limit range.

The distinctive appearance of the MINI John Cooper Works GP already impresses at the start line: Carbon wheel arch trims, a roof spoiler with double-wing contour, large 18” lightweight forged wheels and a 10 mm lower suspension than the MINI John Cooper Works hint unmistakably at the dynamic potential of the exclusive two-seater. Pressing the accelerator pedal merely confirms this impression: Sprinting towards the Tiergarten, it takes just 5.2 seconds to reach the 100 km/h speed mark in the digital instrument panel display. A 4-cylinder turbocharged engine with 225 kW/306 hp and a maximum torque of 450 Nm delivers this irresistible forward thrust. The concentrated energy reaches the front wheels fitted with model-specific high-performance tyres via an 8-speed Steptronic transmission which, complete with integrated differential lock, ensures the loss-free conversion of the drive torque into thrilling performance. 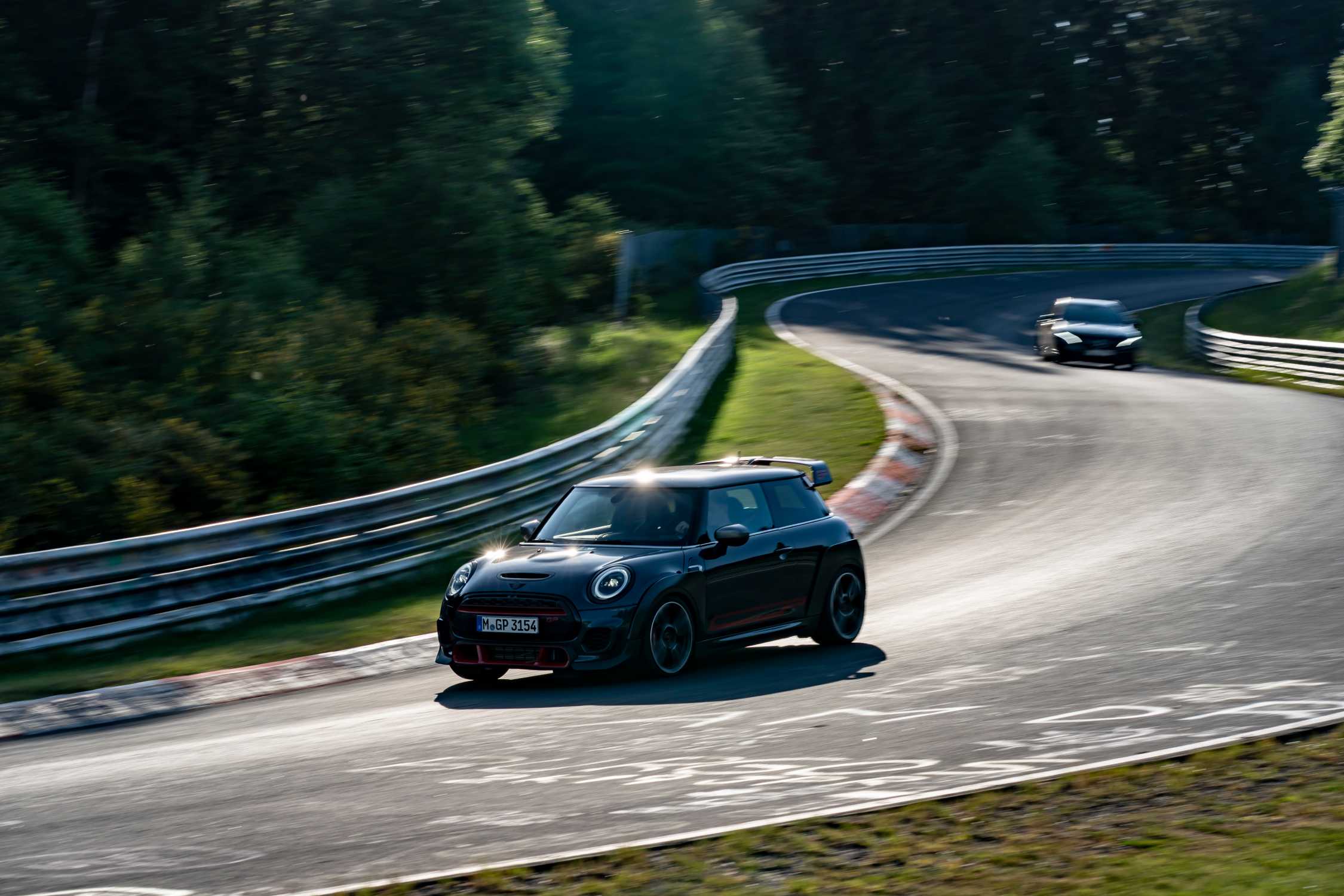 The advantages of the precise force distribution between the drive wheels also manifest themselves in the Hohenrain chicane. The steering of the new MINI John Cooper Works GP is remarkably agile and enables it to accelerate dynamically out of every corner with no oversteering or understeering tendencies. The sports brake system also inspires immediate confidence. The precise controllability and powerful grip of the 4-piston fixed-caliper disc brakes on the front wheels and single-piston floating-caliper disc brakes on the rear wheels decelerate the vehicle before it enters the ensuing, slightly downward left turn. By now at the latest, respect for the high performance of the new MINI John Cooper Works GP is transformed into unadulterated driving pleasure. The combination of right-left bends in the Hatzenbach is a pleasure too, as are the subsequent crests and the sharp right turn beyond the Schwedenkreuz.

The tight engine mounting, the extremely rigid body structure and suspension connection and the suspension technology refined with John Cooper Works’ racing expertise empower the new MINI John Cooper Works to deliver impressively precise steering behaviour. As if pulled by a string, it races through the winding track sections after Fuchsröhre and Adenauer Forst, successfully finding the racing lines almost effortlessly even in the Klostertal bend and in the Caracciola carousel. The large track widths and increased model-specific camber values for the front and rear wheels promote the transmission of cornering forces and facilitate breathtakingly high lateral acceleration values. In GP mode, activated by means of a toggle switch, the intervention thresholds of the Dynamic Stability Control (DSC) system are also increased to give the driver even more scope when approaching the limit range. 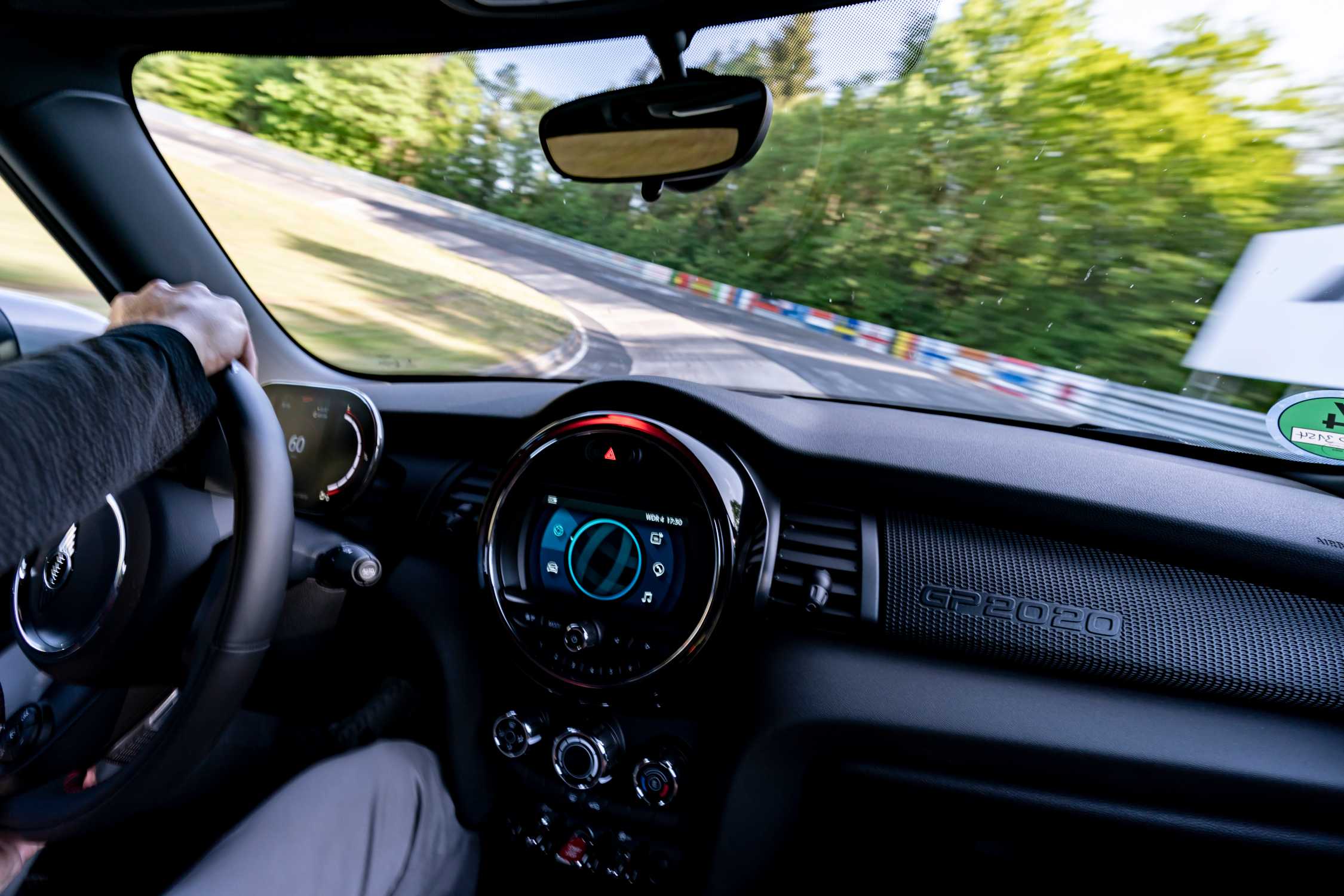 At 265 km/h, the top speed of the new MINI John Cooper Works GP is totally unlimited. And on the home stretch between Galgenkopf and Döttinger Höhe, it becomes apparent that the top athlete within the small car segment remains steadfastly on the chosen course even in high-speed mode. As well as the model-specific front apron, above all its distinctive roof spoiler plays a key role in reducing lift accordingly and guaranteeing aerodynamic balance even when cornering at particularly high speeds. However, the indispensable functional value of the striking double wing on the rear of the new MINI John Cooper Works GP does not stop it being misused unceremoniously as a picnic table by Nordschleife drivers during lunch stops.

On they motor after a short break including refuelling stop. Ultimately, a single lap of the Nürburgring comes nowhere near to capturing the full performance potential of the new MINI John Cooper Works GP. But luckily every finishing line is also a starting line. And when it comes to extreme driving pleasure, the gates of the “Green Hell” cannot open often enough.