Whether offshore, onshore or airborne, the Lake Constance region can be explored in various sporty or totally relaxing ways. Thanks to the roof and rear luggage rack systems from the Original MINI Accessories range, the MINI Cooper S 3-door becomes a versatile transport talent for a varied travel experience.

Munich. The countdown is on behind the scenes. But as soon as the go-ahead is given, hundreds of helpers come out in their droves. The grape harvest in Lake Constance is a spectacular event every year. Once the ripeness of the grapes and the outside temperatures perfectly match up, time is of the essence. For the late summer weather rarely remains settled for long. Miniature heavy goods vehicles now take over the roads in the wine-growing villages late into the night. The specially designed tractors – narrow enough to drive between the densely planted rows of vines, and powerful enough to pull the long, consistently full trailer loads – bring the precious grape crop to the wine presses as quickly as possible.

Manoeuvrability, agility, powerful motorisation and impressive load capacity are also evident in the MINI Cooper S 3-door on its tour of the Lake Constance region. The roof and rear luggage rack systems from the MINI Original Accessories range turn the premium compact car into a versatile transport talent in a few simple steps. Folding down the rear seat backrest, with its 60 : 40 split as standard, already increases its luggage compartment capacity from 211 to up to 731 litres. The MINI roof box with a capacity of 320 litres provides more luggage space. The lockable box has imprinted stripes and MINI logos. It can be opened on both long sides and be mounted on the MINI basic carrier, also available in the MINI Original Accessories range. Alternatively to these, roof bars together with the optional roof rails are available for the MINI 3-door. 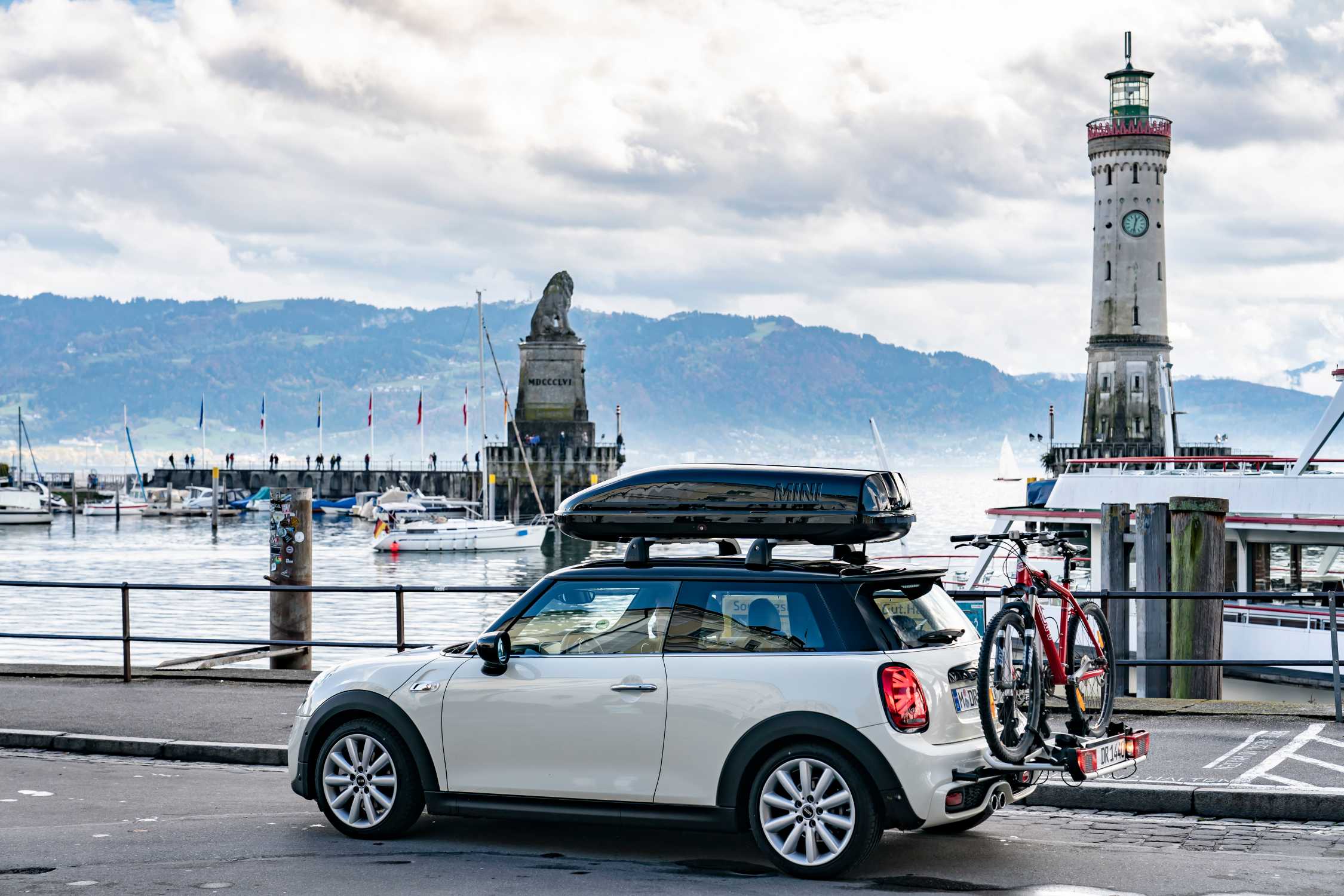 The model-specific rear luggage rack preparation is already available ex works too. It can be used with the MINI rear bike carrier, specially designed for the brand’s compact car models. This can transport two bikes reliably and safely. A fold-in function means the tailgate of the vehicle can be opened even when the rear luggage rack is loaded.

The MINI roof box and the MINI rear bike carrier lend an additional dimension to the brand’s hallmark creative use of space – and create the ideal conditions for a varied travel experience. The entire Lake Constance region has a well-signposted network of hiking trails and cycle paths, leading, often close to the shore, through tranquil villages or across the fruit- and wine-growing regions. Bodensee-Schifffahrt’s dense ferry network also ensures cross-border connections between the towns on the German, Austrian and Swiss lakeshores. You can take your bike with you on the passenger ferries, while car ferries operate a shuttle service between Meersburg and Constance and between Friedrichshafen and Romanshorn in Switzerland. This means visitors can make the most of Lake Constance on customised day trips – whether actively walking or cycling, totally relaxing on the water or cruising along lakeside roads in the MINI Cooper S 3-door. 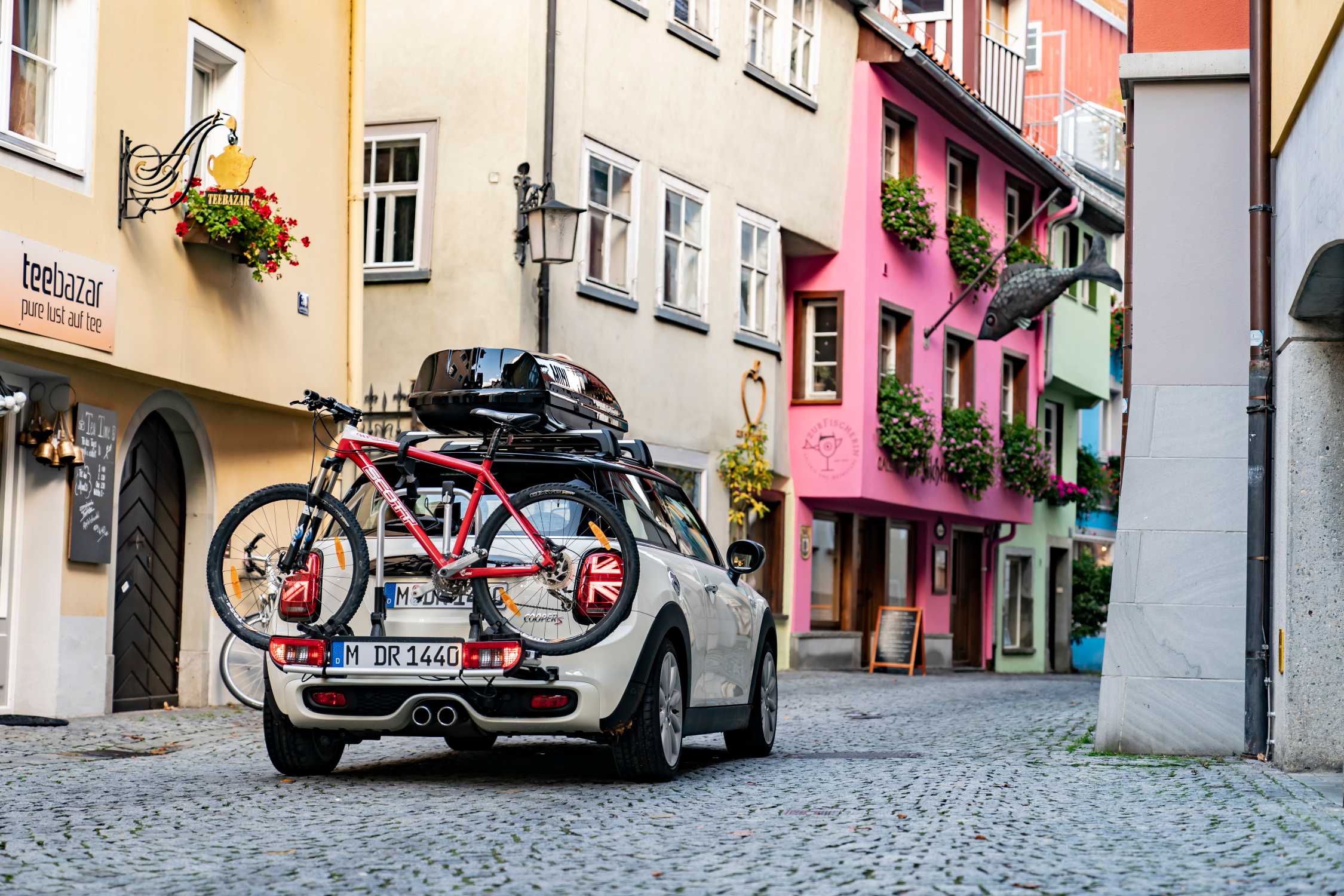 A favourite starting point for tours of Lake Constance is the Swabian district town of Lindau in the east of the region. Its old town centre lies on an offshore island in Lake Constance. The ferries also cast off from there, passing the lighthouse and a marble sculpture of the Bavarian lion as they sail out of the harbour. Narrow streets, shops, cafés, the old town hall built in 1422 and the carefully preserved 16th and 17th century houses give Lindau’s old town centre its charm. Sections of the historic fortifications even date back to the 11th century. The Mang Tower with its colourful glazed tiled roof denotes the end point of the city wall at the harbour. It served as lighthouse from 1180 to 1856, before its significantly taller successor in the harbour entrance was commissioned.

En route from Lindau to the wine-making region of Immenstaad, Hagnau and Meersburg, the MINI Cooper S 3-door passes the tradition-steeped industrial city of Friedrichshafen. Airships have been taking off there for 120 years, while the history of the “flying cigars” is insightfully documented in the Zeppelin Museum with numerous historical exhibits and modern installations. The museum also houses an extensive art collection. Visitors to Friedrichshafen can also set off on a sightseeing flight over Lake Constance in the latest generation Zeppelin. With flights lasting between 30 and 90 minutes on offer, the low cruising altitude of approx. 300 metres guarantees the best view of what’s happening on- and offshore.