Munich. BMW Motorsport returns to a historic venue with the DTM; Zolder, in Belgium, hosts round two of the 2019 DTM season from 17th to 19th May. It was here that the first ever DTM race was held in 1984. Back then, victory went to Harald Grohs (GER) in a BMW 635 CSi. The DTM last raced at Zolder in 2002. 17 years later, the touring car series now returns to the iconic circuit.

BMW DTM driver Marco Wittmann (GER) tops the Drivers’ Championship going into the race weekend at Zolder. At the Hockenheim season-opener a fortnight ago, Wittmann took pole position and the race win on the Saturday. He then started the Sunday race from second place on the grid, before finishing eighth to pick up more valuable points. Wittmann has 34 points to his name after the first two races of the season.

22 DTM races have been held at Zolder since 1984. BMW drivers have been involved in 21 of those and have racked up nine victories and 24 podium finishes in total. The Zolder race weekend is the first home outing in the DTM for Belgian outfit BMW Team RBM.

Quotes ahead of the DTM races at Zolder.

“Zolder has an important place in the history of BMW Motorsport. Harald Grohs won the first DTM race ever there in 1984, at the wheel of the BMW 635 CSi. Many more successes were to follow between then and 1992. We are now looking forward to returning to this iconic racetrack with the new DTM. Bearing in mind the 2019 generation of cars, it is obviously a new circuit for everyone. We are very intrigued to see how the competition develops at Zolder. We had a very successful opener at Hockenheim, with two pole positions and one win. We want to back that up now in Belgium. The race weekend is particularly important for BMW Team RBM; the circuit is just an hour’s drive from the team headquarters.”

“It is going to be an exciting weekend, as Zolder is a new venue for us in the DTM. Our first goal is to prepare as well as possible, and thus to lay the foundation for another good weekend. We must wait and see how we cope with the track. We do not have any experience there and the last time I was at Zolder was over 20 years ago. I have particularly fond memories of the circuit, as Zolder was the opening round of the race series in which I gained my first experience as a team principal at the end of the 1990s.”

“I don’t know the circuit at Zolder yet, but it is cool to go to a new track, at which I have never driven before. I am very excited to see what it is like there, and how we perform. We have seen that we have a good car, both in wet and dry conditions. We still need to work on being a bit stronger for the full race distance. On the whole, however, we have a good package in the new BMW M4 DTM and the team has done a superb job. It is still a little difficult to set any definite expectations for Zolder, as I don’t know the circuit. I’ll wait and see how it pans out and am looking forward to a new track.”

“I do know Zolder, but it is 12 years since I raced there in Formula BMW. It is a very tight little circuit with few straights – not your typical DTM racetrack. I think qualifying will be extremely important, as overtaking could be tricky at Zolder. The kerbs in the chicanes will be a big issue – whether we should drive over them or are better off avoiding them in the DTM car. Friday’s first practice session is definitely going to be interesting. It is a new racetrack on the calendar, so we must try to adapt to it quickly and find a good rhythm from the word go. Then we can hope for a good second race weekend of the season.”

“I only know Zolder from what I have seen on TV and I am already very excited about what awaits us there, particularly as our car is still very new. As such, it will be a challenge to adapt to it in the short amount of track time we have at our disposal. I will look at more onboard footage and, together with the team, prepare as well as possible for Zolder. I am looking forward to a new racetrack and a new challenge.” 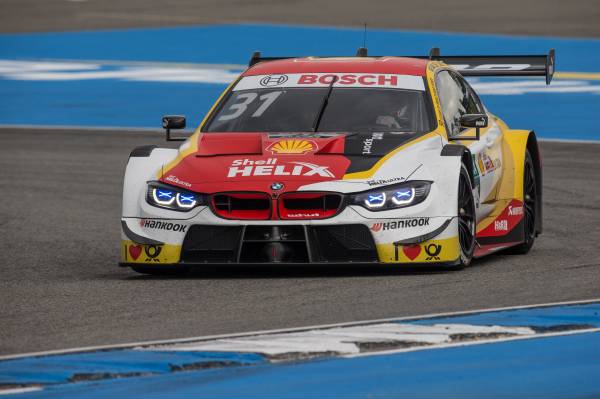 “I’m very happy that we have an event in Belgium. I think that it will be received very well, and the organisers at Zolder are working very hard to make it a successful event. Actually, I have to admit that I don’t have too much Zolder experience. The last time that our RBM team participated there was in 2010 in the FIA WTCC and we won a race. It will be interesting to race there now with the new turbo-powered BMW M4 DTM. Zolder is a slow track, yet we will go there with massive power and with a lot of straight-line speed, so braking will be very important. I hope that we keep on making progress as we did at Hockenheim. We need to carry the momentum from Sheldon’s P6 on Saturday and Philipp’s pole position and P4 on Sunday into the next event. We had a good season-opener and just need to continue working and try to carry on at Zolder.”

“I raced at Zolder in the 2017 Blancpain GT Series with the BMW M6 GT3. The track is extremely technical. I really like it. The kerbs are very high and we must be careful not to damage the cars. It is certainly going to be an exciting weekend. I think overtaking could be possible, but a good performance in qualifying will be important again. I hope to be among the front-runners again, as I was on the Sunday at Hockenheim.”

“Zolder is going to be a cool one. It’s obviously my first time there, and I am new to the DTM, so I’m going to have a lot to learn. However, I think we showed at Hockenheim that we can learn quite quickly so I’m looking forward to it. I’ve learned so much already in just the two races that I did at the season-opener and I want to build on that. I’m tenth in the championship, which I think is not bad at all. I will take that positive to Zolder.”

“Actually I don’t really know what to expect from Zolder. I’ve never been there, but on the simulator the track looks like it should be fun to drive. My brother raced there two years ago and he told me that it’s a really cool track. We will go there, have a first look at the track and then take it from there.”