The new BMW X3 will be released in November, shortly after its world premiere at the IAA International Motor Show in Frankfurt. An extensive global campaign entitled “On a Mission” will accompany the launch of this successful model. Campaign highlights include a rousing TV spot with extreme athletes and a 360° virtual reality test drive on Mars, with continuation of the campaign in digital channels.

Munich. The new BMW X3 will be released in November, shortly after its world premiere at the IAA International Motor Show in Frankfurt. An extensive global campaign entitled “On a Mission” will accompany the launch of this successful model. Campaign highlights include a rousing TV spot with extreme athletes and a 360° virtual reality test drive on Mars, with continuation of the campaign in digital channels.

The “On a Mission” campaign presents the BMW X3 as free-spirited and independent, always ready to push the boundaries. The theme of venturing off the beaten track and discovering new horizons is underlined by the off-road character of the SAV and its ground-breaking innovations. A key idea is the passion that transforms a job or a hobby into a mission. This appeal to the emotions is a common thread throughout the campaign: BMW celebrates people who pursue their dreams with relentless passion – people who are on a mission.

“‘On a Mission’ pays tribute to a life full of passion, inner drive and true dedication. The BMW X3 brings this dynamic to the automotive world and guarantees a thrilling driving experience, no matter where your passion takes you,” explains Hildegard Wortmann, Senior Vice President Brand BMW. 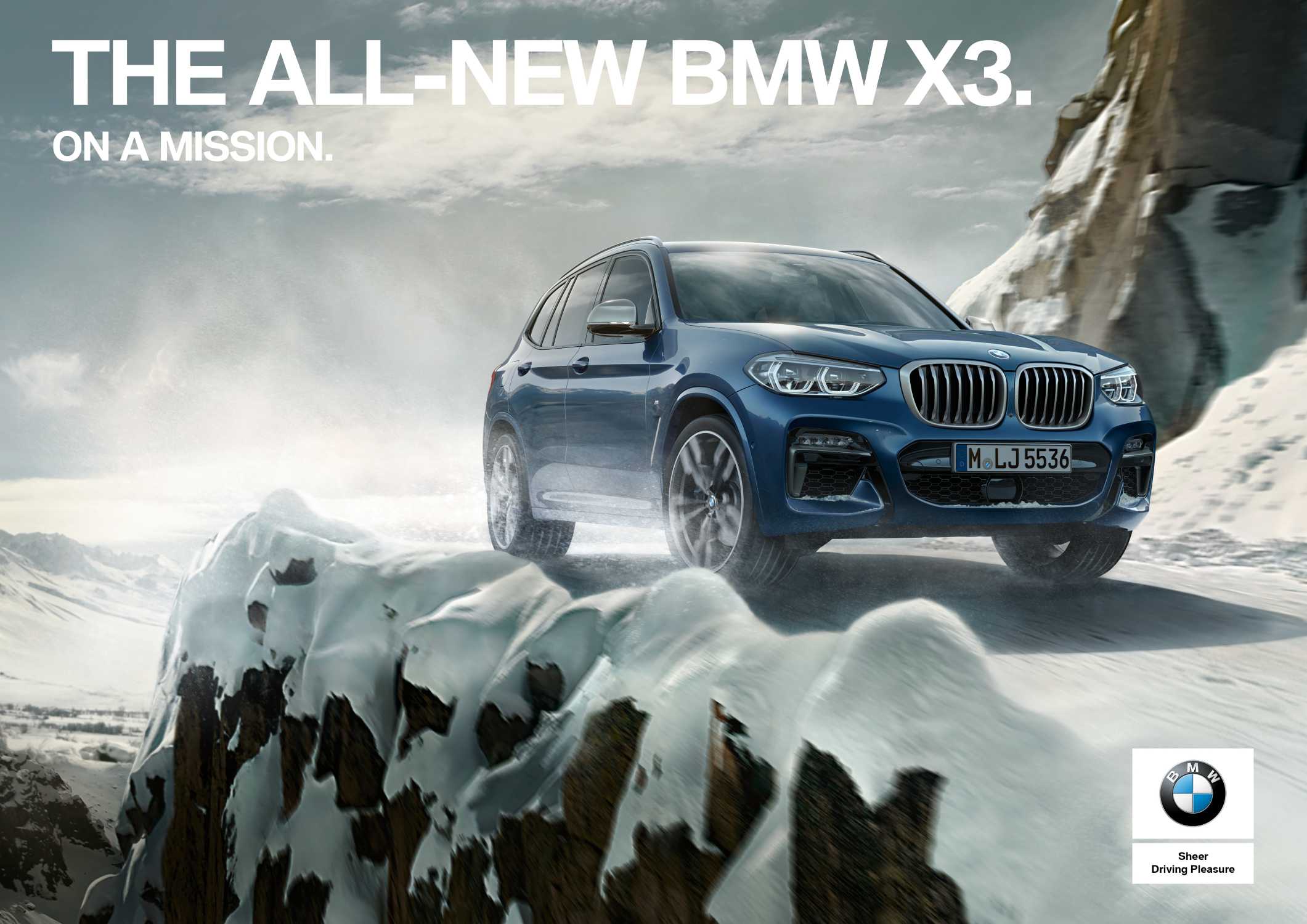 Campaign development started out with a widescale interdisciplinary big data analysis that gathered and evaluated information about different BMW X3 buyer groups. This allowed BMW to consider the interests and media use of its future customers already in the creative phase of the campaign. As a result, the BMW X3 campaign delivers highly-relevant content that appeals to a young and dynamic digital target audience and fits perfectly into their world of experience. However, rollout through the appropriate channels is just as important as the content itself. Social media and the brand’s own online presence will therefore be a priority for “On a Mission”.

On a mission to Mars.

The communications highlight of the campaign is clearly a very special test drive: Using virtual reality, the BMW X3 takes customers and fans on the world’s first test drive through the breath-taking scenery of Mars – quite literally pushing the boundaries. Spectacular images and evocative sounds transform the trip to Mars into an immersive experience. During a virtual reality drive across the atmospheric and ever-changing surface of the planet – reminiscent of a Hollywood film – different features of the BMW X3 are presented as part of the “BMW Personal Co-Pilot”.

The 360° experience can be enjoyed on all widely-available smartphones through YouTube or using VR glasses, and will be integrated into the BMW brand’s own online channels. The Mars mission will also be shown at selected BMW dealers and branches and integrated into brand events and mailings using Google Cardboard.

“With the BMW X3 Mars mission we once again offer our customers and fans a unique experience – something completely new they have never seen before,” says Uwe Dreher, head of Brand Communications BMW, BMW i, BMW M. “For me, that is how marketing should be: surprising, modern, with an entertaining wow effect.”

The TV commercial features protagonists who live for their mission: The BMW X3 accompanies Swede Freddie Meadows as he ice-surfs in the Arctic; free mountain rider Martin Söderström on his daredevil ride across rocky ridges; and extreme campers Fatima Gil and Vicky Vega perched on the slopes of steep rock walls. The stunning natural surroundings showcase the off-road character and dynamic performance of the new BMW X3. That the TV spot uses only real-life extreme athletes, not actors, underlines the authenticity and passion of the powerful SAV.

The launch film, which will primarily be used for online communications, shows photographer Pablo Durana on a tour through the Chilean Andes with extreme mountain-biker Trond Hansen. As well as highlighting many aspects of the new BMW X3, it also features the SPECIALIZED for BMW Turbo Levo FSR 6Fattie mountain bike, an exclusive cooperation between BMW and premium bike manufacturer SPECIALIZED.

The TV commercial and launch film also provide the basis for a series of short clips that will run in all BMW-brand social media channels and digital advertising spaces. In this way, the activities “surfing”, “mountain biking”, “camping” and “art” can be targeted towards users with those interests to amplify the reach of the BMW X3.

The films’ protagonists are an integral part of all elements of the campaign and also appear in the print motifs. In this way, “On a Mission” creates a consistent presence with high recognition value across all channels. The campaign will also make use of the many protagonists’ own social media channels and their vast fan communities.

Based on the Facebook Canvas ad, BMW has developed an extensive interactive vehicle visualiser, with a level of detail and range of functions not previously seen on this platform. Users have fun creating their own individual BMW X3 directly in the Facebook app, choosing their preferred design line, paint colour, wheel rims and interior configuration.

The visualiser consists of 64 nested individual Canvas ads. This was a major challenge for both planning and realisation. The visualiser will be rolled out through the international BMW Facebook account and local BMW markets. The interactive experience ends with an invitation to test-drive the new BMW X3.

“The visualiser on Facebook represents a totally new way for us to generate leads through social media,” explains Uwer Dreher. “Implementation with so many individual Canvas ads was definitely complex and challenging. But we are very proud to be able to offer our fans this unique feature.”

Exciting product collaborations and the BMW brand’s popular winter-sports activities, under the name “BMW Mountains”, will further enrich the campaign.

BMW Lifestyle and premium bike manufacturer SPECIALIZED will be presenting an exceptional mountain bike: a limited special edition of the Specialized Turbo Levo, the SPECIALIZED for BMW Turbo Levo FSR 6Fattie. The two premium brands share a unique passion for sporty dynamics, a love of innovative design and technologies, and constantly strive to reinvent themselves.

Under the “BMW Mountains” banner, the BMW X3 is supporting the “No Man’s Land” expedition of extreme skiers Matthias Mayr and Matthias Haunholder, as they attempt to become the first to ski down Mount Tyree in the Antarctic. The BMW X3 will be their trusty companion on the journey from Buenos Aires to Punta Arenas. Once they reach Antarctica, they will cover several hundred more kilometres on skis and by kite. BMW will follow the expedition with live feeds and stories in its own digital channels. A film about the adventures of the two extreme skiers will be released to the general public in 2018. 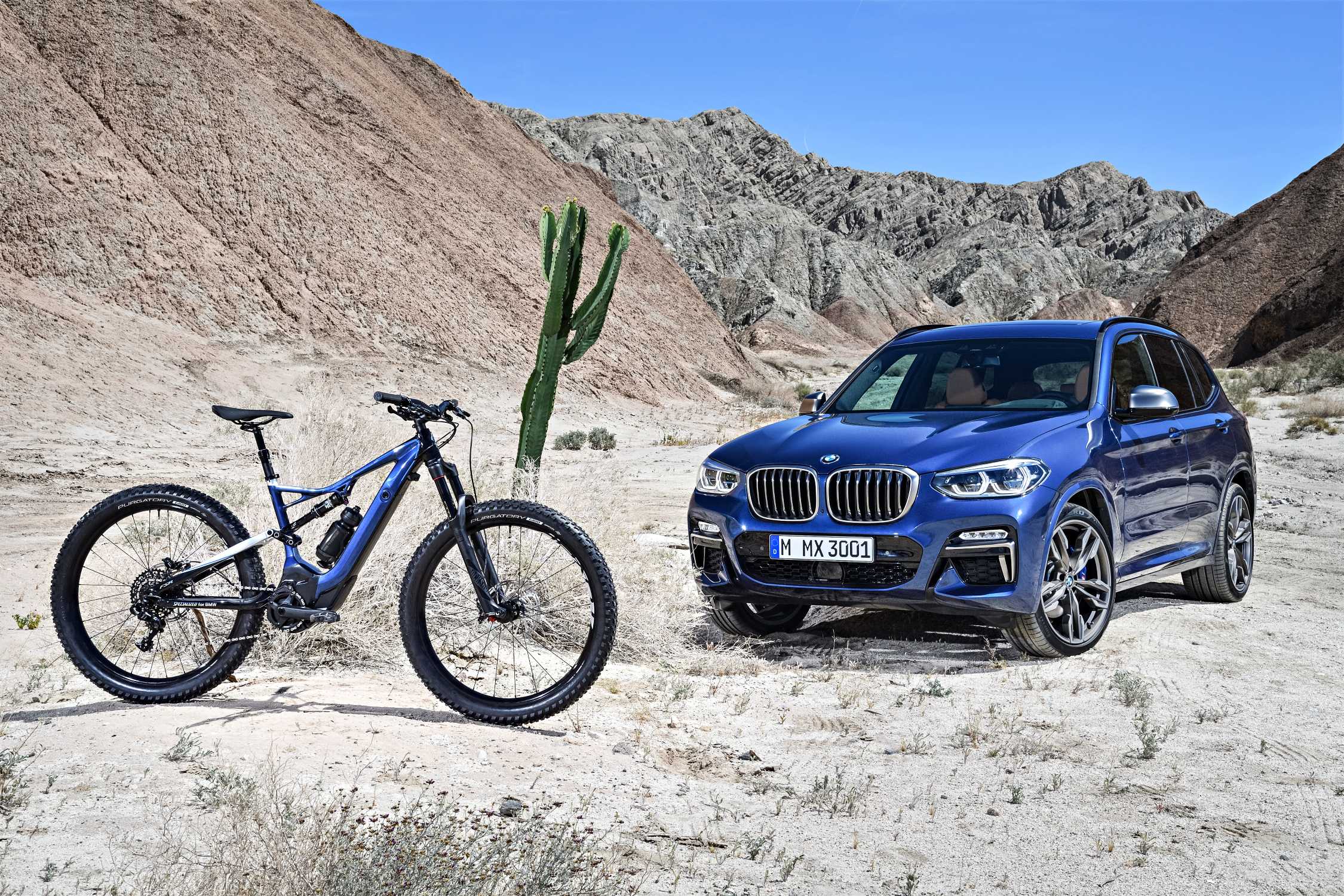 Successful member of the X family.

BMW created the mid-sized SAV (Sports Activity Vehicles) segment in 2003 with the BMW X3. More than 1.5 million units of the first two model generations have since been sold worldwide. The new BMW X3 is now set to continue this success story, with even more striking and dynamic styling and a luxurious interior. Like all members of the successful X family, it combines outstanding ride quality in all terrains with unlimited everyday practicality. The new BMW X3 also offers the highest level of connectivity and driver assistance systems. Ground-breaking innovations, which BMW combines under the name “BMW Personal CoPilot” and which are usually reserved for the business and luxury segments, are available in the mid-size class for the first time in the new BMW X3. The interior finish has also been significantly upgraded. Inside, the new X3 boasts nearly all the features of the new 5 Series and impresses with the high level of workmanship more familiar from the BMW 7 Series.

With its four brands BMW, MINI, Rolls-Royce and BMW Motorrad, the BMW Group is the world’s leading premium manufacturer of automobiles and motorcycles and also provides premium financial and mobility services. As a global company, the BMW Group operates 31 production and assembly facilities in 14 countries and has a global sales network in more than 140 countries.