The BMW Group has delivered more than 100,000 electrified vehicles to customers worldwide in 2017, as promised at the beginning of the year. This underlines the company’s leadership role when it comes to electro-mobility. An eye-catching light installation will mark this milestone on the road to the mobility of the future, with the BMW Group headquarters, the world-famous “Four-Cylinder” in the north of Munich, transformed into a battery.

Munich. The BMW Group has delivered more than 100,000 electrified vehicles to customers worldwide in 2017, as promised at the beginning of the year. This underlines the company’s leadership role when it comes to electro-mobility. An eye-catching light installation will mark this milestone on the road to the mobility of the future, with the BMW Group headquarters, the world-famous “Four-Cylinder” in the north of Munich, transformed into a battery. The BMW Group selected this glowing symbol to represent the technological change taking place in mobility.

“We deliver on our promises,” said Harald Krüger, Chairman of the Board of Management of BMW AG. “This 99-metre-high signal is lighting the way into the era of electro-mobility. Selling 100,000 electrified cars in one year is an important milestone, but this is just the beginning for us. Since the introduction of the BMW i3 2013, we’ve delivered over 200,000 electrified cars to our customers and by 2025, we will offer 25 electrified models to our customers. Our early focus on electro-mobility has made this success possible – and electro-mobility will continue to be my measure for our future success.”

Flexible electrification across all model series

Electro-mobility is an essential element of the NUMBER ONE > NEXT corporate strategy, which continues to expand the BMW Group’s position as the leading provider of individual premium mobility and mobility services. By 2025, the company will offer 25 fully electric and plug-in hybrid models worldwide. The fifth generation of electric drive train and battery technology, available from 2021, uses scalable, modular electrification kits that will allow all model series to be fitted with every type of drive train. For its BMW i electric brand, which was founded in 2011, the company has already secured the naming rights from BMW i1 to i9, as well as from BMW iX1 to iX9. Next year will see the launch of the BMW i8 Roadster, followed in 2019 by a fully electric MINI; in 2020, by the electric version of the BMW X3 and in 2021 by the brand’s new technology flagship, the BMW iNext, which will combine electro-mobility with autonomous driving and new interior connectivity options for the first time in a series-production model.

The BMW Group adopted a holistic approach to electro-mobility early, when it launched project i, the trailblazer for BMW i, back in 2007. By the following year, electric test fleets took to the roads worldwide in the largest wide-scale EV field trial the automotive industry had ever seen. Series production of the fully-electric BMW i3, one of the most-awarded vehicle concepts in the world, began in 2013. Since then, sales have increased every year, for the past four consecutive years.

Electrified models are in especially high demand in western Europe and the USA, for example, where they account for seven per cent of total BMW brand sales in both markets. In Scandinavia, where the BMW i3 is the best-selling BMW model, one in four BMWs sold is electrified. In Germany, new registrations of fully-electric and plug-in hybrid BMW Group vehicles will reach more than 10,000 units this year. Electrified drive trains also play an increasingly important role in the engine mix for individual models: In 2017, every tenth model of the highly successful BMW 3 Series Sedan delivered to customers worldwide was electrified. In the case of the BMW 2 Series Active Tourer, 13 per cent of the models sold in 2017 were plug-in hybrids. Since its launch in June 2017, the MINI Cooper S E Countryman ALL4 (combined fuel consumption of 2.3-2.1 l/100km; CO2 emissions of 52-49 g/km) already accounts for one in ten of MINI Countryman sales around the world. Sales of the all-electric BMW i3 also increased by around a quarter. (All figures YTD November 2017.)

Complementing the nine electrified four-wheel vehicles offered by the BMW Group, the company also manufactures the ideal two-wheeled product for premium urban electro-mobility: the BMW C evolution. Following the introduction of a new battery, which extends the scooter’s range to 160km, sales of this electrified scooter have grown by 80% compared to the first 11 months of last year. The 1,500 units sold around the world are in addition to the 100,000 electrified automobiles the company has sold in 2017. 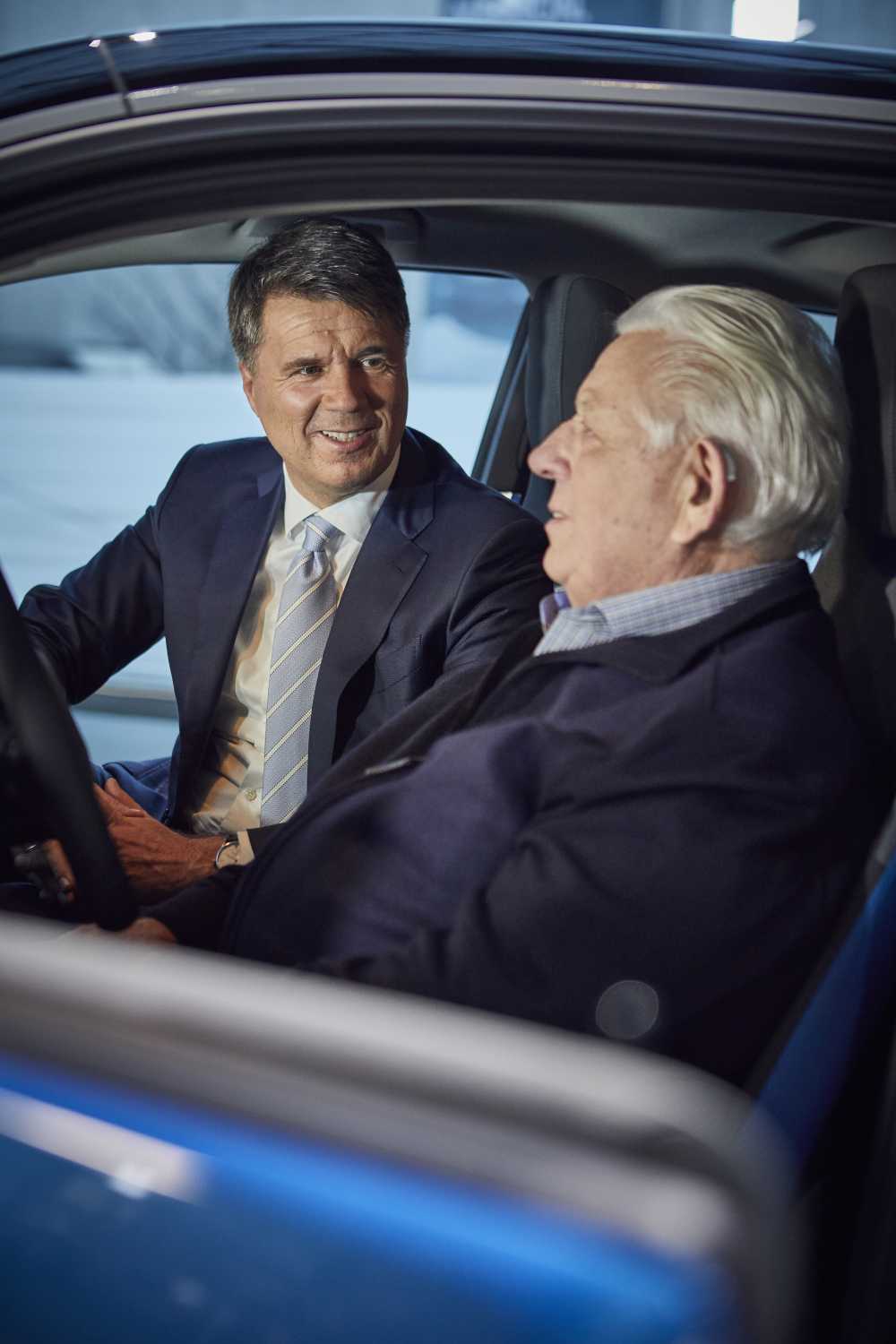 Ceremonial handover at the BMW Welt

One of these many customers worldwide experienced a special surprise today: An 80-year-old driver from the North Rhine-Westphalia region of Germany collected his BMW i3 in Protonic Blue at BMW Welt in Munich this afternoon, making him the 100,000th customer worldwide to choose an electrified BMW Group vehicle this year. Harald Krüger, Chairman of the BMW AG Board of Management, welcomed him to the BMW Welt and personally handed over the keys to the new car, commenting, “the excitement connected to electro-mobility is felt by all generations and handing over the 100,000th electrified car we’ve brought to the streets this year is a very special moment for me.”

To celebrate this important milestone, the iconic BMW “Four-Cylinder” headquarters tower is being transformed by a lighting installation into four upright batteries, representing the forward thinking which is a fundamental part of BMW’s DNA. The special illumination will be projected onto the building on the evening of 18 December 2017 from 8:00 p.m. until midnight. The project was implemented in collaboration with the cultural organisation Spielmotor Muenchen. This public-private partnership between the City of Munich and the BMW Group was founded in 1979 with the aim of bringing cultural diversity to Munich and establishing and expanding the city’s role as a national and international cultural destination.

With its four brands BMW, MINI, Rolls-Royce and BMW Motorrad, the BMW Group is the world’s leading premium manufacturer of automobiles and motorcycles and also provides premium financial and mobility services. As a global company, the BMW Group operates 31 production and assembly facilities in 14 countries and has a global sales network in more than 140 countries.