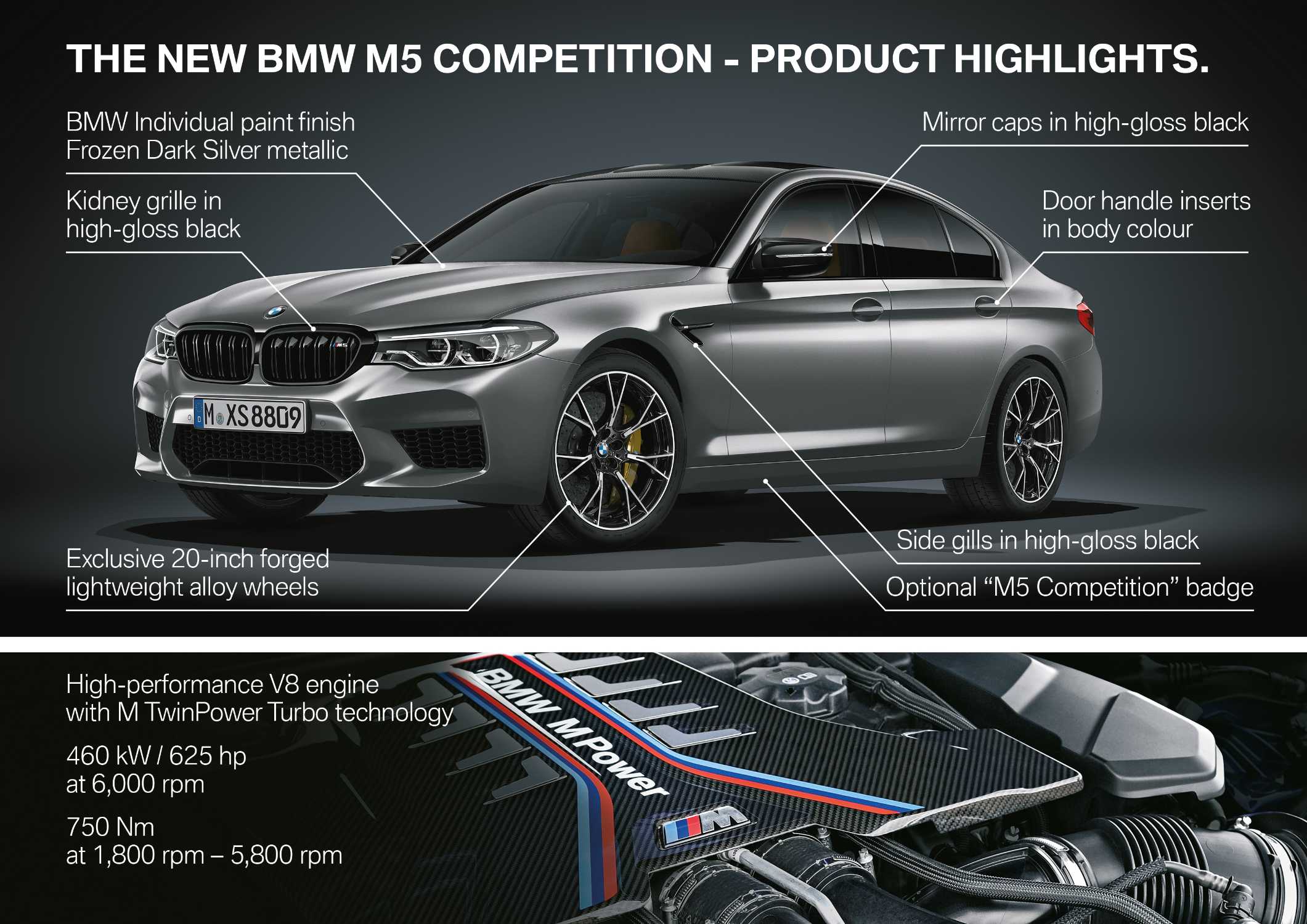 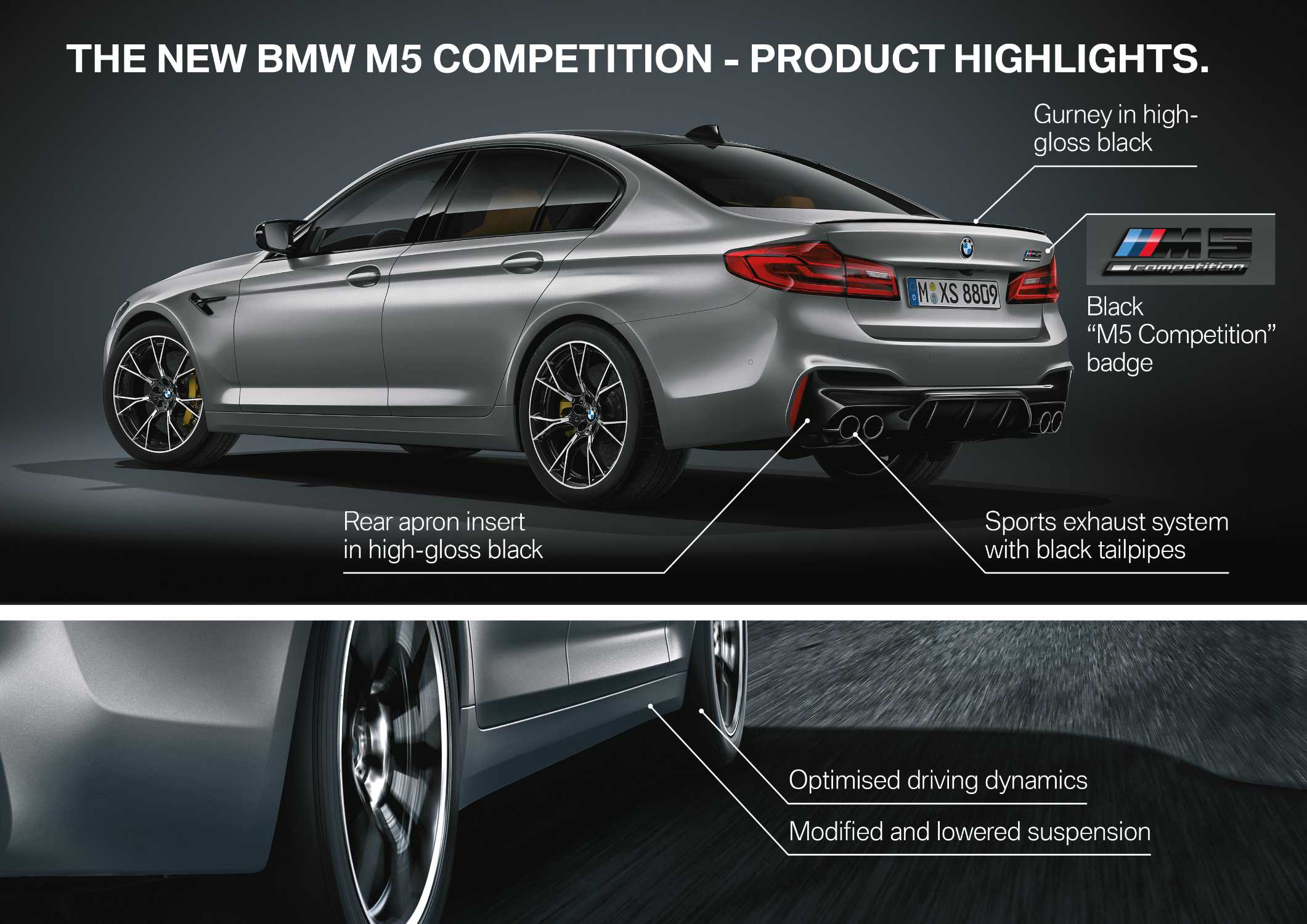 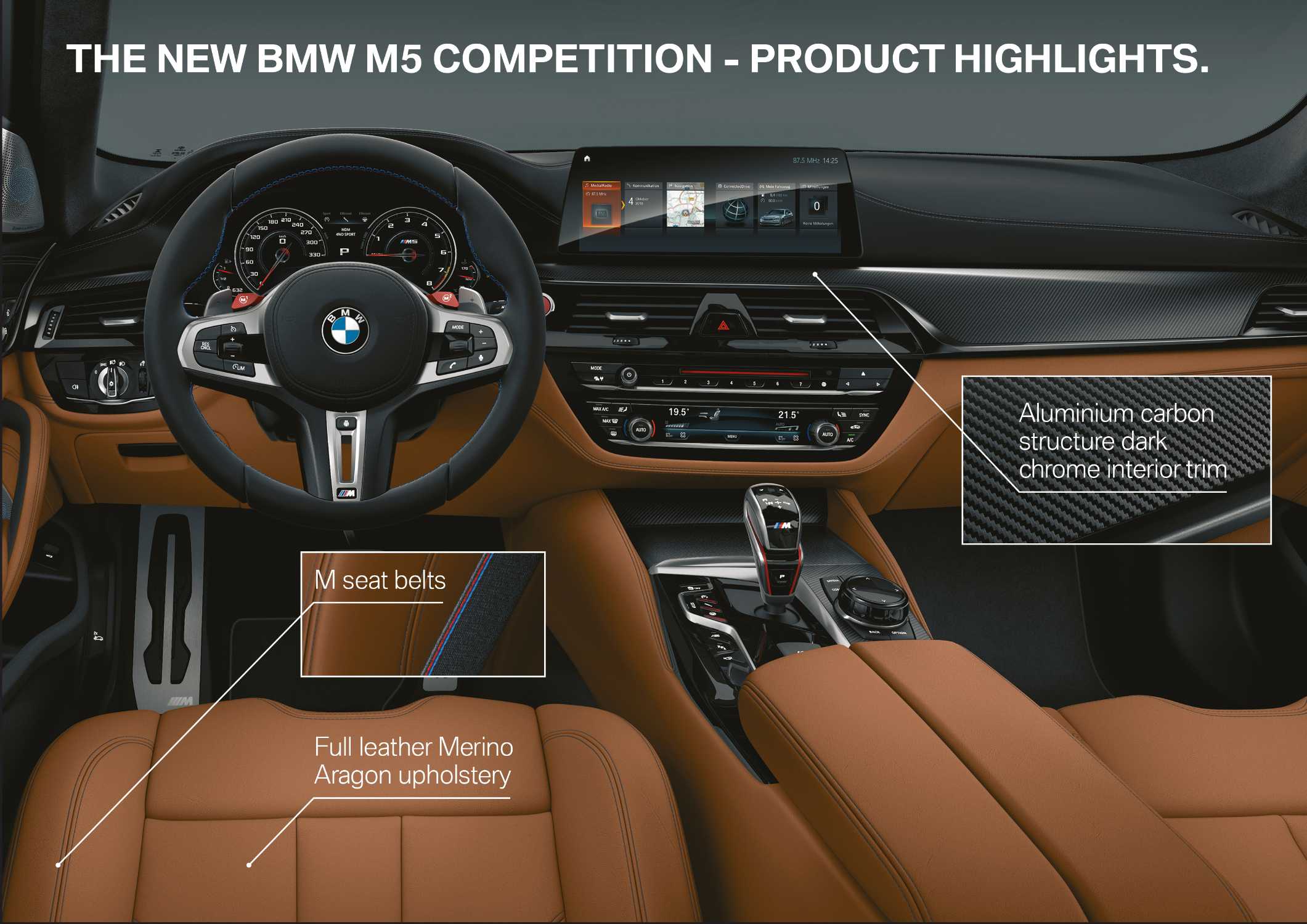 The new BMW M5 Competition high-performance sedan (fuel consumption combined: 10.8 - 10.7 l/100 km; CO2 emissions combined: 246 – 243 g/km)* brings together exceptional performance and a suitably rarefied aura with the unruffled ease in everyday use for which BMW M models are renowned. A 19 kW/25 hp hike in engine output over the standard version of the new BMW M5 (to 460 kW/625 hp), even more direct responses and bespoke chassis tuning ensure a race-inspired driving experience at all times.

The market launch of the new BMW M5 Competition heralds the creation of a new product category. In future, BMW M GmbH will offer the most powerful variants of its high-performance cars as standalone models.

The engine: more power and a distinctive brand of performance.

The performance-driving experience that defines the character of the new BMW M5 Competition has a deep emotional richness – and is rooted in the distinctive way its engine goes about its business. The 4.4-litre V8 unit with M TwinPower Turbo technology now produces maximum output of 460 kW/625 hp at 6,000 rpm. Peak torque is 750 Newton metres (553 lb-ft) and can be enjoyed across an extremely wide rev range – from 1,800 to 5,800 rpm (i.e. a 200-rpm wider band than in the standard version of the new BMW M5).

The high-revving instincts of the eight-cylinder engine are therefore harnessed to give the new BMW M5 Competition imposing levels of thrust. The car’s unique power delivery makes its presence felt in reducing the Competition’s 0 to 100 km/h (62 mph) time to 3.3 seconds. Furthermore,
0 – 200 km/h (124 mph) is over in 10.8 seconds – 0.3 seconds quicker than in the standard version of the new M5.

Standard specification for the new BMW M5 Competition includes a model-specific M Sport exhaust system with tailpipe embellishers in black chrome. This version of the twin-pipe, flap-controlled exhaust generates a strikingly prominent soundtrack. Meanwhile, the addition of a particulate filter to the Competition’s armoury enables a further reduction in emissions.

The new BMW M5 Competition features model-specific engine mounting, which also has a noticeable impact on its performance abilities. The engine mounts have modified characteristics and an increased spring rate, and the drive unit’s firmer connection to the vehicle’s structure results in even more direct engine response and immediate transmission of its power to the drivetrain. The car also turns into corners with noticeably greater directness and precision on account of the mounting’s stiffer characteristics.

The task of relaying the new BMW M5 Competition’s engine power is again handled by the eight-speed M Steptronic transmission. Three different modes offering a choice of efficient, sporty or ultra-dynamic driving can be activated using the Drivelogic rocker switch on the gear selector.

Having made its debut in the standard version of the new BMW M5, the M xDrive all-wheel-drive system now also feeds the further increased power of the BMW M5 Competition onto the road with poise, assurance and thrilling alacrity. It generates just enough extra traction to achieve acceleration times worthy of a super-sports car. The centrally controlled interaction between M xDrive and the Active M Differential is largely responsible for channelling the engine’s remarkable output to the car’s wheels without any loss of power en route. The rear-biased setup of the M xDrive system is another contributory factor in the tremendous agility of the high-performance sedan. Plus, a rear-wheel-drive-only setting (2WD) allows experienced and skilled drivers to revel in the experience offered by past generations of the BMW M5 – i.e. handling in its purest form, with no control systems holding the car back.

Individually tuned chassis for the ultimate in precision and performance.

Like every BMW M car, the new BMW M5 Competition is equipped with chassis technology matched perfectly to the performance characteristics of its engine. The associated modifications ensure precisely controllable handling at all times, even in extremely dynamic driving situations. As well as lowering the vehicle by seven millimetres, the model-specific chassis tuning also includes judicious tweaks to the wheel suspension, springs and dampers.

The increased camber at the front axle enhances the car’s ability to absorb lateral forces through high-speed corners. Fitting the toe links with ball joints instead of rubber mounts has resulted in even more precise wheel guidance at the rear axle. And the rear anti-roll bar also has a firmer spring rate. The front axle of the new BMW M5 Competition is equipped with a newly designed mounting for the anti-roll bar. Making the springs at the front and rear axles ten per cent stiffer than on the standard version of the new BMW M5 has produced a firmer ride, which also has a positive impact on steering response. Plus, shorter auxiliary springs reduce fluctuation in wheel loads, as does the unique tuning of the damper hydraulics. Consequently, the direct connection with the chassis can also be clearly felt in Comfort mode. Selecting Sport mode activates the damper settings perfected for testing on the Nürburgring’s Nordschleife circuit, while Sport Plus lends itself to ultra-dynamic driving on grand prix tracks.

Standard specification for the new BMW M5 Competition includes exclusive M light-alloy wheels sporting a Y-spoke design in a bi-colour finish. The 20-inch forged wheels are shod with mixed-size tyres measuring 275/35 R 20 at the front and 285/35 R 20 at the rear.

The exclusive feel of the new BMW M5 Competition is further enhanced by a selection of other model-specific design features. BMW Individual high-gloss Shadow Line trim is complemented by the use of discreetly sporty high-gloss black for the kidney grille surround, the decorative mesh of the signature BMW M gills in the front side panels, the trim for the rear bumper covering and the exterior mirror caps. Another special feature are the door openers, which are painted fully in the body colour. The rear spoiler and “M5” boot lid badge – which gains “Competition” lettering – also come in high-gloss black.

Inside the car, an understated stripe design in BMW M GmbH colours for the seat belts, plus floor mats with special piping and “M5” logo, point to the exclusive character of the new BMW M5 Competition. A further identifying feature is the “M Competition” graphic that appears in the instrument cluster to greet the driver when it is starting up.