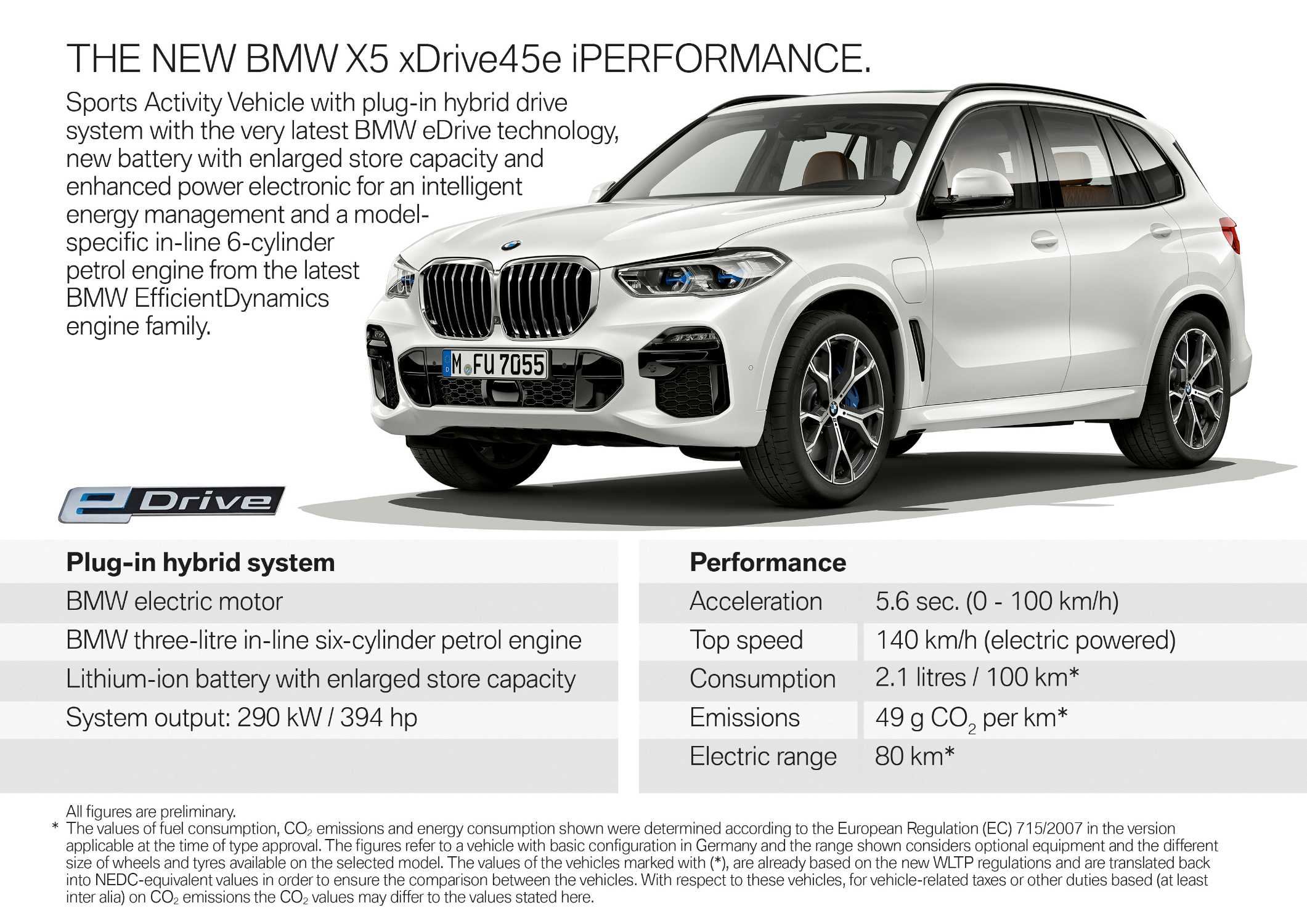 Munich. Efficiency meets supremacy: the drive portfolio of the new BMW X5 is to be extended in the course of 2019 with the addition of a plug-in hybrid system. The new BMW X5 xDrive45e iPerformance combines a model-specific in-line 6-cylinder petrol engine featuring BMW TwinPower Turbo Technology with the very latest BMW eDrive technology. Consistent progress in the area of plug-hybrid drive has produced a system output now increased to 290 kW/394 hp, a tangible enhancement in terms of electrically powered range and a significant reduction in fuel consumption and CO2 levels as compared to the predecessor model.

More impressively than ever, the second generation of the plug-in hybrid model combines the purely electrically powered driving pleasure of a BMW iPerformance automobile with the versatility that is typical of a Sports Activity Vehicle (SAV). In doing so, the new BMW X5 xDrive45e iPerformance offers optimised qualities in terms of both driving dynamics and efficiency. It does the sprint from zero to 100 km/h in 5.6 seconds – more than one second less than the predecessor model. The top speed when driving on electric power alone is increased from 120 to 140 km/h. Its electrically powered range is now approximately 80 kilometres*, almost three times that of its predecessor. The combined fuel consumption of the new BMW X5 xDrive45e iPerformance drops to 2.1 litres per 100 kilometres*, while the relevant CO2 emissions figure is now 49 grams per kilometre*.

These improved levels are the result of a completely newly developed drive technology. It comprises a 3.0-litre and 210 kW/286 hp in-line 6-cylinder engine from the current BMW EfficientDynamics drive family and the latest generation of BMW eDrive technology. An electrical system output of 82 kW/112 hp, a lithium-ion battery with extended storage capacity and further developed power electronics for intelligent energy management give the plug-in hybrid system of the BMW X5 xDrive45e iPerformance unique performance characteristics as well as an impressive level of efficiency. Together, the two drive units generate a system output of 290 kW/394 hp along with a maximum system torque of 600 Nm. The combustion engine and electric motor deliver their power to an 8-speed Steptronic transmission of the latest generation and the intelligent all-wheel drive system BMW xDrive. In this way, the drive torque is transferred to all four wheels when driving on electric power alone as well as when using the combustion engine or indeed both drive units: this ensures sporty driving pleasure on the road and supreme off-road performance over loose terrain at all times. The top speed of the BMW X5 xDrive45e iPerformance is 235 km/h.

Thanks to the high-voltage battery positioned in the underbody area of the vehicle, the centre of gravity is lower than in conventionally powered SAV model variants. The luggage compartment volume of the BMW X5 xDrive45e iPerformance is only some 150 litres less. When all seats are used, the storage volume is 500 litres; if the rear backrests are folded down, a volume of 1 716 litres is available. The volume of the fuel tank is 69 litres – suitable for long distances.

The new BMW X5 xDrive45e iPerformance is fitted as standard with a two-axle air suspension and electronically controlled dampers. The optional suspension systems available for the plug-in hybrid model include integral active steering. In addition to a comprehensive selection of features in the area of intelligent connectivity, new digital services are also offered that are geared specifically towards electromobility. In addition, all driver assistance systems developed for the Sports Activity Vehicle as well as high-quality options to enhance comfort and luxurious interior ambience are also available for the new BMW X5 xDrive45e iPerformance.

The values for fuel consumption, CO2 emission and energy consumption shown were determined in the standardized test cycle according to the European Regulation (EC) 715/2007 in the version applicable at the time of type approval. The figures refer to a vehicle with basic configuration in Germany and the range shown considers optional equipment and the different size of wheels and tires available on the selected model and may vary during the configuration.

The values are already based on the test cycle according to the new WLTP regulation and are translated back into NEDC-equivalent values in order to allow a comparison between vehicles. With respect to these vehicles, for vehicle related taxes or other duties based (at least inter alia) on CO2-emissions the CO2 values may differ to the values stated here.