BMW M GmbH is expanding its high-performance model line-up to include models in the mid-size Sports Activity Vehicle (SAV) and Sports Activity Coupe (SAC) segments for the first time. The BMW X3 M and BMW X4 M set the benchmark for dynamic excellence, agility and precision in their respective classes. 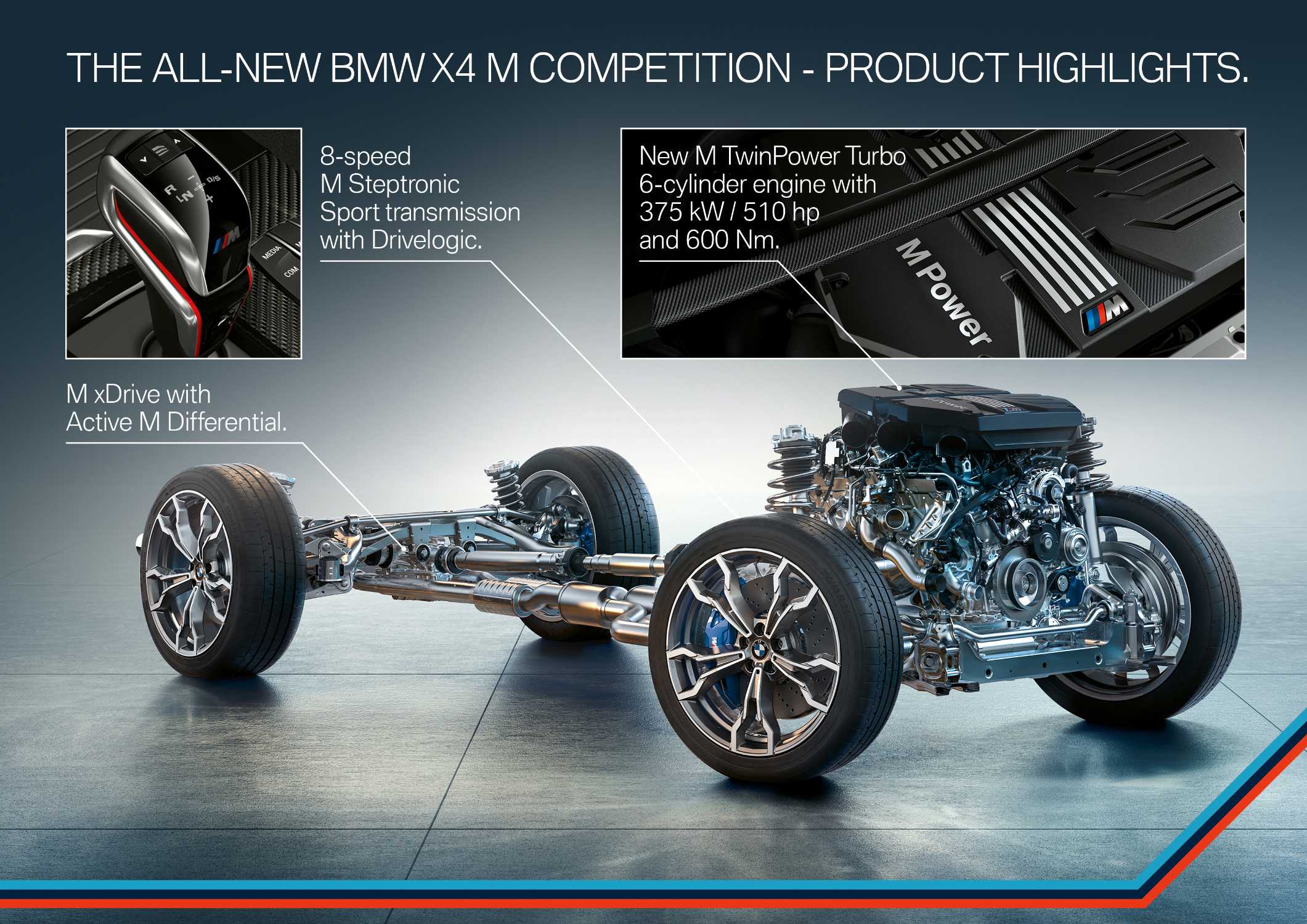 The most powerful straight-six petrol engine ever to see action in a BMW M car provides the muscle for stunning performance attributes. The newly developed high-revving unit with M TwinPower Turbo technology generates maximum output of 353 kW/480 hp from its 3.0-litre displacement, together with peak torque von 600 Nm (442 lb-ft). The version of the bi-turbo unit developed specially for the BMW X3 M Competition and BMW X4 M Competition raises the output figure by 22 kW/30 hp to 375 kW/510 hp.

The new high-performance engine teams up with an eight-speed M Steptronic transmission with Drivelogic and uses the new M xDrive all-wheel-drive system, which made its debut in the BMW M5, to channel its power to the road. The M xDrive system has a rear-wheel bias and offers BMW X3 M and BMW X4 M owners two AWD driving modes. The centrally controlled interaction between M xDrive and the Active M Differential at the rear axle allows the all-wheel-drive system to split the engine’s power between the four wheels as required to deliver optimal traction, agility and directional stability. The BMW X3 M and BMW X4 M both sprint from 0 to 100 km/h (62 mph) in 4.2 seconds, while their Competition variants hit 100 km/h (62 mph) from rest in just 4.1 seconds. 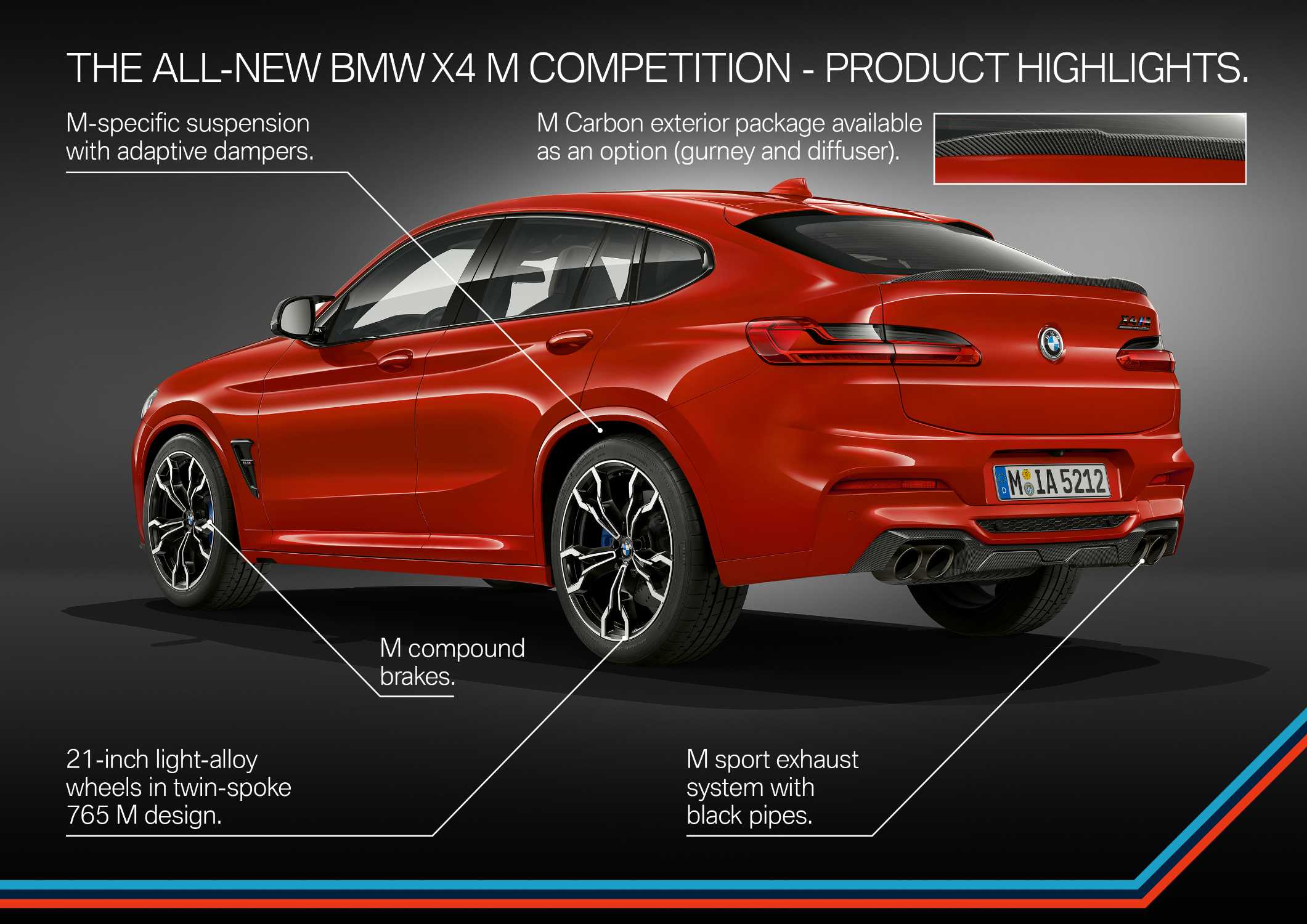 The combination of dynamism and precision for which BMW M cars are renowned is underpinned by model-specific body strengthening elements and sophisticated chassis technology tuned astutely to marshal the engine’s power. With three settings selectable at the touch of a button, the M-specific suspension’s electronically controlled dampers enable both excellent everyday comfort and extremely direct contact with the road, with low wheel and body movements. The bespoke kinematics and elastokinematics of the M-specific suspension – with its double-joint spring strut front axle and five-link rear axle – deliver precise wheel location and directional stability. Composed to also deliver precisely controllable on-limit handling, the chassis technology package rounds off with M-specific steering (including M Servotronic and variable ratio) and powerful M compound brakes. Among the other items on the standard specification list are 20-inch M light-alloy wheels.

Like the damper control systems and M xDrive modes, the engine and transmission characteristics and steering set-up can be adjusted at the touch of a button. The DSC (Dynamic Stability Control) system allows controlled wheel slip in M Dynamic Mode and, needless to say, can also be switched off. Plus, the content shown in the optional Head-Up Display can be specified via the iDrive menu. The driver can store two overall set-up options – configured as desired from the above parameters – in the iDrive menu and select them as and when required using the two M buttons on the steering wheel. 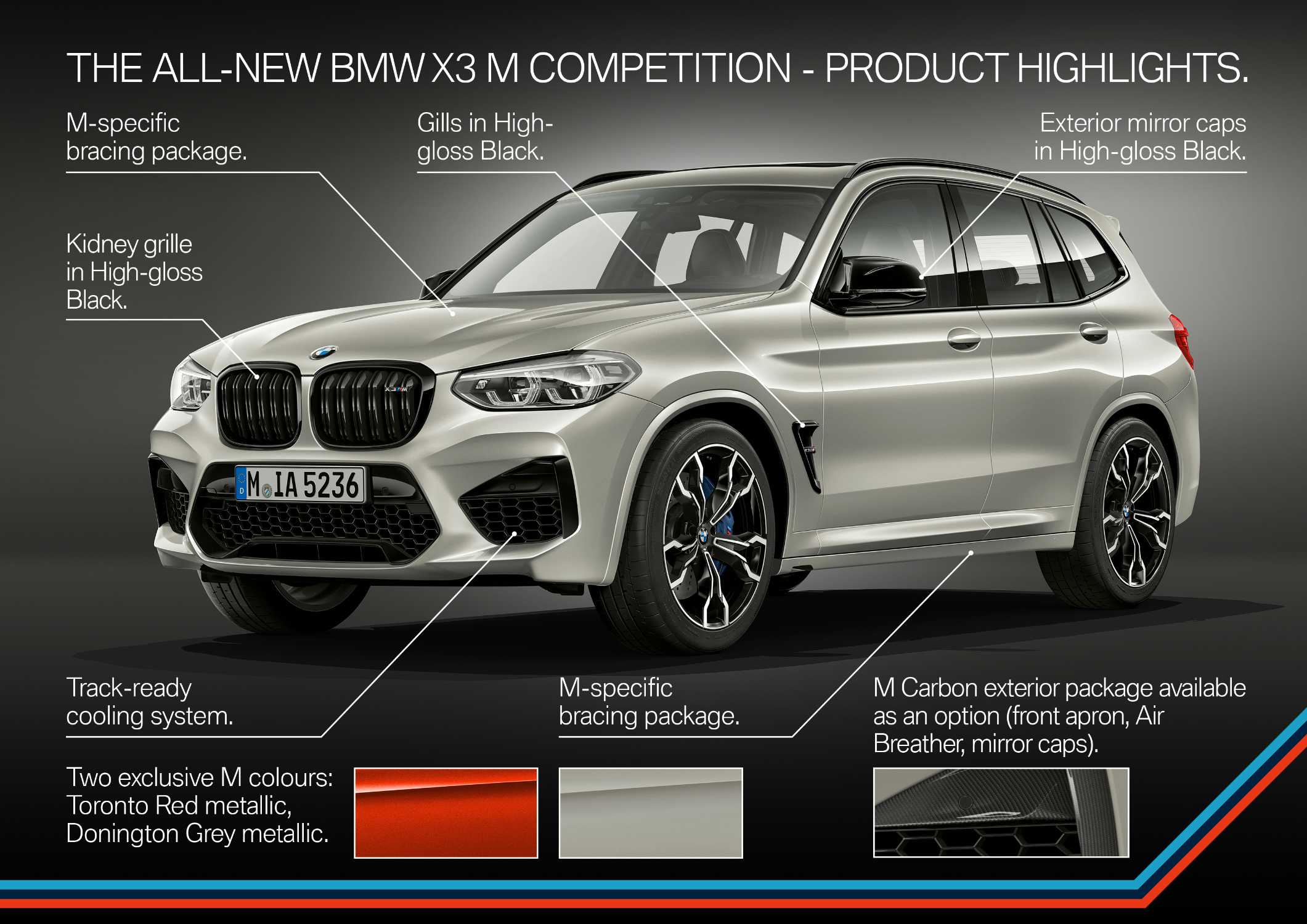 Signature M design elements for the exterior and interior.

The BMW X3 M Competition and BMW X4 M Competition bring further exclusive accents to the exterior, in the form of High-gloss Black for the BMW kidney grille surround, exterior mirror caps and M gills, and the rear spoiler of the Sports Activity Coupe. Their standard equipment also includes 21-inch M light-alloy wheels in polished Black and an M Sport exhaust system. The expressive aura of the interior, meanwhile, is enhanced by M Sport seats with extended Merino leather upholstery, model-specific door sill plates and a model nameplate on the centre console. Options for the Competition models include special bi-colour leather upholstery variants with Alcantara applications.

The optional M Carbon exterior package (expected to be available from end of 2019), which features design elements in carbon fibre-reinforced plastic (CFRP) for the front air intakes, the air blades in the front apron, the rear diffuser and the exterior mirror caps, adds further individual flourishes. On the BMW X4 M and BMW X4 M Competition, these elements are joined by a CFRP rear spoiler. 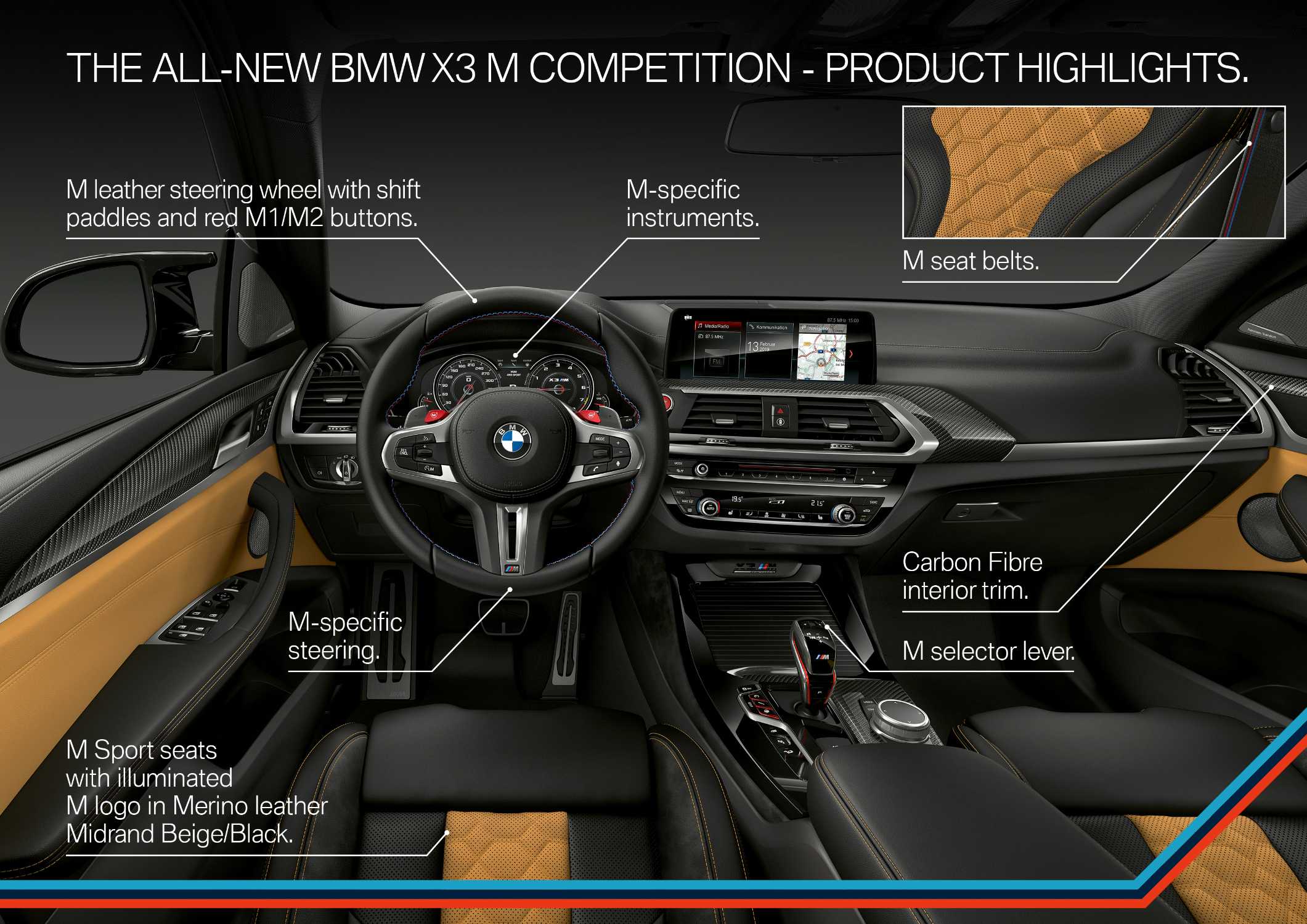 Among the items fitted as standard in the BMW X3 M, BMW X4 M and Competition models are LED headlights, the hi-fi speaker system and the ConnectedDrive navigation package including the Navigation system Professional. The options list for the BMW X3 and BMW X4 provides further scope for individualisation and includes cutting-edge driver assistance systems and the digital services from BMW Connected and BMW ConnectedDrive.