Munich. The choice of model variants of the new MINI Countryman is to be extended as of July 2017 with the addition of two new entry-level versions featuring a petrol and diesel engine respectively. Parallel to the premiere of the new MINI One Countryman (fuel consumption: 5,8 - 5,5 l/100 km; CO2 emissions: 133 - 126 g/km) and the new MINI One D Countryman (fuel consumption: 4,3 - 4,1 l/100 km; CO2 emissions: 114 - 109 g/km), the British premium brand is enhancing the appeal of its models in the small car and compact segment as of summer 2017 with a range of new features in the areas of design, functionality and infotainment.

The modifications apply to the display and operating concept as well as to the range of optional equipment. All current MINI models will feature a further developed cockpit instrument with a new night design and a fuel level display that offers greater precision. Operation of the MINI Driving Modes and MINI Head-Up-Display will be adapted, too. As of July 2017 it will be possible to have the MINI Clubman and MINI Countryman fitted with an Apple CarPlay preparation, while the alertness assistant will also be available for the MINI 3 door, MINI 5 door and MINI Convertible in future. Another new feature available for the MINI Convertible is the Always Open Package.

MINI Countryman: all-round talent with new entry-level variants.
The engine portfolio for the MINI Countryman sees an expansion from July 2017 onwards with the addition of another petrol engine and diesel engine. With the new model variants, the biggest and most versatile MINI underscores its qualities in the area of economic efficiency in particular. Both the new engines draw their power from a capacity of 1.5 litres spread over three cylinders. They belong to the latest engine generation of the BMW Group characterised by weight-optimised design, cutting-edge MINI TwinPower Turbo Technology and a particularly high level of internal efficiency.

The petrol engine in the new MINI One Countryman combines turbocharging and petrol direct injection with variable camshaft control (double VANOS). Its turbine casing is integrated in the water-cooled exhaust manifold, so it is positioned close to the combustion chambers. A counterbalance shaft in forged steel optimises the vibration response and therefore the running smoothness of the 3-cylinder engine. With a peak output of 75 kW/102 hp and a maximum torque of 180 Newton metres between 1 250 and 3 800 rpm, the engine of the new MINI One Countryman provides sporty, agile driving fun. With the standard 6-speed manual transmission it accelerates in 11.8 seconds from zero to 100 km/h, completing the same sprint in 12.2 seconds with the 6-speed Steptronic transmission. The top speed is 180 km/h in each case. Both with manual and Steptronic transmission the average fuel consumption of the new MINI One Countryman is 5.8 to 5.5 litres per 100 kilometres. Its level of CO2 emissions is 133 to 126 grams per kilometre (NEDC test cycle figures, dependent on tyre format selected).

A turbocharger with variable intake geometry and common rail direct injection with magnet valve injectors that generate a maximum pressure of 2 000 bar ensure the engine of the new MINI One D Countryman offers sporty pulling power combined with favourable fuel consumption figures. The running smoothness of the 3-cylinder diesel engine is also optimised by means of a counterbalance shaft. Its peak output is 85 kW/116 hp, while the maximum torque of 270 Newton metres goes on stream between 1 750 and 2 250 rpm. The new MINI One D Countryman sprints in 10.9 seconds from standing to 100 km/h, achieves a top speed of 190 km/h and has an average fuel consumption of 4.3 to 4.1 litres per 100 kilometres. Its level of CO2 emissions is 114 to 109 grams per kilometre (NEDC test cycle figures, dependent on tyre format selected).

Apple CarPlay preparation for MINI Clubman and MINI Countryman.
Available optionally and in conjunction with the equipment package Wired for the new MINI Countryman and the new MINI Clubman, the Apple CarPlay preparation provides a range of new possibilities in terms of intelligent connectivity and infotainment facilities. It enables convenient, wireless integration of the Apple iPhone for the use of numerous functions in the areas of music and communication as well as enabling other apps to be controlled via the operating system of the two MINI models.

New cockpit displays: night design in white, fuel level display offering greater precision.
As of July 2017, the cockpit instrument on the steering column of all current MINI models with offer optimised readability and an enhanced graphic display. In the night design, the numbers and letters will appear in white rather than orange in future. This new colour scheme will also apply to the Head-Up-Display in the dark. The individual height setting for the Head-Up Display will in future be stored in the personal profile on the vehicle key, as will the settings for the exterior mirrors and the electrically adjustable seats.

The new fuel level display in the right-hand section of the cockpit instrument features a qualitatively enhanced appearance and more precise display. This makes it easier to read off fuel level details.

New operation for MINI Driving Modes and MINI Head-Up-Display.
Operation of the optional MINI Driving Modes for individual vehicle set-up will be modified in all current MINI models as of July 2017. The change from the standard setting to SPORT mode or GREEN Mode and will be triggered by means of a toggle switch designed in typical MINI style and positioned underneath the control unit for the air conditioning. A separate menu item will be provided in the MINI operating system from July 2017 onwards for activation of the optional MINI Head-Up Display.

New optional equipment items: alertness assistant and Always Open package.
The alertness assistant will be available for the MINI 3 door, MINI 5 door and MINI Convertible as of July 2017, ensuring additional safety on lengthier trips in these models. This system forms part of the Radio MINI Visual Boost or navigation system and continuously analyses the driving style. If the distance covered or the driver’s behaviour indicates that the driver may be losing concentration, the system encourages the driver to take a break – in typical MINI style with a graphic on the screen in the central instrument and the suggestion “Tea Time”.

Open-top driving fun in the MINI Convertible can be further enhanced with the Always Open Package – just in time for the start of the summer in 2017. This includes Comfort Access, heatable seats for driver and front passenger, a wind deflector that reduces air swirl during open-top driving and the Always Open Timer, which records and displays the time spent driving with the roof open. 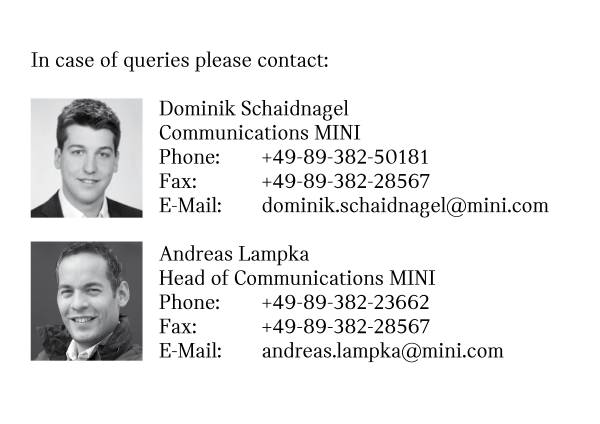