The BMW 7 Series has landed a major Hollywood role alongside Oscar-winner Jennifer Lawrence in Red Sparrow, the new spy thriller from 20th Century Fox Film, which will open in cinemas on 2 March.

Munich. The BMW 7 Series has landed a major Hollywood role alongside Oscar-winner Jennifer Lawrence in Red Sparrow, the new spy thriller from 20th Century Fox Film, which will open in cinemas on 2 March.

Jennifer Lawrence plays Dominika Egorova, a prima ballerina with Russia’s world-renowned Bolshoi Ballet. When she suffers a career-ending injury, Dominika and her mother are facing a bleak and uncertain future. That is why she finds herself manipulated into becoming the newest recruit for Sparrow School, a secret intelligence service that trains exceptional young people like her to use their bodies and minds as weapons. After the training process, she emerges as the most dangerous Sparrow the program has ever produced. Dominika must now reconcile the person she was with the power she now commands, with her own life and everyone she cares about at risk, including an American CIA agent (Joel Edgerton) who tries to convince her he is the only person she can trust.

The cast also includes British actor and Oscar-winner Jeremy Irons as a two-faced Russian general; Oscar-nominated actress Charlotte Rampling as chief instructor of the Sparrow School; Matthias Schoenaert as head of the Russian Secret Service and Mary-Louise Parker as a U.S. informant.

The BMW 7 Series accompanies Dominika on her journey from elegant and graceful prima ballerina to self-assured secret agent. The luxury sedan reappears at key moments in the plot, including the scene where Dominika is driven to the secret Sparrow School for the first time. The drive through the snow-covered Russian landscape, assisted by the BMW xDrive intelligent all-wheel-drive system, symbolises the transition from Dominikas’s past to her mysterious, but exciting future.

“We were excited about this suspenseful adaptation of the bestselling novel Red Sparrow from the beginning. Jennifer Lawrence as Dominika embodies an elegant and strong agent. The BMW 7 Series and its positioning suit her character perfectly,” said Uwe Dreher, head of Brand Communications BMW. 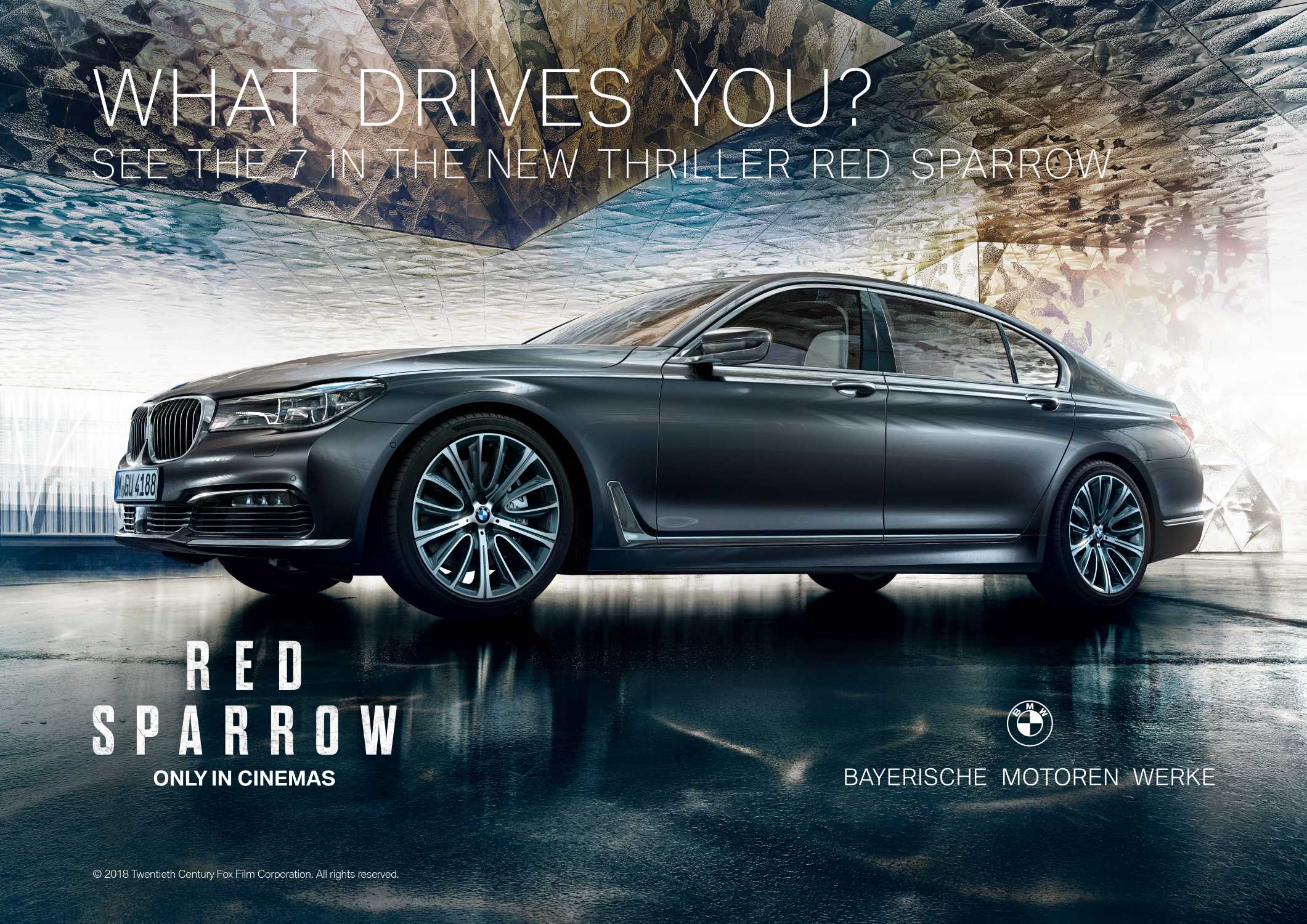 “We have been working with BMW to find the best project that could fit the BMW 7 Series,” said Zachary Eller, Executive Vice President, Marketing Partnerships, 20th Century Fox Film.  “When this opportunity came around, we were thrilled with the natural fit of story and car and the ability to complement our campaign with BMW’s marketing.”

The BMW 7 Series Sedan has made numerous appearances in the glamorous world of secret agents and spy thrillers. Who could forget the legendary performance of the BMW 750iL in the James Bond film Tomorrow Never Dies, which caused a sensation back in 1997, with a range of new technology like a remote control via touchpad phone. In general, BMW vehicles have a long been featured on the big screen, including in iconic films like Mission: Impossible and the James Bond franchises. BMW is also a long-standing partner of the Directors’ Guild of America, whose annual DGA awards are highly respected in Hollywood and across the film industry.

As part of the cooperation with 20th Century Fox Film, BMW will be promoting Red Sparrow widely through its own digital channels and print campaign.

The film was shot on location in London, Budapest and Vienna between January and April 2017 and was directed by Francis Lawrence. Red Sparrow will debut in cinemas on 2 March.

With its four brands BMW, MINI, Rolls-Royce and BMW Motorrad, the BMW Group is the world’s leading premium manufacturer of automobiles and motorcycles and also provides premium financial and mobility services. The BMW Group production network comprises 31 production and assembly facilities in 14 countries; the company has a global sales network in more than 140 countries.