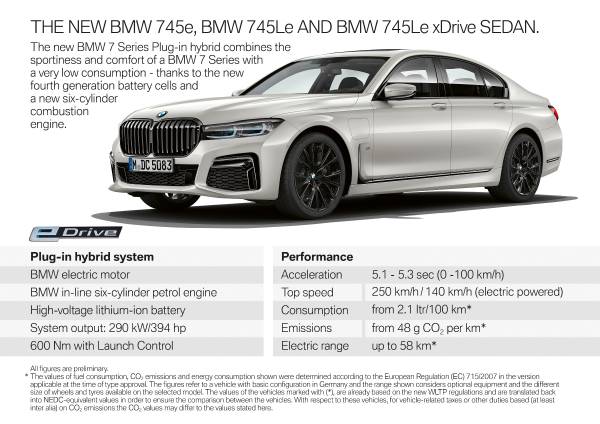 Munich. BMW presents a particularly contemporary and technologically advanced form of automotive luxury. The extensively advanced plug-in hybrid models of the luxury sedan likewise line up for the start at the market launch of the new BMW 7 Series in spring 2019. They combine the sporty flair, travel comfort and feel-good ambience of the brand’s top models with a particularly high level of efficiency as well as the possibility of enjoying a purely electrically powered, locally emissions-free and virtually noiseless driving experience. This future-oriented driver experience in the luxury performance segment is available in a choice of three model variants: the BMW 745e, the long version BMW 745Le and the BMW 745Le xDrive with extended wheelbase and intelligent all-wheel drive - only the long wheel base model (BMW 745Le xDrive) will be offered in South Africa from May/June 2019.

Their plug-in hybrid system now includes a 6-cylinder in-line petrol engine and a further advanced high-voltage battery with enlarged capacity. Progress vis-à-vis the predecessor models is reflected by a boost in output and torque as well as improved figures for electrically powered range, fuel consumption and CO2emissions.

With their new drive technology, the BMW 745e, the BMW 745Le and the BMW 745Le xDrive represent the typical character of the luxury sedan more than ever before. Their plug-in hybrid system now includes an in-line 6-cylinder petrol engine from the current BMW EfficientDynamics engine family that has been adapted on a model-specific basis to produce a peak output of 210 kW and offering unmistakable revving power and running smoothness, an electric motor with a rated output of 83 kW and a rated torque of 265 Nm, along with a new lithium-ion battery featuring the very latest battery cell technology and expanded storage capacity. The likewise further advanced power electronics features intelligent energy management for precisely controlled interaction between the two power units and – with activated preview function – efficient assignment of the electrical driving share to those route sections which are to be covered with zero emissions. There is an enhancement of dynamic performance generated by electrical boost and perceptible in a highly spontaneous engine response, as well as an increase in efficiency due to the electrical assist. When the driving experience switch is set to SPORT mode, an overall system output of 290 kW/394 hp is available. For a particularly powerful set-off manoeuvre, it is even possible to draw on a maximum system torque of 600 Nm.

As of the second quarter of 2019, new digital services will be available for the plug-in hybrid models of the BMW 7 Series which make charging the high-voltage battery en route even more attractive and convenient. When selecting a public charging station, the navigation system also provides the driver with a list of recommended nearby hotels, restaurants, cafés, tourist attractions and cultural institutions. In addition the customer is provided with a charging station occupancy forecast. BMW also enables ChargeNow customers to reserve a suitable charging station for a limited amount of time directly from their car.