Heritage drive: A blast through the past with the BMW 3 Series and other pop culture icons.

The BMW 3 Series may be an iconic driver’s car, but tracing its heritage offers a thrilling ride through time.

Singapore. From the birth of a Hollywood blockbuster, to the creation of a video sharing titan, to the arrival of Crazy Rich Asians on the world stage, the BMW 3 Series has emerged at some of the most captivating moments of human history over its seven generations of existence.

Here’s a drive through time with the BMW 3 Series as signposts along the way. 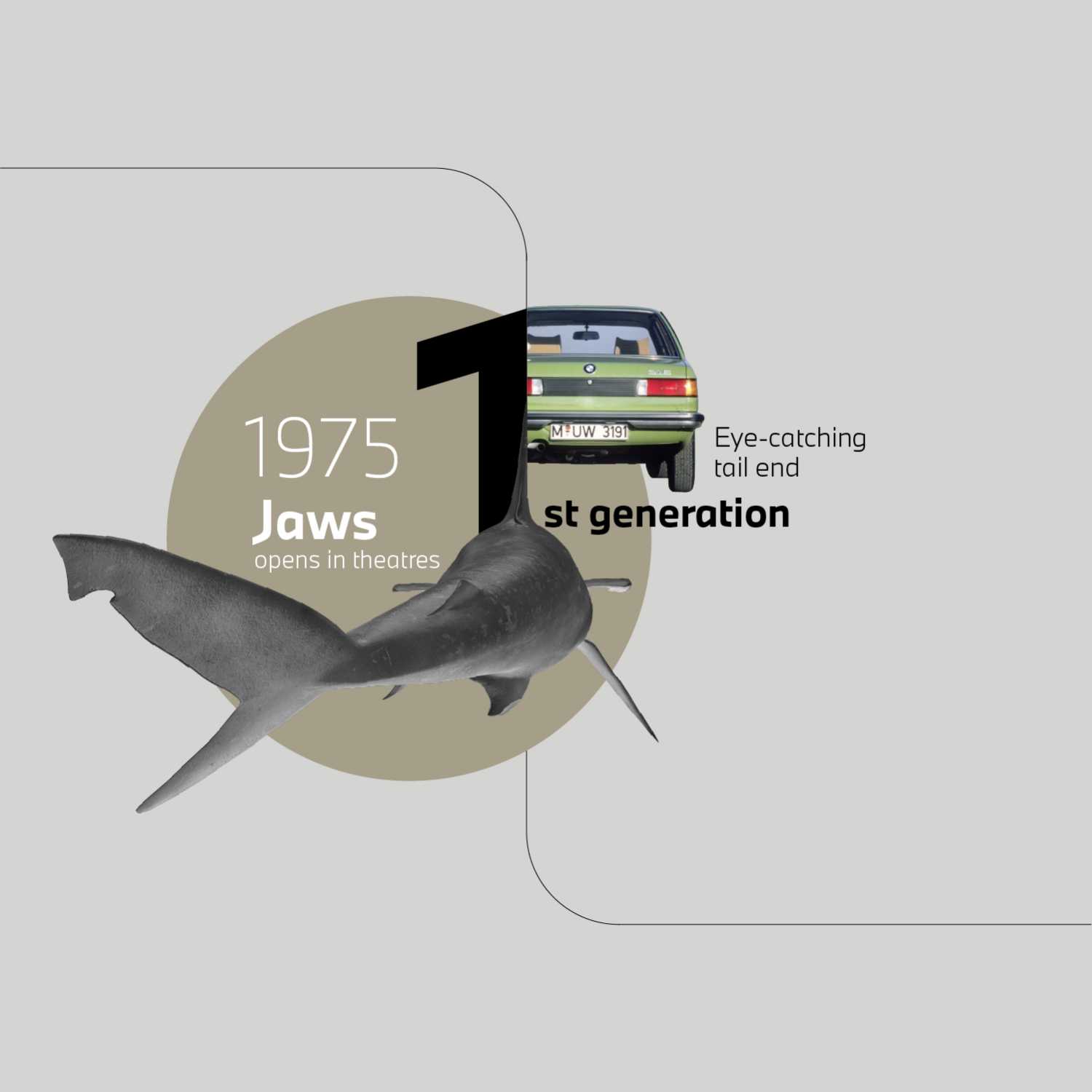 It’s 1975, and everyone has seen “Jaws”, Steven Spielberg’s US$9-million shark movie. While this US$472-million smash hit single-handedly lifted Hollywood out of a five-year recession, a different kind of phenomenon was about to create a stir in Munich, and all around the world.

That year, the BMW 3 Series, a two-door sedan with a shark-like nose and neat proportions, made its debut and immediately elevated the compact car into an art form. Created for demanding drivers, its powerful engines, flawless handling and far-reaching safety features also set a template for driving machines in the years to come. By 1981, sales would cross the one million mark, enough to make this new compact sedan the most successful model in the company’s history.

In 1976, readers of Europe’s biggest-selling motoring magazine voted the BMW 3 Series “the world’s best sedan” in its class, and in a 1980 survey, 80 percent of BMW 3 Series drivers said there was “nothing they could improve” about their car. By then, the designers were already hard at work on the next generation. 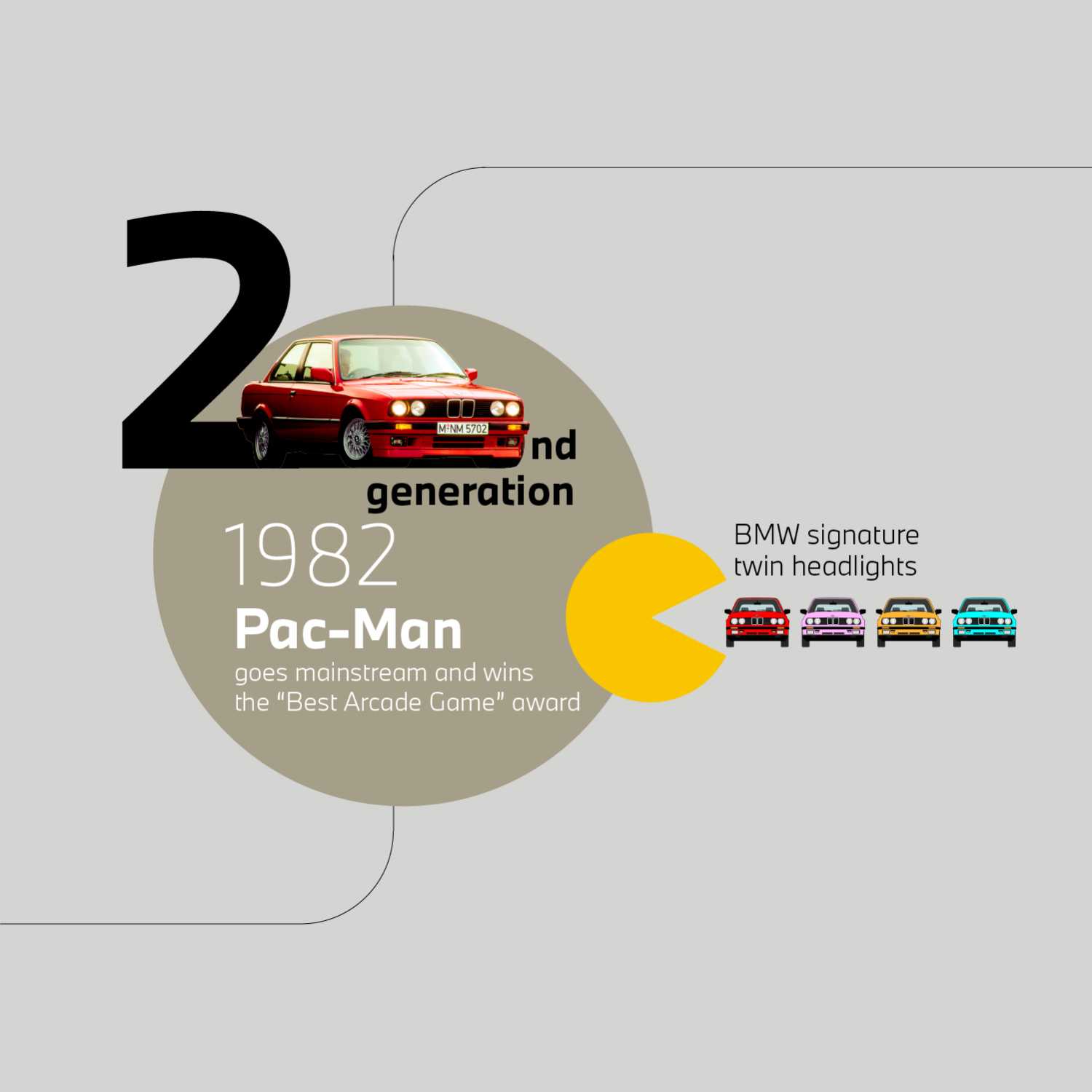 While a hungry fish with a taste for beachgoers captivated the masses, an insatiable video game character shaped like a hockey puck burst onto the scene seven years later to enthrall gamers. In 1982, Pac-Man took the world by storm, the same year the second generation of the BMW 3 Series succeeded the trendsetting original.

An iconic new design with smoother lines, more comfort, and extra power, the new BMW 3 Series was 3 cm shorter than before but had 4 cm more legroom inside. Every version now had four round headlamps, and in 1985, a sports derivative rolled into the spotlight: the BMW M3. With a chassis and engine both derived from the track, the sports sedan won race after race on its way to becoming the most successful car in the history of touring car racing.

Its high-profile success led to the creation of a special variant in the form of the M3 Convertible. Only 736 were constructed, and that rarity, along with the fact that the M3 Convertible was BMW M’s first open-top car, ensures that it remains a highly collectible piece of motoring history.

A four-door version of the BMW 3 Series followed the two-door, as well as a station wagon variant. The BMW 3 Series Touring entered production thanks to a ‘hobby’ project. Max Reisboeck, a BMW technician working on prototypes, built an elegant wagon in his garage out of an old BMW 3 Series sedan as he needed more space to take his family on vacation.

The variety of variants helped propel total sales to 2,339,251 cars, nearly a million more than the original. 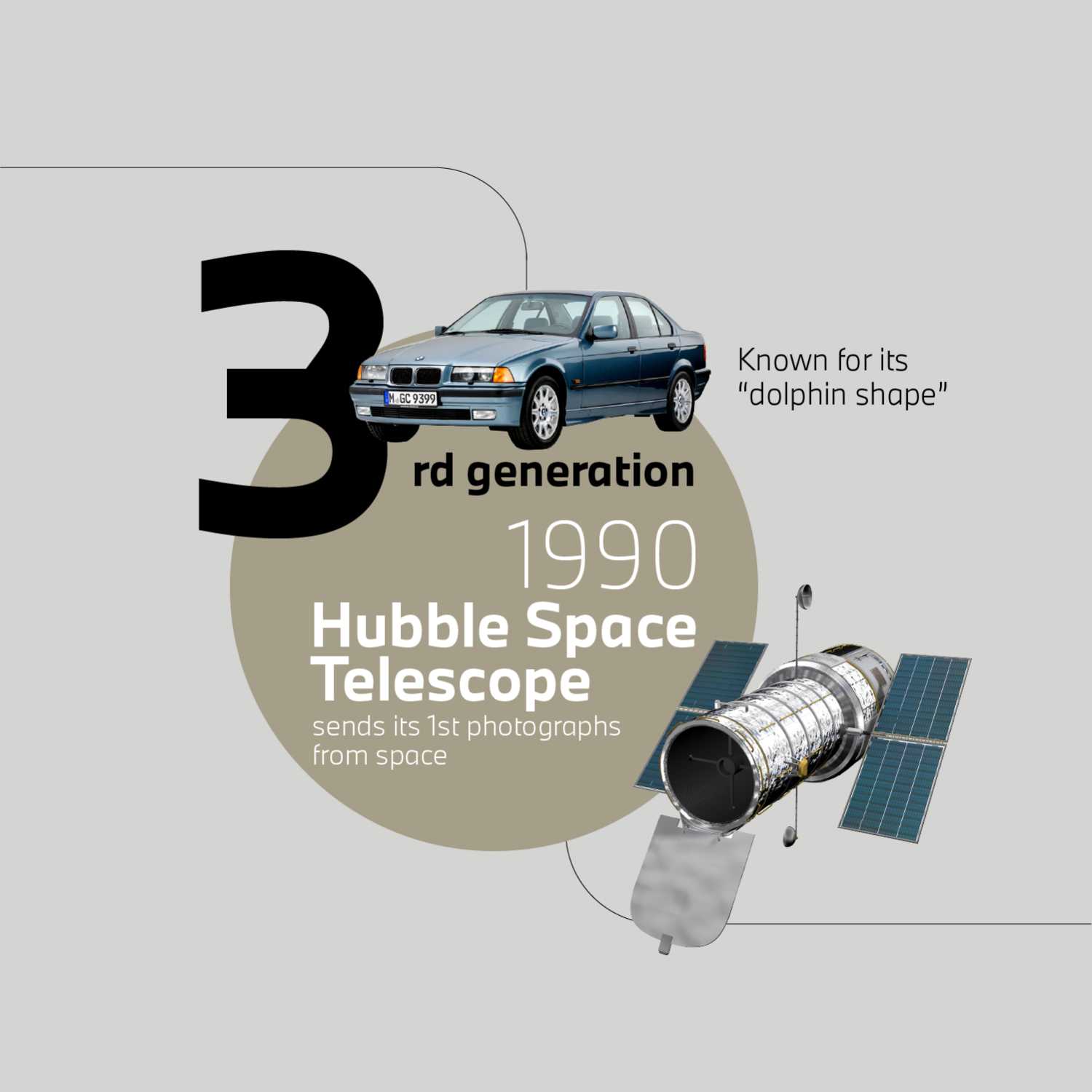 In 1990, the Hubble Space Telescope hurtled into orbit to peer into deep space, just as the world took its first look at the third generation BMW 3 Series. Available as a four-door from the outset, the new BMW 3 Series grew significantly to offer a larger and even more comfortable passenger compartment.

The two-door followed in 1992, and took the form of an elegant Coupe, riding 3cm closer to the road, with an 8cm-longer front end, lower bonnet, wider doors with frameless windows, and a shorter and lower boot lid. This provided the ideal base for the new M3, a milestone for BMW M that validated the idea of true sporting character blended with everyday practicality. Its six-cylinder engine delighted fans, not only by revving silkily and eagerly, but with its specific output: it produced 286 hp from only 3.0 litres, or nearly 96hp per litre; a high figure for a naturally-aspirated engine that few automakers could achieve at the time.

In 1993, the BMW 3 Series Convertible hit the road, and with a folding soft-top, it provided an opportunity to peer at the stars hanging in the night sky from the ground. 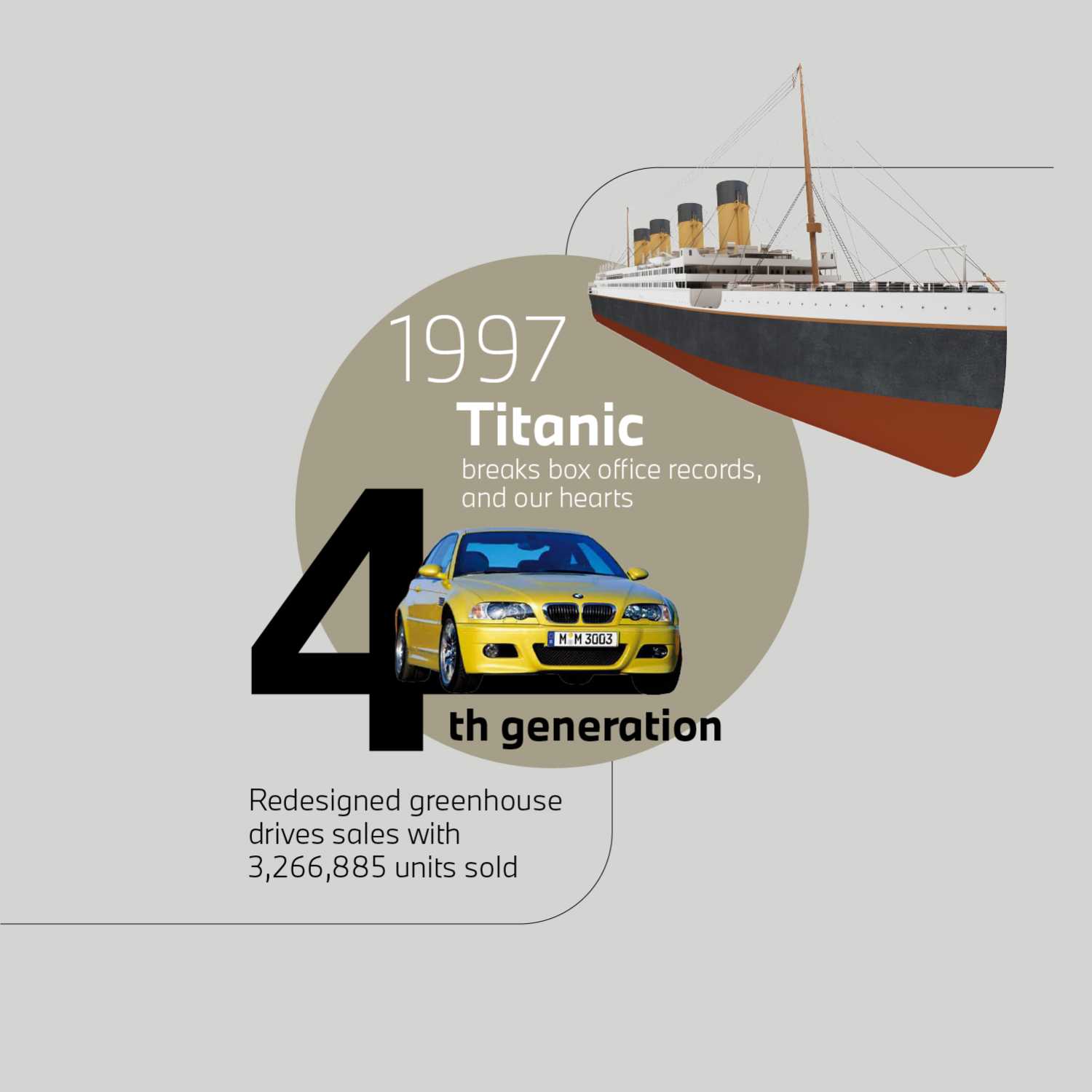 The “Titanic” was a meteoric hit in cinemas, and at the same time, the BMW 3 Series was also gaining popularity. Taking into account the sophisticated new four-door, Coupe, Convertible and Touring variants, its fourth incarnation eventually found 3,266,885 buyers; an all-time high for the BMW 3 Series.

The car had gained 4cm in length and width. The added size came with an interior made of high-quality materials, along with equipment previously unseen in the compact sedan segment, such as the multifunction steering wheel, rear side airbags, rain sensing wipers and satellite navigation. 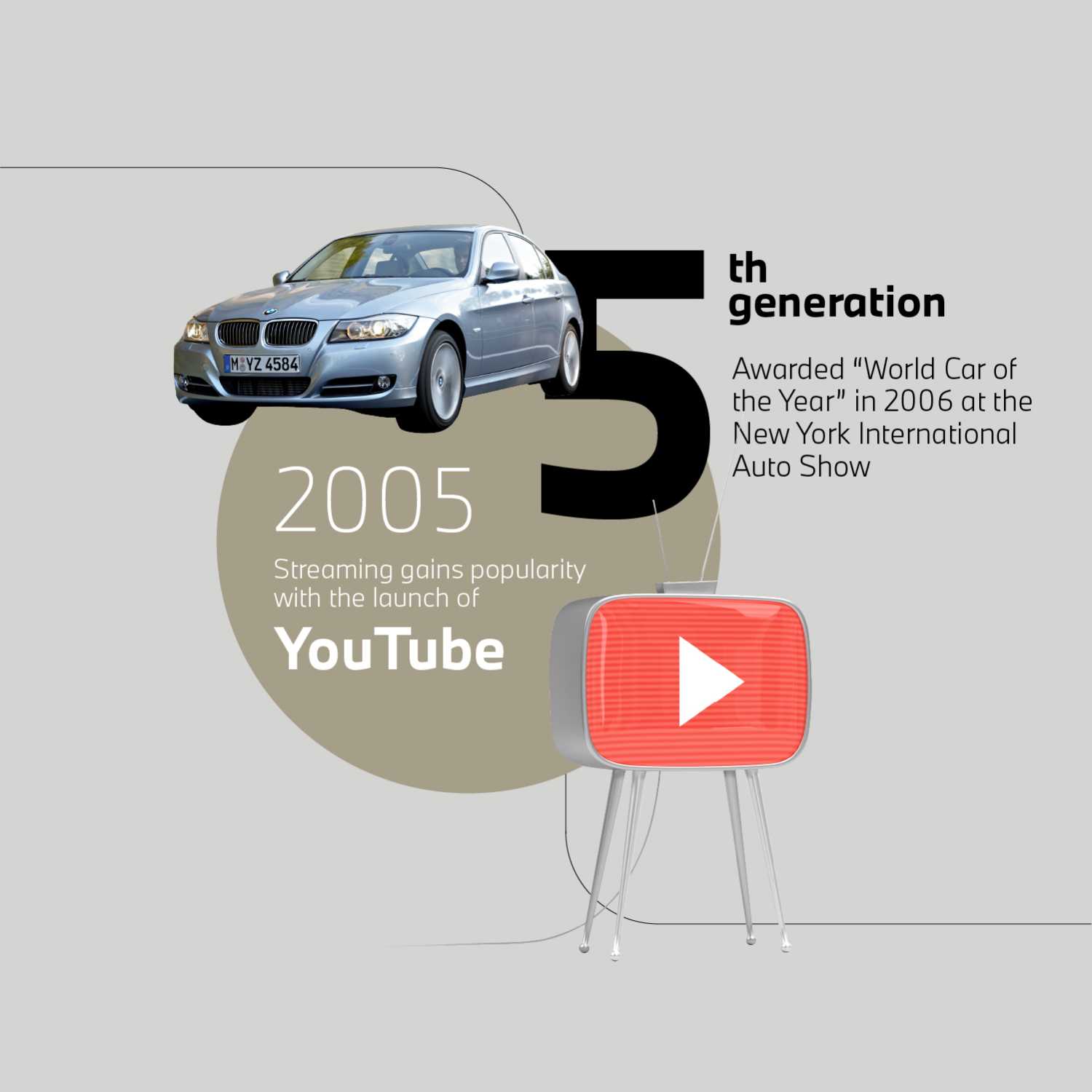 Show, a month after the founding of YouTube. Today, the video sharing site is the second-most popular on the Internet, behind its owner, Google.

Continuing along the path of sophistication, the new BMW 3 Series’ understated styling was the work of Joji Nagashima, a holder of more than 20 design patents. 46 international motoring journalists also named it the 2006 World Car Of The Year.

A Coupe derivative started in 2006 and was followed by the Convertible in 2007. That year, the BMW M3 debuted with a newly developed V8 engine. Aside from its high revving character and scintillating output of 420 horsepower, the new V8 would be the only one ever used in a BMW 3 Series, giving this generation of M3 a measure of true exclusivity. 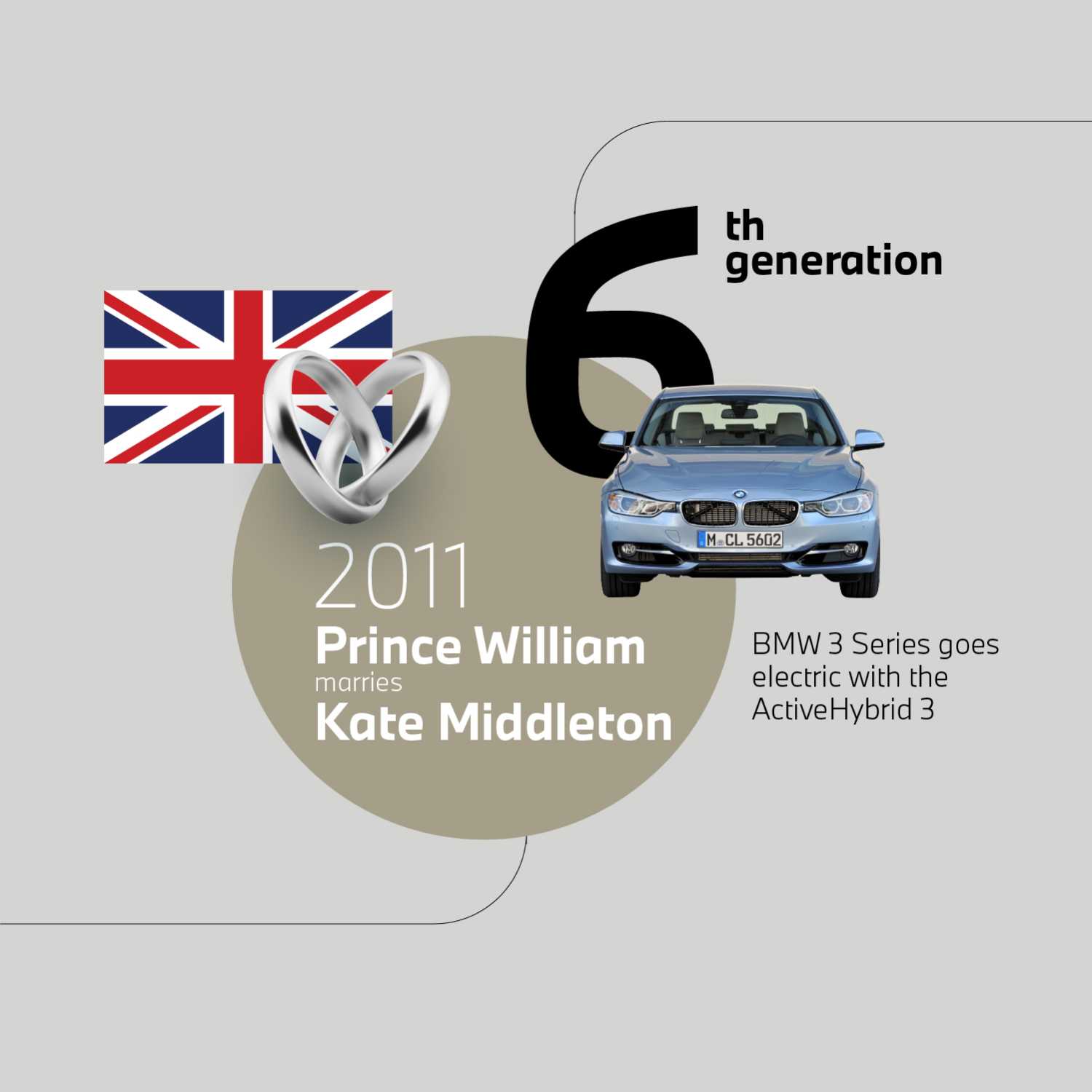 In April 2011, the nuptials between Prince William and Catherine Middleton drew enormous interest, with an estimated 234 million people tuning in to watch the wedding of the century. The sixth generation of the BMW 3 Series captivated its own fans with an emphasis on leading technology.

It offered an 8-speed Steptronic transmission for the first time in its class, and raised efficiency to new heights. The BMW 318i offered drivers a frugal three-cylinder engine, while the ActiveHybrid 3 combined a powerful six-cylinder engine with self-charging hybrid drive to minimise fuel consumption. In 2015, the BMW 330e took a best-of-both-worlds approach to sustainable mobility: the plug-in hybrid offered pure-electric drive for daily use in an urban setting, and combined it with a petrol engine for longer trips and maximum performance.

The Sedan and Touring variants were joined by the BMW 3 Series Gran Turismo, a practical new fastback. For the first time, the BMW 3 Series range would split into two, with the Coupe, Convertible and later, a new Gran Coupe derivative dubbed the BMW 4 Series. 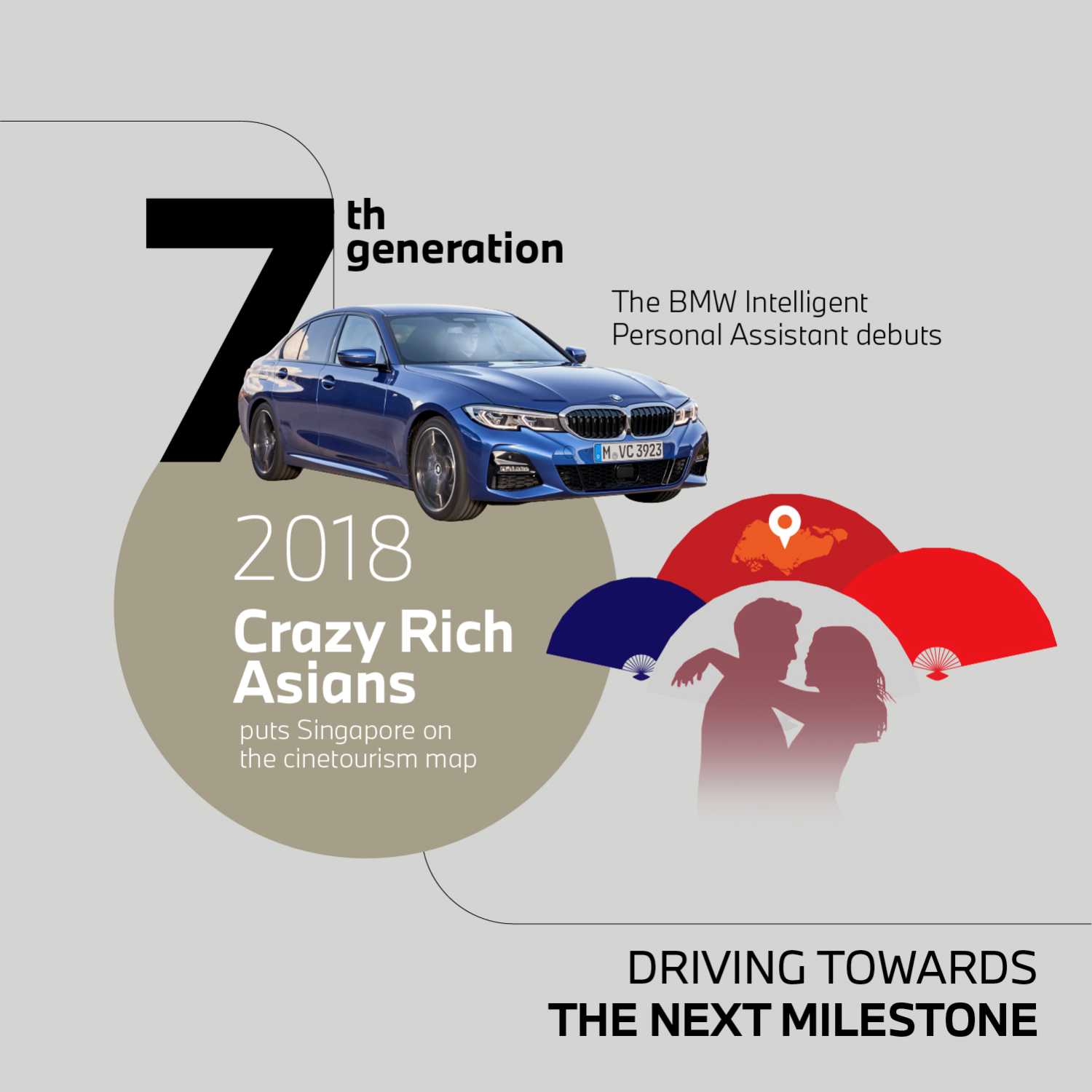 “Crazy Rich Asians” took in nearly US$235 million to become the highest grossing romantic comedy of the decade. It debuted in 2018, the same year the newest and current iteration of the BMW 3 Series appeared, combining the engaging character of the original with refinement and connectivity.

The latest BMW 3 Series is a handsome, dynamic and refined driver’s car. The cabin offers yet more room and high-quality materials, along with internet-enabled features such as the BMW Intelligent Personal Assistant. Providing a new means of interaction, this onboard digital butler could be woken up with the activation phrase “Hey, BMW”, after which it could interpret and respond to queries in natural language, such as, “Find me the nearest chicken rice stall.”

After more than four decades of growth and technological improvement, the BMW 3 Series sits at the pinnacle of innovation today. But its heritage shows that its ability to captivate has been there from the beginning.