Dynamic excellence, aesthetic appeal and intelligent functionality are attributes for which the BMW 5 Series Touring is well renowned. And the new-generation model takes this combination to a whole new level.

“The BMW 5 Series Touring was developed specifically for the European market, where it has enjoyed great success over the last 25 years. I am sure that the versatility of this new, fifth generation will prove even more popular with those customers who appreciate the 5 Series Touring’s characteristic roomy, variable loading space combined with its distinguished appearance and – of course – its BMW-typical driving dynamics,” says Dr Ian Robertson, Member of the Board of Management at BMW AG, Sales and Marketing.

The new BMW 5 Series Touring celebrates its world premiere in March 2017 at the Geneva International Motor Show. Four engines from the BMW Group’s latest generation of power units will be available to order when sales begin in June 2017, while the BMW xDrive intelligent all-wheel-drive system will be fitted in two models from day one. Additional variants with both classical rear-wheel drive and all-wheel drive will join the line-up over the course of the year.

The sporty driving characteristics of the new BMW 5 Series Touring are the product of new chassis technology and a commitment to reducing weight. Rear air suspension with automatic self-levelling is part of standard specification. Included on the options list, meanwhile, are Dynamic Damper Control, the Adaptive Drive system with active roll stabilisation, Integral Active Steering (now available in conjunction with xDrive) and M Sport suspension with a ten-millimetre drop in ride height.

The suspension side members and tailgate are now made from aluminium, which is also employed alongside high-strength steels in many other chassis components and the extremely torsionally-stiff body. This use of materials, together with the efficient drive-system technology already mentioned and optimised aerodynamics, results in fuel consumption and emissions 11 per cent lower than the figures recorded by the new 5 Series Touring’s predecessor. 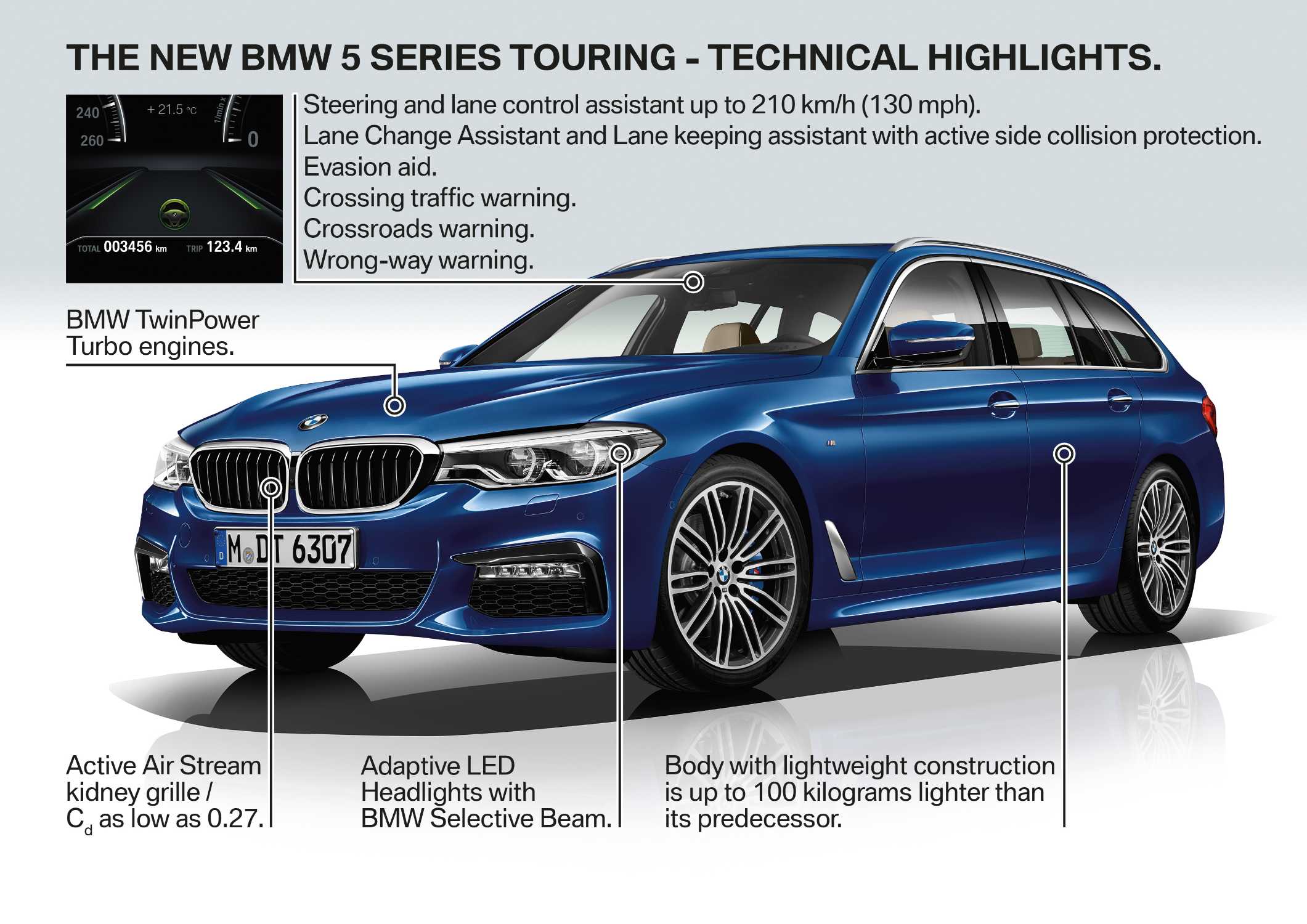 With surface contouring that creates a clearly defined athletic build and dynamically stretched lines, the exterior design of the new BMW 5 Series Touring clearly expresses the blend of sportiness and versatility for which this model is renowned. Precise contours mark out the front end of the new Touring, and the standard LED headlights extend up to the forward-surging BMW kidney grille. The flanks, meanwhile, combine the car’s distinctive geometry with harmonious proportions. Another contributor to the sporting aura exuded by the new BMW 5 Series Touring is its long roofline, flowing into heavily raked D-pillars. The rear window is framed by a roof spoiler with integrated auxiliary brake light and air deflectors at the sides. Lower down, a series of prominent horizontal lines and the L-shaped rear lights reaching deep into the car’s flanks accentuate the body’s width. 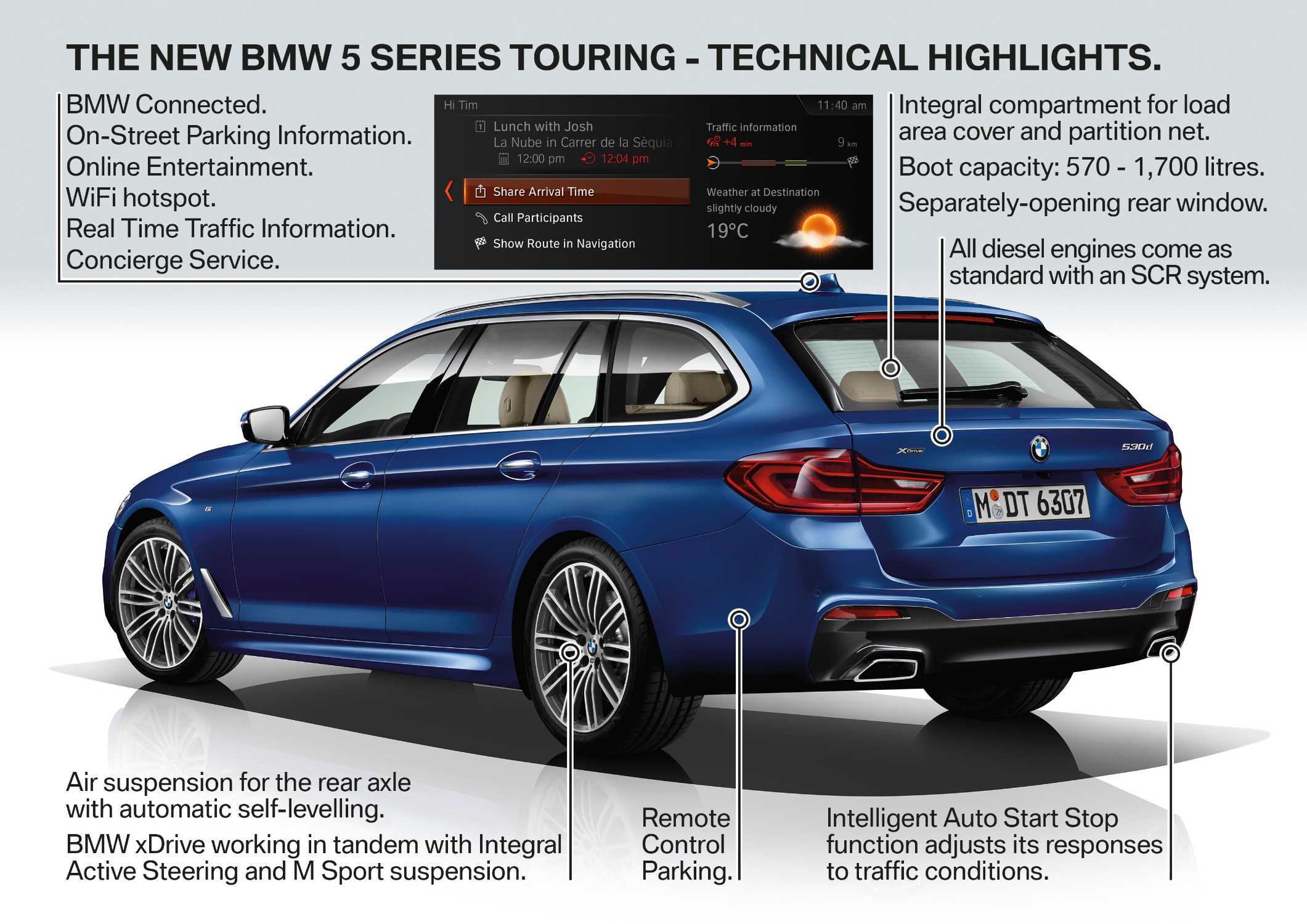 Inside the new BMW 5 Series Touring, a driver-focused cockpit design shares the stage with the premium ambience generated by a combination of contemporary elegance, precisely finished high-quality materials and a devotion to detail. The instrument panel rises up less prominently than in the outgoing 5 Series Touring, helping to create a generous feeling of space. The Control Display now comes in freestanding, flatscreen form. All seats benefit from appreciably greater head-, shoulder- and legroom, while optimised backrest contours, longer seat surfaces and extended kneeroom elevate comfort for the rear passengers. Further upgrades to the soundproofing provided by the windscreen, headliner and load compartment raise the acoustic comfort on board the new BMW 5 Series Touring to sedan levels. The increase in interior width allows up to three child seats to be fixed securely and comfortably across the rear.

The boot capacity of the new BMW 5 Series Touring has grown to
570 – 1,700 litres and its permissible load by up to 120 kilograms, depending on the model variant (to 720 – 730 kilograms). Similarly impressive is the high degree of functionality rooted in an array of practical details, such as the 40 : 20 : 40 split/folding rear seat backrest, electric remote backrest release (operated by pressing a button in the boot), separately-opening rear window and automatic tailgate operation – which, as an option, allows hands-free opening and closing. The load compartment cover and luggage partition net are now contained in separate cartridges that can be stowed away in matching recesses underneath the load compartment floor. 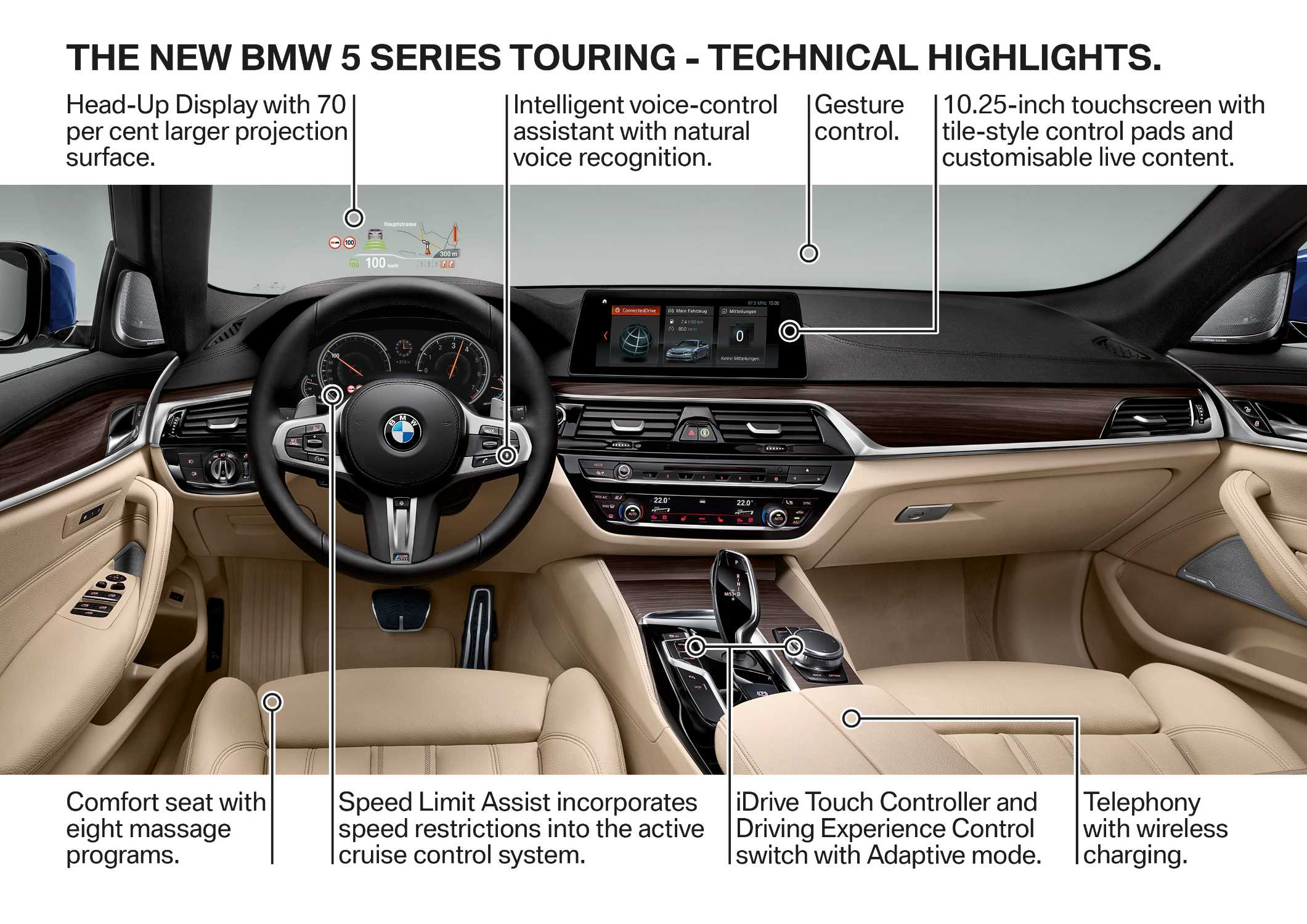 Driving pleasure, just as you like it: four engines and BMW xDrive available from launch.

The engines available to customers from the market launch of the new BMW 5 Series Touring boast BMW TwinPower Turbo technology and combine enhanced performance with reduced fuel consumption and emissions. The 2.0-litre four-cylinder petrol engine under the bonnet of the new BMW 530i Touring generates maximum output of 185 kW/252 hp and peak torque of 350 Nm (258 lb-ft). The BMW 530i Touring comes as standard with an eight-speed Steptronic transmission and sprints from 0 to 100 km/h (62 mph) in 6.5 seconds. Its combined fuel consumption stands at 6.3 – 5.8 litres per 100 kilometres (44.8 – 48.7 mpg imp)* and CO2 emissions are 143 – 133 grams per kilometre*.

The high-resolution, up to 10.25-inch Control Display used by the iDrive operating system comes in touchscreen form in the new BMW 5 Series Touring. As before, the vehicle, navigation, communication and infotainment functions can also be operated using the Touch Controller, should the driver prefer. The new tile-look menu display helps ensure intuitive usability and minimal distraction from what is happening on the road. Lending additional variety to the options available for operating the car’s functions are the further developed voice command technology and the gesture control system now also available in the BMW 5 Series. With its 70 per cent larger projection surface, the latest-generation BMW Head-Up Display represents another step forward for the car’s display and operating concept.

The new BMW 5 Series Touring is the latest model to point the way to automated driving with the help of new assistance systems and extended functionality. Contributing to the relentless progress in this area are Crossing traffic warning and Priority warning, Lane Change Assistant and Lane keeping assistant with active side collision protection, and the evasion aid. The new systems provide steering and lane control assistance from walking speed up to 210 km/h (130 mph), ensuring additional comfort and offering a helping hand in challenging driving situations. With the Active Cruise Control with Stop&Go function activated, the driver can now factor in speed restrictions detected by the Speed Limit Info system by simply pressing a button.

The new BMW 5 Series Touring also features BMW Connected, which provides a seamless bridge between the car and its driver’s smartphone. This technology assists drivers with their personal appointment and mobility planning – both on the road and at their home or workplace. For example, navigation destinations can be sent into the car from the user’s smartphone and the ideal departure time calculated using Real Time Traffic Information. Added to which, Remote 3D View allows users to access images of the area around their car on their smartphone. And users can manage their calendar, e-mail and contact details via Microsoft Exchange. Wireless smartphone integration also enables the use of Apple CarPlay and is complemented by an inductive charging facility.

* Figures according to EU test cycle, may vary depending on the tyre format specified.

All performance, fuel consumption and emissions figures are provisional.