Stage set for the Class 1 era: A detailed look at the new BMW M4 DTM for the most powerful DTM ever.

2019 welcomes the new Class 1 era in the DTM. BMW M Motorsport has built the most powerful DTM car ever: the BMW M4 DTM, has been modified in accordance with Class 1 regulations. At the heart of the car is the newly developed BMW P48 two-litre turbo engine. Combined with a significantly lighter car, the performance figures are nothing short of impressive and allow speeds of up to 300 km/h.

Munich. 2019 welcomes the new Class 1 era in the DTM. BMW M Motorsport has built the most powerful DTM car ever: the BMW M4 DTM, has been modified in accordance with Class 1 regulations. At the heart of the car is the newly developed BMW P48 two-litre turbo engine. Combined with a significantly lighter car, the performance figures are nothing short of impressive and allow speeds of up to 300 km/h. We give you an overview of the main differences between this season’s race car and the 2018 version.

The biggest innovation in the BMW M4 DTM is the engine. The four-litre V8 engine P66 has been replaced by a state-of-the-art, newly developed turbo engine – the P48. The capacity of this power unit is only half that of its V8 predecessor, yet it still generates far more power with less consumption. Like the BMW production engines, the P48 is a turbocharged, straight two-litre engine with direct fuel injection.

The DTM has introduced a push-to-pass function for the first time in 2019. At the touch of a button, the drivers can call on up to 30 PS of extra engine power. This is possible using an additional standard part, the fuel flow restrictor. The increase in power is achieved by temporarily allowing more fuel to be injected into the four cylinders of the P48 turbo engine. 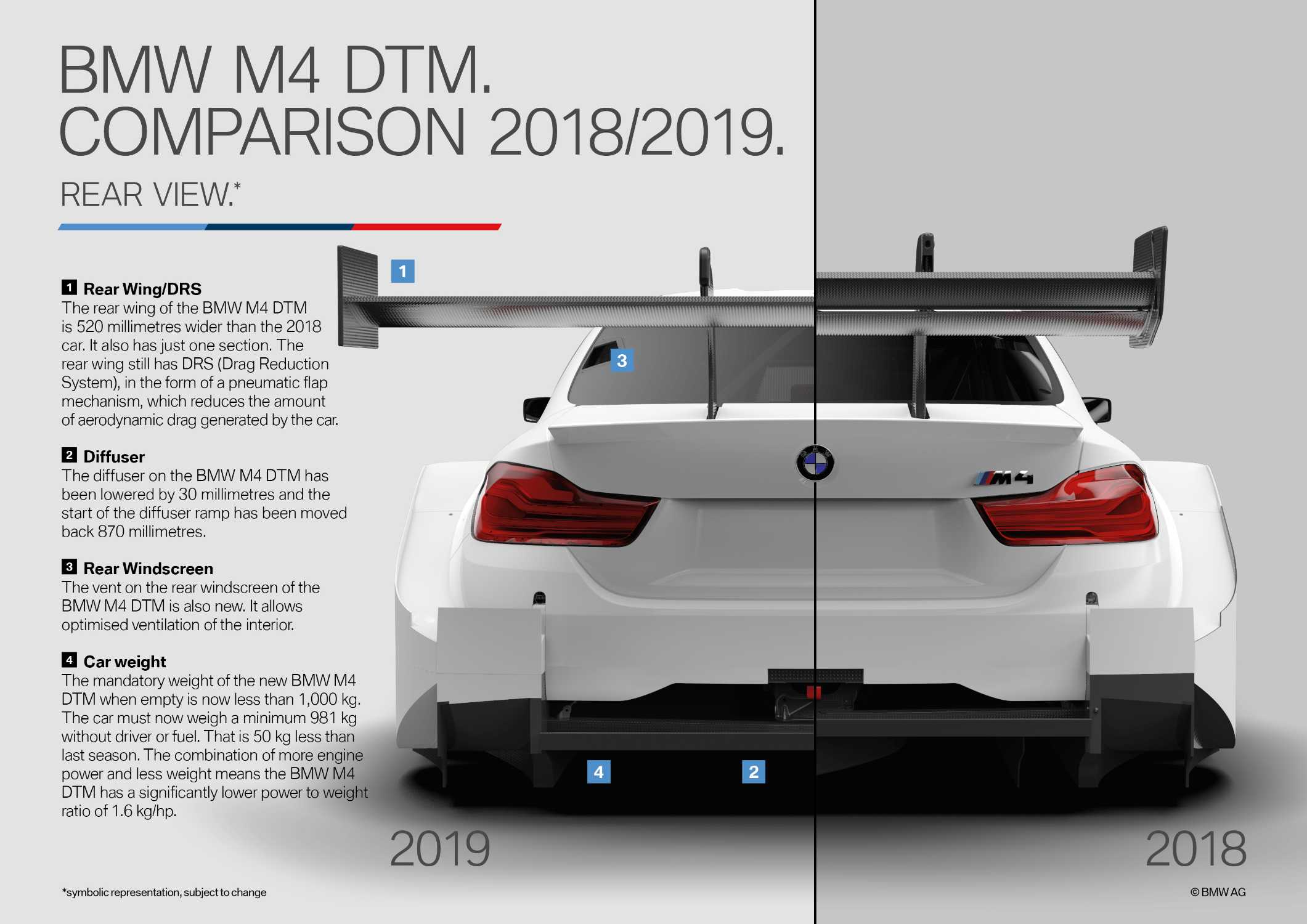 The rear wing of the BMW M4 DTM is 520 millimetres wider than that on the 2018 car. It also has just one section. The DTM adopted the concept of the standard part from the Japanese Super GT Championship. The rear wing still has DRS (Drag Reduction System), in the form of a pneumatic flap mechanism, which reduces the amount of aerodynamic drag generated by the car.

The mandatory weight of the new BMW M4 DTM when empty is now less than 1,000 kg. The car must now weigh a minimum 981 kg without driver or fuel. That is 50 kg less than last season. The combination of more engine power and less weight means the BMW M4 DTM has a significantly lower power to weight ratio of 1.6 kg/hp. This should ensure that the cars reach the 300 km/h mark on the fastest sections of track on the DTM calendar, such as the Parabolica at the Hockenheimring.

In accordance with Class 1 regulations, there will be no number plate on the BMW M4 DTM in 2019. This increases the size of the intakes for the cooling system. The opening of the characteristic BMW radiator grill has also been optimised.

The size of the cooling vents in the bonnet has been increased significantly for the intercooler of the two-litre turbo engine. 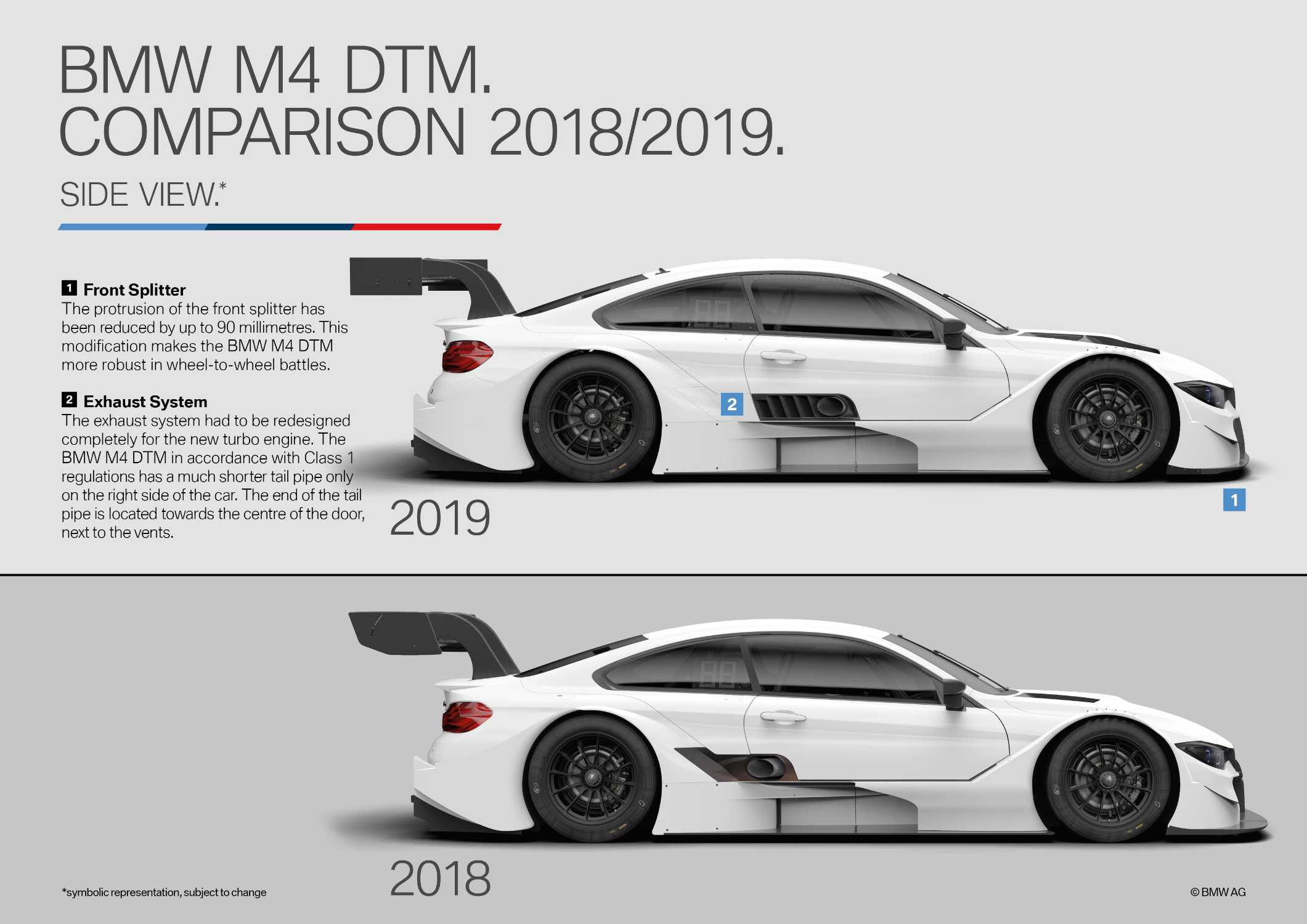 The protrusion of the front splitter has been reduced by up to 90 millimetres. This modification makes the BMW M4 DTM more robust in wheel-to-wheel battles.

The vent on the rear windscreen of the BMW M4 DTM is also new. It allows optimised ventilation of the interior. Other than that, the aerodynamics remain unchanged compared to 2018. With this combination of tried-and-tested and modified aerodynamic components, the focus shifts even more firmly towards the driver. At the same time, it avoids an aerodynamic arms race between the manufacturers. 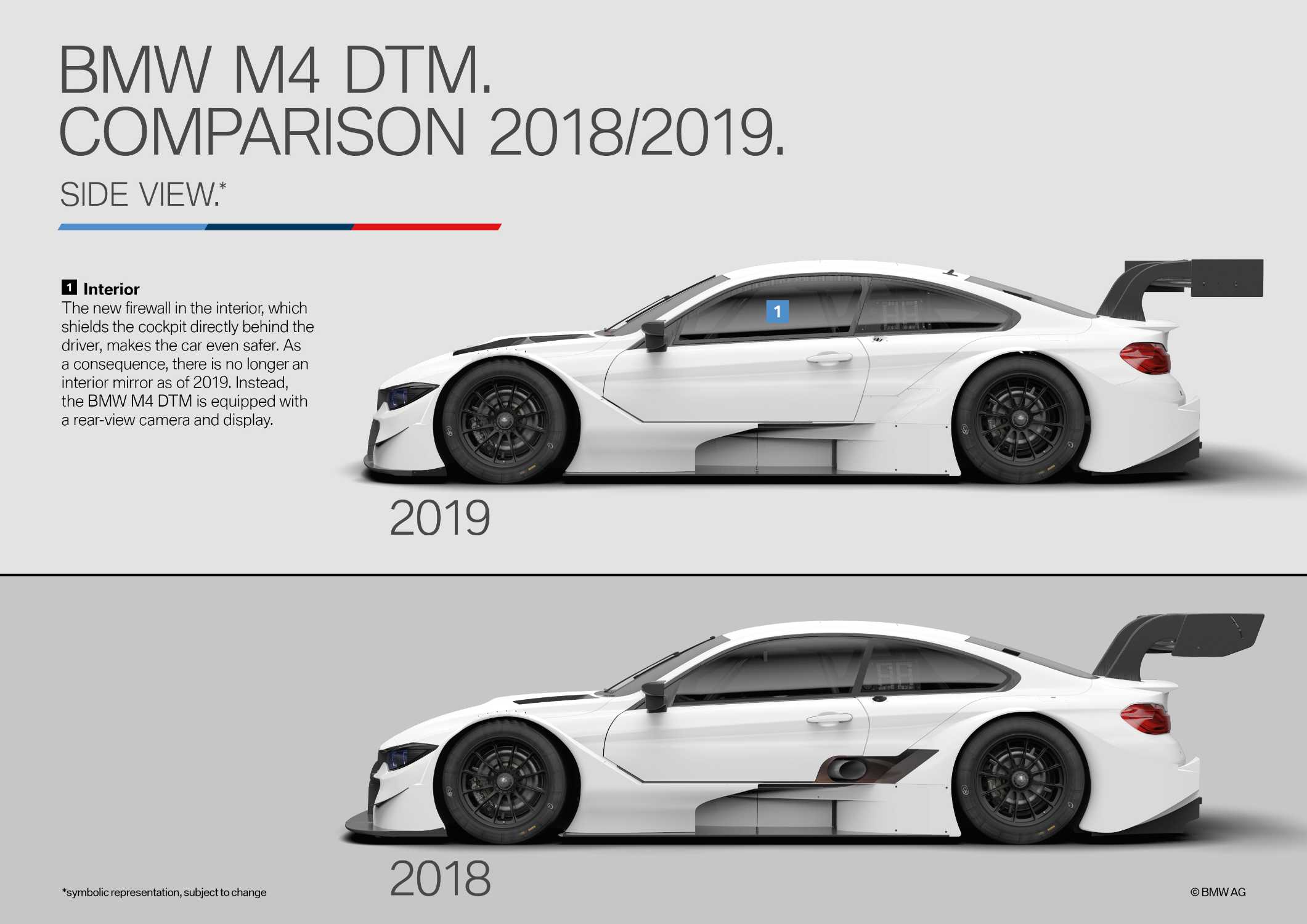 The new firewall in the interior, which shields the cockpit directly behind the driver, makes the car even safer. As a consequence, there is no interior mirror from 2019. Instead, the BMW M4 DTM is equipped with a rear-view camera and display.