The curtain has been raised on the new safety car for the ABB FIA Formula E Championship: “Official Vehicle Partner” BMW i unveiled the new BMW i8 Roadster Safety Car at “Yacht Club de Monaco” on the eve of the Monaco E-Prix (MON). The car has been modified specifically for use at the racetrack and the design is based on its sister model, the BMW i8 Coupé Safety Car.

Monaco. The curtain has been raised on the new safety car for the ABB FIA Formula E Championship: “Official Vehicle Partner” BMW i unveiled the new BMW i8 Roadster Safety Car at “Yacht Club de Monaco” on the eve of the Monaco E-Prix (MON). The car has been modified specifically for use at the racetrack and the design is based on its sister model, the BMW i8 Coupé Safety Car. Guests at the presentation included Pierre Casiraghi, vice president of “Yacht Club de Monaco”, Formula E Founder and CEO Alejandro Agag, and Dr. Robert Irlinger, Head of BMW i. 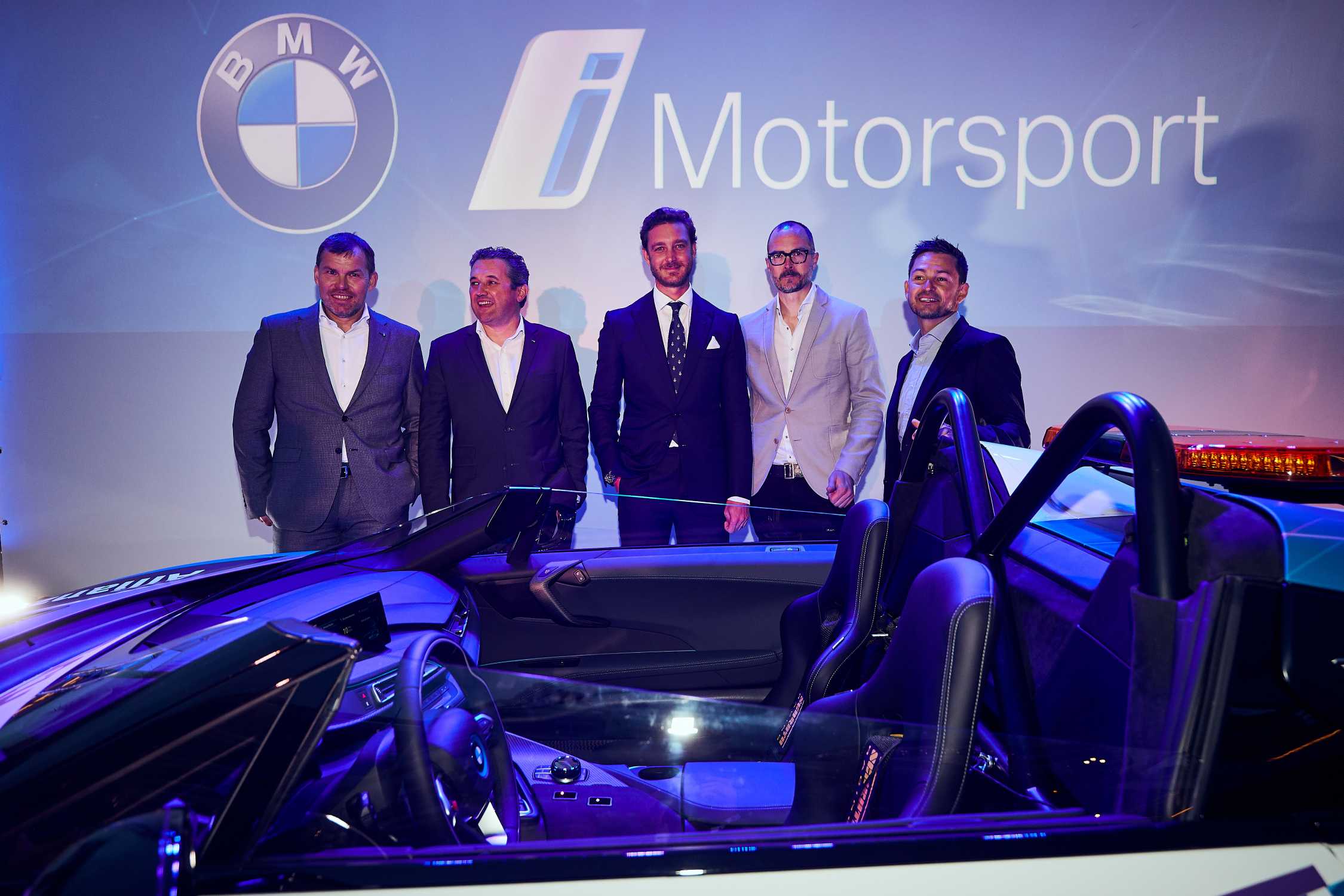 The new BMW i8 Roadster Safety Car (combined fuel consumption: 2.0 l/100 km; combined power consumption: 14.5 kWh/100 km, combined CO2 emissions: 46 g/km)* is the latest addition to the fleet of BMW i Safety Cars. It is the first Safety Car in the world that can be used with an open cockpit. The most striking characteristics of the spectacular design are the rear wing and shortened front windscreen.

“BMW i and Formula E are synonymous with innovation, making them excellently suited to each other. This project is another very good example of the pioneering spirit at BMW i and in Formula E,” said Irlinger. “In implementing the BMW i8 Roadster Safety Car, the BMW i engineers, designers and communications crew have dared to explore new horizons and create an absolutely unique car. The development team behind the Safety Car is akin to a start-up. Our engineers got creative within their own ranks and assembled it on top of their regular jobs. In doing so, they have achieved something completely new. I am very grateful to the FIA and Formula E for showing such enthusiasm towards our innovation and for making it possible to use the BMW i8 Roadster as an official Safety Car.” 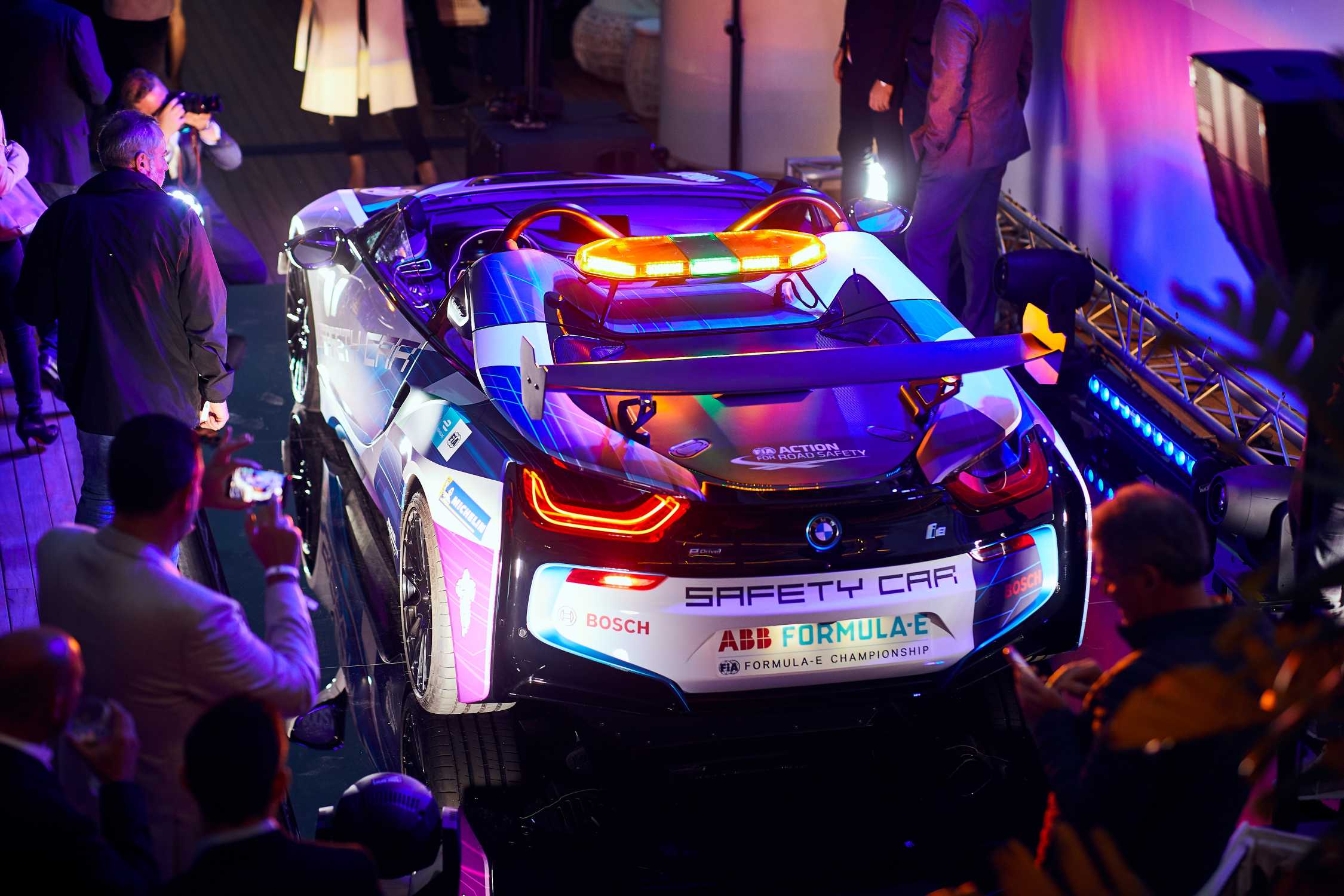 Agag said: “I’d like to thank the BMW i family and the Yacht Club de Monaco for hosting a great event to premiere this new addition to the ABB FIA Formula E Championship. The BMW i8 Roadster Safety Car has a striking design – something which differentiates it from anything we’ve seen before, and what better setting for its presentation than at the Monaco E-Prix. BMW has been a partner since the inaugural season, and their continued support as a vehicle partner and now as a team shows their commitment to electric mobility.”

Technical modifications for use at the racetrack.

Regarding stiffness the BMW i8 Roadster is the perfect basis for a Safety Car. No major modifications were necessary but there still have been some changes for the racetrack version. The most striking modification to the BMW i8 Roadster Safety Car is the front windscreen, which is shorter than the production model. This gives the car a more dynamic appearance. The Safety Car’s centre of gravity is also 15 millimetres lower than the production car. The car has M Carbon Ceramic Brakes, an FIA-approved roll bar, a front splitter and a rear wing for additional downforce.

Modifications necessary for its role of Safety Car have also been made. The light bar is mounted above the rear wing, making it easily visible from all angles in any race situation. The BMW i8 Roadster Safety Car also has a communication antenna and a GPS antenna, an extensive communication system in the cockpit, and a rear-view camera.

Design follows the lead of its predecessor.

Another spectacular aspect of the new Safety Car is its livery design. It evolves the high-contrast BMW logo-inspired alternating blue and white schematic from the BMW iFE.18 and BMW i8 Coupe Safety Car into a decidedly expressive form suitable to open air mobility and the dazzling Monaco street racing context. Blue and purple are the natural colours of raw electricity, while the orange and green accents are the same colours as the lights system on the Safety Car. As with the BMW iFE.18, violet “synapses” surge throughout the livery making explicit the “live” connective network embedded within the design.

The signature BMW Group Motorsport matt black anti-reflective cockpit extension has been updated to be inclusive of passengers, who will take their place in the passenger seat during taxi rides. The resulting “winged“ graphic also mirrors the iconic door opening kinematic of the BMW i8 Roadster.

The BMW i Fleet

BMW i is “Official Vehicle Partner” of the ABB FIA Formula E Championship in Season 5. Spearheading the fleet are two Safety Cars: The BMW i8 Roadster Safety Car, which has been specially modified for use at the racetrack, and the BMW i8 Coupé Safety Car. The BMW i fleet also includes the BMW i3s as “Race Director Car” and the BMW 530e in its role as “Medical Car”.