The MINI - for 20 years the original in the premium segment of small cars.

At the end of September 2000, the modern MINI enjoyed its world premiere at the Paris Motor Show. The successful relaunch of the traditional British heritage brand introduced a completely new category of vehicle and laid the foundation stone for continuous development and diversity in the model range. A tour in an early MINI Cooper recalls memories of two decades packed with driving fun.

Munich. An original celebrates a landmark anniversary. 20 years ago, the MINI was presented for the first time ever in a public arena at the Mondial de l’Automobile in Paris. A unique success story in the automobile sector commenced with the relaunch of the traditional British heritage brand under the umbrella of the BMW Group and the presentation of the models MINI One and MINI Cooper. As the successor to the classic Mini, which ceased to be produced just a few days later after 41 years, the second generation provided all the enablers for another revolution in the small car segment. The MINI was the first premium vehicle in this class. Its modern concept has promoted continuous advanced development to the present day, encompassing driving fun, efficiency, comfort, safety, connectivity and not least model diversity.

A journey through time with an early example of the MINI Cooper provides an ideal opportunity to get on the track of the pioneering character exhibited by the second generation. The ambassador from the initial phase of the British original for the 21st century rolled off the assembly line in October 2001, six months after production had been launched at the MINI plant in Oxford. Three previous owners already experienced loads of driving fun as they powered along some 175,000 kilometres. And like every MINI, it was given a name. This model was dubbed “Sunny”, inspired by the paint finish for the body in Liquid Yellow, which transformed it into a rarity. In the first year of sales for the modern MINI in Germany, only one in every fifteen vehicles was supplied in this colour. The combination with a roof and door mirror caps in Black was even rarer.

The starting signal for the development of the second generation of the MINI was already given in July 1994. Alongside styling details like the short overhangs, round headlamps and hexagonal radiator grille, a top priority for the designers was to transfer the fundamental idea from the initial years of the classic Mini to the modern era of the automobile. The modern MINI similarly needed to be unique, offer space for four people and their luggage, provide an efficient travelling experience and generate enthusiasm with driving characteristics not achieved by any other model in its class. Contemporary aspirations for comfort and maximum safety standards were also taken into account. Once again, a revolutionary new small car was created – geared to the requirements of its era in all criteria, and this time developed and manufactured to comply with all the quality benchmarks of a premium brand into the bargain.

In autumn of 1997, selected journalists were permitted to take their first look at the MINI 2000 study. This generated the MINI fever. The relaunch of the brand and the imminent presentation of the series vehicle were the subjects of intense debate particularly online. In parallel to the world premiere in Paris, national and international MINI websites were launched and more than 100,000 prospective customers interested in the MINI had soon already registered.

The sale of the MINI in the United Kingdom started on 7 July 2001 and the market launch in Germany was celebrated two months later. Already at this point, a weekend shift was introduced at the MINI plant in Oxford for the first time, so as to be in a position to meet the massive demand. And yet the global triumph had only just begun. In Japan – where the classic Mini had a huge fan community – the second generation also encountered enormous interest. The sales launch there was scheduled for 2 March 2002 because this date is pronounced “MI-NI” in Japanese. At last, the turn of US fans finally came on 22 March 2002. The dealers there had already booked orders for 20,000 cars. 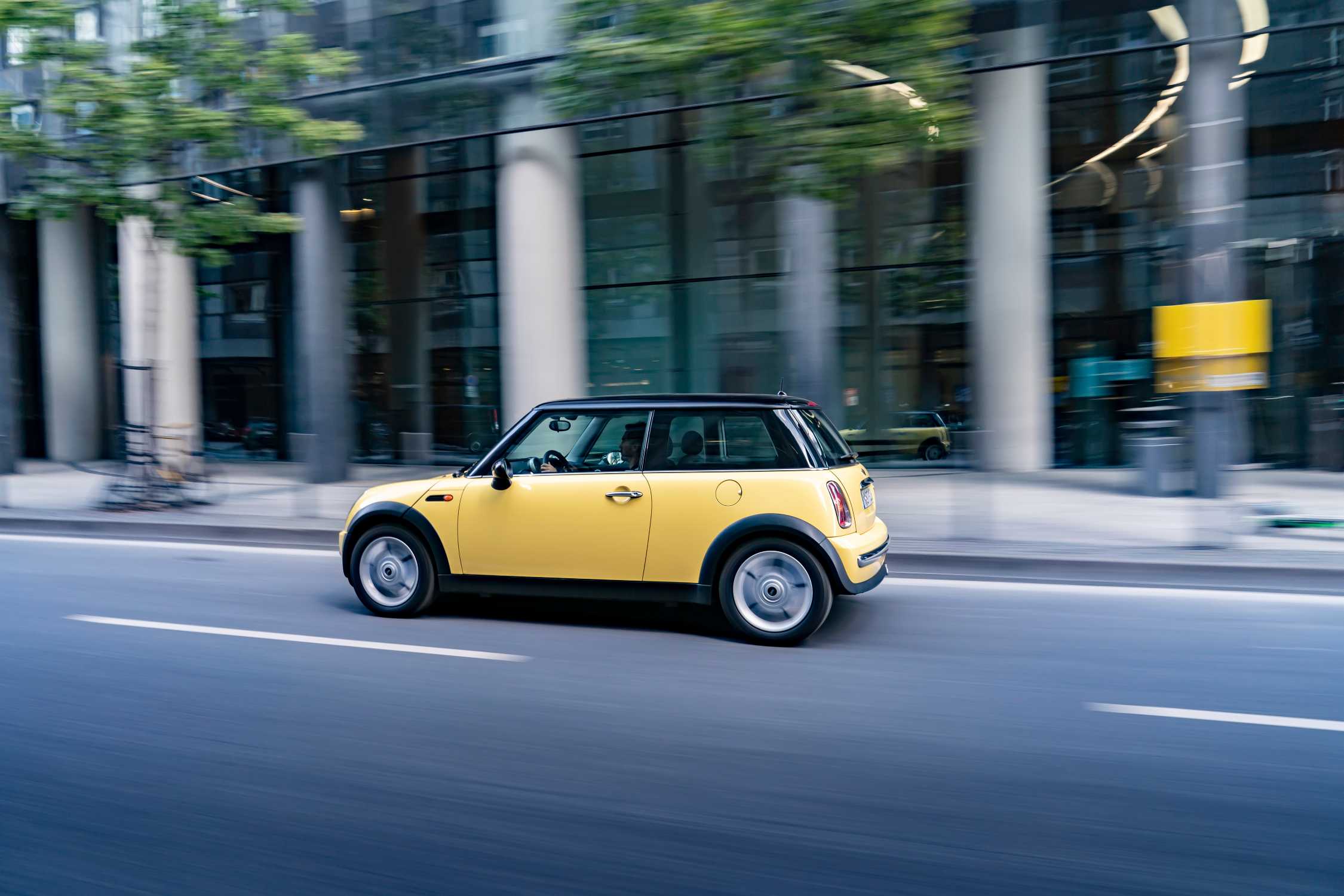 The MINI of the second generation enthralled drivers around the world with its agile handling. Right up to the present day, “Sunny” leaves absolutely no doubt that the MINI has been designed for athletic driving and extreme cornering. The 85 kW/115 hp engine powering the MINI Cooper also provides impressive acceleration capacity. Some 20 years ago, this also impressed John Cooper – the ingenious sports-car designer who had previously paved the way for the classic Mini to take race tracks by storm. “The MINI Cooper puts a smile on your face,” he commented after his first test drive in the eponymous model once more named after him. The elementary design principles from the first generation had been taken over in the new edition with front-wheel drive and the transversely mounted four-cylinder engine at the front. However, the contemporary driving fun unrivalled in the competitive environment was now delivered by a MacPherson front axle with axle shafts of the same length, the multi-link rear axle that is unique in this segment, disk brakes on all four wheels and the series antilock braking system including cornering brake control and electronic brake force distribution.

Right from the start, wide-ranging options were provided for individualising a key component of the typical MINI style. Diversity and premium look within the interior were created by a wide range of features including seats and upholstery, interior trims and steering wheels in many versions, alongside modern equipment options such as automatic climate control, heated seats, panorama sunroof and navigation. The original MINI accessories programme included auxiliary headlamps, white taillights, an aerodynamic package, a range of roof trims as well as additional instruments and even a car phone.

As early as 2003, a diesel engine was rolled out in the second generation of the MINI, and the convertible MINI Cabrio followed in the next year. The model diversity was even greater for the third generation launched in 2006. MINI Clubman, MINI Coupé and MINI Roadster joined the range. Not long after this, the brand succeeded in breaking into the premium compact segment where today the MINI Countryman and the new MINI Clubman create that go-kart feeling in a further dimension. Additional target groups were conquered in what is now the fourth model generation of the small car with the MINI 5-Door.

The interior also demonstrates that reinterpretation of design features in the second generation of the MINI already formed the platform for technological advance. Here “Sunny” expresses its individual style most notably with the large speedometer in the centre of the instrument panel. In the first-generation MINI, the centrally positioned instrument had been replaced by new displays behind the steering wheel when the type MK V Mini was introduced in 1985. And in the latest fourth-generation MINI, speed, engine speed and other driver-related information are shown in a modern instrument cluster on the steering column – also in digital display depending on the model. Nevertheless, the central instrument continues to be an important design and control element to this day. It serves as a control display for navigation, infotainment, telephone and vehicle functions.

Over the period of 20 years, the MINI has become noticeably more mature but its character still remains inimitable. And the fresh colour shade that suits “Sunny” so perfectly is now acting as a very special beacon for the future. Yellow colour accents characterise the MINI Cooper SE, which marks the next evolutionary stage of the original as the first all-electric powered model of the brand.