In the tracks of a legend: with the MINI John Cooper Works in Monaco.

The MINI John Cooper Works is the epitome of extreme driving fun in the premium segment of small cars. The search for its sporting DNA takes us to the scene of the greatest triumph for the classic Mini and on a journey through time back to the golden years of the Monte Carlo Rally.

Munich. Formula 1 on the North Loop of the Nürburgring, the 24 Hour Race of Le Mans, the 500 Miles of Indianapolis or the Monte Carlo Rally. Each motor-sport discipline has its iconic venue. Anyone who has achieved victory there is assured of a fixed place in the annals of history for that particular competition. Drivers who were victorious there not once but three times attain legendary status in the hall of fame. The classic Mini conquered the hearts of motor-sport fans during the special tests in Provence, on the winding roads and hairpin bends of the Col de Turini and on the grand prix circuit through the city streets of Monaco. In each of the years 1964, 1965 and 1967, the pint-sized British car earned overall victory in the Monte Carlo Rally. Since then, this classic rally has been inseparably linked up with the heritage brand and the name John Cooper. On a trip down memory lane with the legitimate successor to the surprise winner in the 1960s, the MINI John Cooper Works (combined fuel consumption: 7.1 – 6.9 l/ 100 km; combined CO2 emissions: 162 – 157 g/km), this intimate relationship is tangible over every kilometre.

A 170 kW/231 hp four-cylinder engine with MINI TwinPower Turbo technology, a sports exhaust system and a model-based chassis with sports braking system and 17-inch John Cooper Works lightweight alloy wheels transform the MINI John Cooper Works into the apotheosis of extreme driving fun in the premium segment of small cars. The sprint from a standing start to a speed of 100 km/h takes the little runabout just 6.3 seconds. In the intermediate sprint from 80 to 120 km/h, a time of just 5.6 seconds even leaves blue-riband sports cars behind. 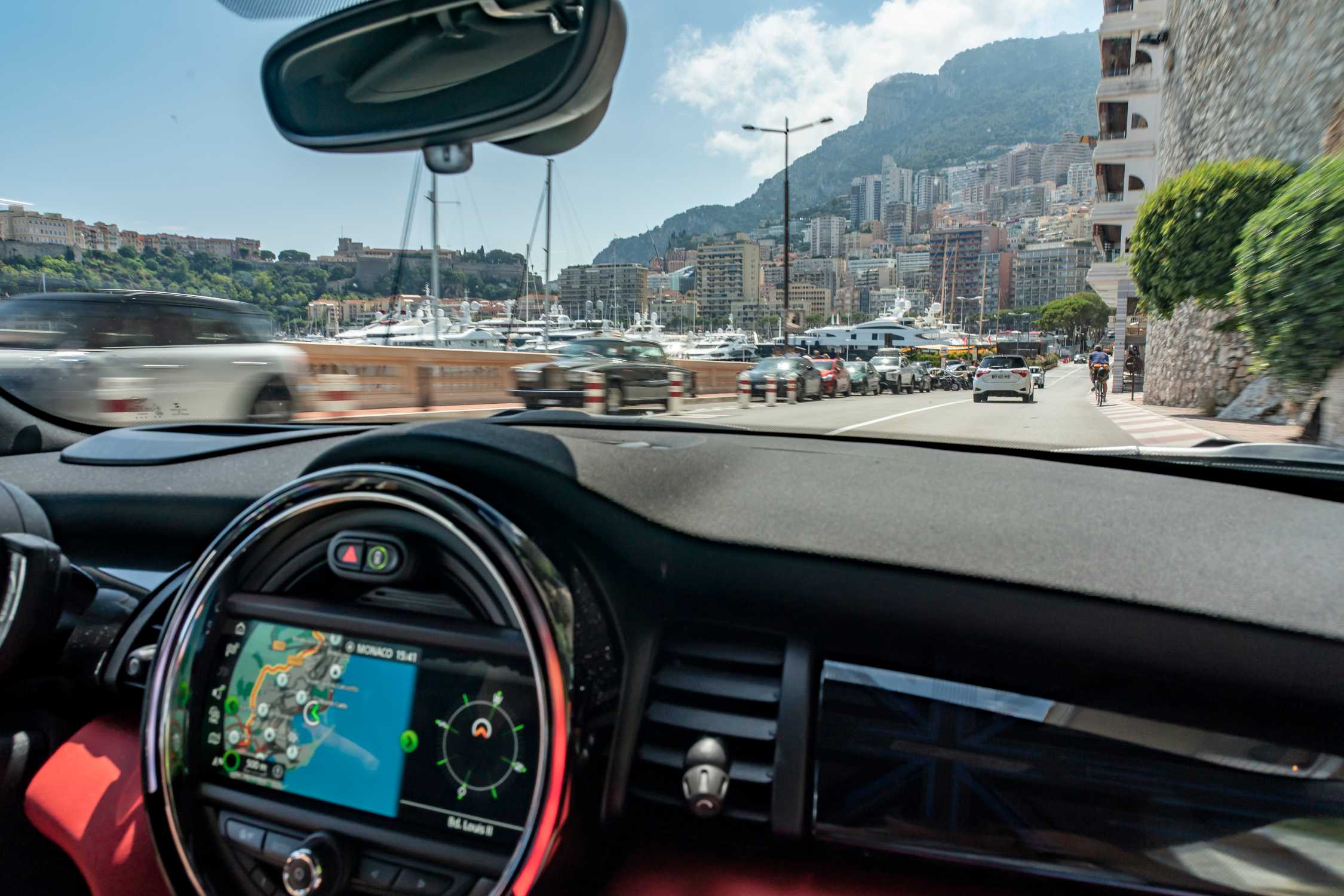 This connects it with the classic Mini driven by Paddy Hopkirk (1964), Timo Mäkinen (1965) and Rauno Aaltonen (1967) to outstanding successes, always achieved against much bigger and more powerful opponents. This was an era when vehicles from different classes competed against each other in the Monte Carlo Rally. A handicap formula was used to provide appropriate compensation when allocating points to balance out the differences in weight, displacement and performance. This enabled the agility and reliability of the classic Mini combined with the rally skills of its drivers to tip the scales in the battle against the powerful and muscular projectiles of other manufacturers.

Today, anyone setting a course for Monaco over the pass roads through the mountains of Southern France is following in the tracks of yesteryear’s rally legends. Even driving under summer conditions, by day and in the modern MINI John Cooper Works fitted with particularly powerful brakes, multifaceted driving stability systems and automatic air-conditioning, we can gain a good impression of the challenges to be mastered by the competitors, for example in the legendary “Night of the Long Knives” more than 50 years ago. The steep roads leading up to the Col de Turini pass, the icy road surfaces and pitch-black darkness provided a scenario that demanded a huge amount of courage and skill from the drivers.

Spectacular landscapes dominate the picture in the French Maritime Alps. However, the perspective soon changes and the street canyons, waterside promenades and Port of Monaco come into view for the first time. The road runs in parallel with the coastline along the Avenue Agerbol and the Route de la Moyenne Corniche offering lots of opportunities to stop and enjoy the breath-taking panoramic view over the principality beside the sea.

In the south of Monaco between the Port de Fontvieille and the football stadium of AS Monaco, the MINI John Cooper Works goes past the Roseraie Princesse Grace, a rose garden laid out to celebrate the memory of Princess Gracia Patricia. From there, it’s not far to the princely residence and the city centre of Monte Carlo. In the yachting marina and on the lookout for a parking space in front of Monte Carlo’s casino, the MINI John Cooper Works bustles along with a self-assuredness similar to the headstrong classic Mini of an earlier era on the authentic rally route through the phalanx of luxury saloons and super sports cars from Germany, Italy and the United Kingdom that dominate the roads of Monaco. The car signals sophisticated understatement with its standard John Cooper Works Aerodynamic Kit and the striking rear spoiler, and highlights the certainty of generating maximum driving fun on a minimalist footprint. 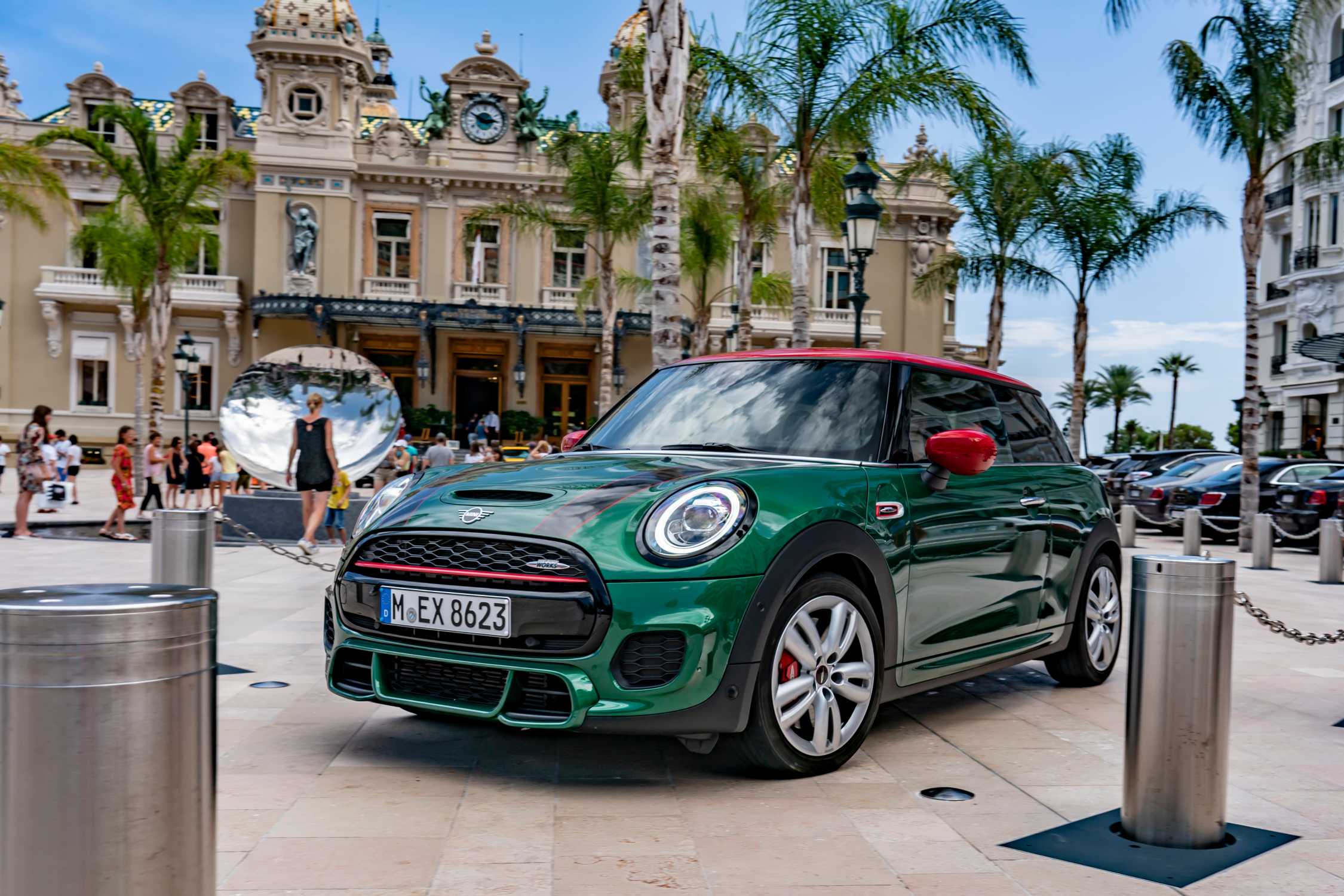 Nowhere more intensely than in Monte Carlo does the MINI John Cooper Works demonstrate that genuine race feeling can also be experienced in urban everyday traffic. After all, this is a place where you can go on a city tour as you drive along a genuine grand prix circuit. But you need to make sure that you go around clockwise just like on race weekends. Ready, steady, go and off into the famous Sainte-Dévote right-hand corner and then uphill in the direction of the casino. Driving along the street circuit, you can see the trail of bronze statues depicting famous racing cars and their drivers. The MINI John Cooper Works is really in its element once it gets to the hairpin bend that has caused problems for genuine Formula 1 rockets for decades. Shortly afterwards, it shoots through the tunnel under the Fairmont Hotel with pizzazz, round the Piscine corner circumventing the swimming pool and then the equally famous Rascasse corner in front of the eponymous restaurant. The diminutive elite athlete fitted with a cockpit styled specifically for the model and the John Cooper Works sports seats transforms this drive into a unique experience constituting a perfectly melded union of motor-sport tradition and modern driving fun – even while still keeping to the speed limit.