More than seven million vehicles with all-electric or plug-in hybrid drive systems by the year 2030.

Munich. With a ten-year plan for sustainability, the BMW Group is underscoring its commitment to the goals of the Paris climate agreement, the main focus being on the expansion of electric mobility. Today, the BMW and MINI brands featuring all-electric and plug-in hybrid drive systems respectively already account for approximately 13.3 of all new registrations Europe-wide (source: IHS Markit New Registrations July 2020 Report). This corresponds to 1.5-fold of the average share of all brands, which is around 8 percent. The company expects this figure to rise to a quarter by 2021, to a third by 2025 and to 50 percent by 2030.

Vehicles of the BMW and MINI brands featuring electrified drive systems are now offered in 74 markets worldwide, where more than 500,000 electrified vehicles were sold by 2019. By the end of 2021, this figure will probably rise to over a million. In spite of pandemic-related restrictions, more vehicles from the BMW Group were sold during the first half of 2020 than in the corresponding previous-year period. BMW Group sustainability goals aim at putting more than seven million vehicles with electrified drive systems on the road worldwide by 2030, two thirds of them all-electric variants. As a result of the massive expansion of electric mobility, emissions produced by BMW Group vehicles per kilometre driven will be reduced by around 40 percent by the year 2030. 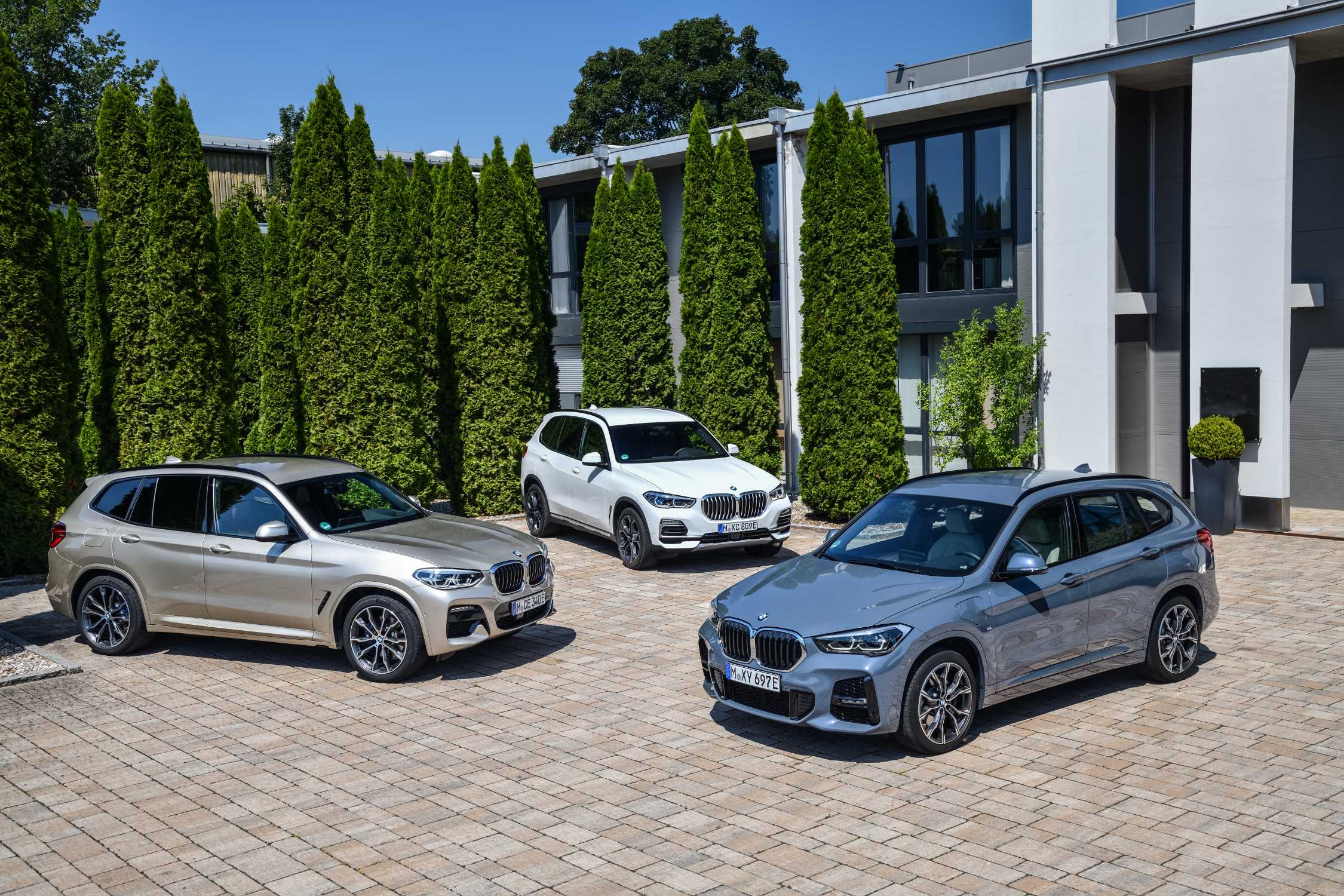 The current model offensive is paving the way towards this goal, with the company following the “power of choice” approach in order to take account of customer needs and legal requirements on the global automotive markets. The BMW X3 is the first model available either with highly efficient petrol and diesel engines including 48-volt mild hybrid technology, with a plug-in hybrid drive system or all-electric drive system.

In future, further series models with electrified and with conventional drive systems will be built on a single production line. For example, the next generation of luxury sedans of the BMW 7 Series will be offered also as a purely electric model variant. Also the high-volume series BMW 5 and BMW X1 will be brought to market not only with conventional internal combustion engines and plug-in hybrid systems, but also with all-electric drive units.

Electrification of drive systems is an integral part of the future field D-ACES (Design, Autonomous, Connected, Electrified und Services/Shared) defined by the BMW Group in their NUMBER ONE > NEXT strategy. Today, the BMW Group already offers the widest selection of corresponding vehicles worldwide. These models also impress with sporty characteristics. Furthermore, their attractiveness is attributable to an expressive design and advanced technology in the areas of operation and digitalisation, which are oriented to the lifestyle of contemporary target groups.

The fifth generation of BMW eDrive technology is celebrating its premiere in the new BMW iX3. The quality of its components – electric motor, high-voltage battery, charging technology and power electronics – is the result of the experience gained by the BMW i brand in the electric mobility sector since 2011. The BMW Group relies on the in-house development of all components for BMW eDrive technology. One example of the advancements achieved in this way is the high-voltage battery for the BMW i3, the storage capacity of which has doubled since the launch of this model despite unchanged installation space.

Pure driving pleasure, sheer driving fun: all-electric mobility with the BMW iX3, the BMW i3 and the MINI Cooper SE. 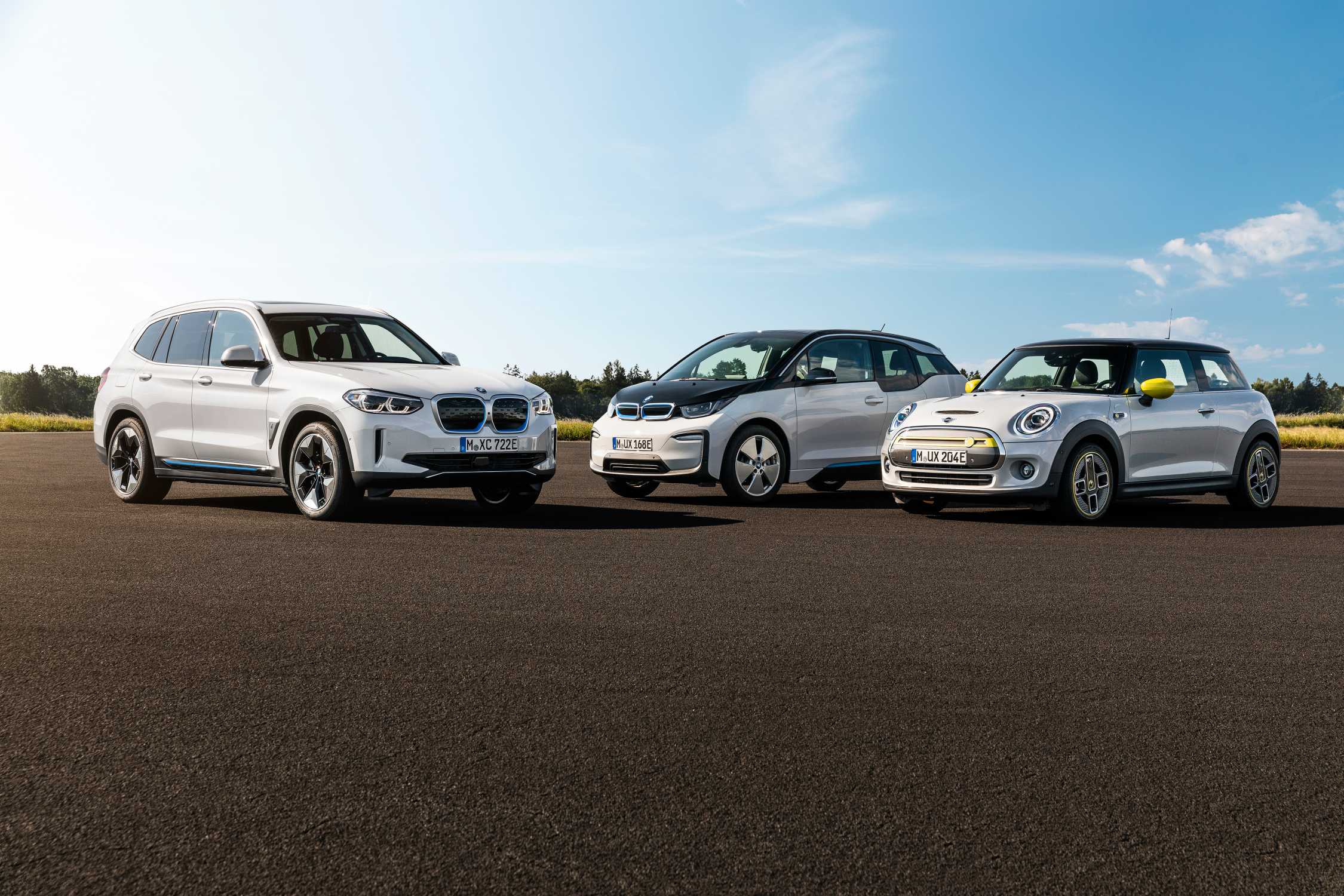 With the fifth generation of BMW eDrive technology featured in the BMW iX3, the efficiency and power development of the electric motor, the energy content of the high-voltage battery, charging capacity and the intelligent control of the overall system reach a new level. The car’s newly developed electric motor delivers 210 kW/286 hp and drives the rear wheels. The first all-electric Sports Activity Vehicle combines sportiness and a high range of up to 520 kilometres – not by means of particularly large batteries, but with an intelligent overall concept for efficiency and dynamics. As from 2021, the fifth generation of BMW eDrive technology will also be deployed in the models BMW i4 and BMW iNEXT.

All-electric drive, an aluminium chassis and a passenger cabin made from carbon fibre reinforced plastic (CFRP) – this is how the BMW i3 still convincingly asserts its role as the pioneer of premium electric mobility almost seven years after its debut. Thanks to the lightweight material carbon, the BMW i3 achieves sporty driving performance even with a comparably small battery, whereby vehicle weight is at the same level as that of a conventional model in its segment. The electric synchronous motor for the BMW i3 generates a maximum power output of 125 kW/170 hp, even achieving 135 kW/184 hp in the case of the BMW i3s.

The more powerful version of the drive system is also deployed in the MINI Cooper SE. The most crucial difference to the BMW i3s is that the first purely electric vehicle from MINI features front-wheel drive, this being characteristic for the brand. In contrast, the BMW i3 and the BMW i3s rely on the classic rear-wheel drive concept. The flexibility of BMW eDrive technology is also reflected by the model-specific version of the high-voltage battery, which is T-shaped and located deeply into the vehicle floor. As a result, the amount of space available to the occupants as well as the luggage compartment volume in the MINI Cooper SE are exactly the same as those of conventionally powered model variants of the 3-door MINI.

The best of both worlds: plug-in hybrid models from BMW and MINI.

Thanks to intelligently controlled interaction between both drive systems, the plug-in hybrid models from BMW and MINI combine the best of two worlds. They facilitate purely electric driving in urban traffic and when commuting between home and the workplace as well as a long overall vehicle range for long-distance travel. Electric range is increased by means of intensive regeneration during coasting and deceleration phases. Moreover, intelligent energy management offers the possibility to save capacity of the high-voltage battery specifically for locally emission-free driving within built-up areas. Preconditioning of the interior is standard and guarantees optimised comfort in any season thanks to auxiliary heating and air conditioning.

In the plug-in hybrid models of the BMW 7 Series, the BMW X5 xDrive45e and the all-new BMW 545 e xDrive Sedan, the electric motor, which is integrated into the Steptronic transmission, operates in conjunction with a straight six-cylinder petrol engine, delivering a system output of 290 kW/394 hp.

A brand-typical combination of sportiness and sustainability also characterises the models whose plug-in hybrid systems comprise a four-cylinder petrol engine and an electric motor that is also integrated into the 8-speed Steptronic transmission. Under especially high loads the system output generated by the two power units can be increased by an additional 30 kW/40 hp for a short period. This XtraBoost function enhances the system output, for example during kick-down manoeuvres, to up to 215 kW/292 hp, providing for significantly more spontaneous power development than is the case with conventional petrol and diesel engines. In the BMW 3 Series and BMW 5 Series, this plug-in hybrid system is offered for four models respectively, the Sedans and Touring models being available with four-wheel and rear-wheel drive. Furthermore, the experience of driving the BMW X3 xDrive30e reaps the benefit of two motors and four driven wheels.

Products and services from BMW Charging and MINI Charging facilitate simple and comfortable charging at home and when out and about. These encompass various different Wallbox types, including installation service, individual offers for the purchase of green electricity and access to the world’s largest network of public charging stations comprising more than 155,000 charging points in Europe alone.  Moreover, the BMW Group is extending its corporate charging infrastructure substantially to around 4,100 charging points in Germany alone.

From the raw material to recycling: focusing on the entire value chain.

The BMW Group combines the further development of electric mobility with a holistic understanding of sustainability, whilst always bearing in mind the entire value chain and the complete production cycle – from the procurement of raw materials, production and service life of the vehicle up to later recycling. Today, the total environmental impact of a plug-in hybrid model, known as the CO2 footprint, is already significantly lower than that of a conventionally powered vehicle. The BMW X1 xDrive25e, for example, already achieves a 31 percent lower value than the corresponding petrol-driven model when using charging current from the EU electricity mix over its complete life cycle. If the vehicle uses green electricity exclusively over its entire service life, the CO2 footprint is even 55 percent lower.

For the future, the BMW Group is developing, among other things, a sustainable reusable material cycle for battery cells. The key commodities cobalt and lithium originate exclusively from suppliers who comply with stringent standards as regards ecological and social sustainability. They are obtained by the BMW Group and passed on to the battery cell producers. The electric motor of the latest BMW eDrive generation is produced without raw materials from so-called rare earths. Furthermore, electricity from renewable sources is used exclusively for the production of all components of BMW eDrive technology of the latest generation. As a result, around 10 million tons of CO2  emissions will be avoided over the next ten years.

Overall, from this year, all of the BMW Group’s production locations worldwide will be supplied with 100 percent green electricity. The company will also substantially increase the proportion of secondary materials used in their new vehicles. In future, the further use and recycling of high-voltage batteries will become of major importance. After being used in vehicles with electrified drive systems, they can serve as stationary storage units for wind and solar power, which is currently the case on the premises of the BMW Leipzig plant. An efficient recycling of raw materials does not follow until after this. Whilst a recycling quota of 50 percent is currently demanded Europe-wide, the BMW Group and the German recycling specialist Duesenfeld have jointly developed a process with which a recycling quota of more than 95 percent is planned – including graphite and electrolyte.