In tune with all the senses. Oliver Heilmer and Renzo Vitale talk about design, sound and the special symbiosis at work in the fully electric MINI Cooper SE.

Munich. The MINI Cooper SE has recently hit the streets. But what you can’t see at first glance is that its design is now also something you can hear. Head of MINI Design Oliver Heilmer and Renzo Vitale, BMW Group Sound Designer, give some insights into the Design of the MINI Cooper SE and the soundscapes that come with it.

Munich. The MINI Cooper SE has recently hit the streets. But what you can’t see at first glance is that its design is now also something you can hear. Head of MINI Design Oliver Heilmer and Renzo Vitale, BMW Group Sound Designer, give some insights into the Design of the MINI Cooper SE and the soundscapes that come with it. Our conversation covers attention to detail, MINI sound, the interplay of information and feeling, and how an icon of automotive design sees its future.

Mr. Heilmer, the first MINI was an instant icon.

What is it that attracts you about taking a design as familiar as this to the next stage?

Oliver Heilmer (OH): For me, the appeal lies in the scale of the challenge. Updating such an iconic design is no easy task. The stronger an icon is – and MINI has a big tradition – the greater the importance not only of innovation but also continuity. So this is about smoothing the intersection, integrating the historic and the new; the MINI Cooper SE is equally identifiable as a MINI and an electric car.

Does that mean there wasn’t a great deal that needed changing when it came to the MINI Cooper SE?

OH: When a car has proven itself and, for example, fits perfectly into the context of urban mobility – like the MINI 3-door – it may seem like nothing much needs doing. But things are, of course, rather more complex when you get to work. Sometimes it’s actually more challenging than designing a new vehicle from scratch. To make it possible to tell a fully electric MINI Cooper SE apart from a MINI with conventional combustion engine, for example, we started by looking at what each element contributes to the overall effect. It was striking that changes to some details caused the design – and therefore the perception of a MINI – to pretty much fall apart. We were keen to retain the core of MINI while at the same time having an eye on the future. That’s why we decided to focus on specific accents which differentiate a MINI Cooper SE from a combustion-engined MINI.

Which design details are electric-specific?

OH: One example is that the MINI Cooper SE has a largely blanked-off front grille. As you’ll know, an electric vehicle doesn’t need cooling air in the same place as one running a combustion engine. That’s why the MINI Cooper SE grille only has a slim horizontal slot for air to enter through. The remainder of the grille is closed flush and finished in a contrasting, modern grey colour. The electric drive system and the feeling of modernity that go with it are clearly reflected inside the car by elements such as the digital instrument cluster, which displays all the relevant information for the electric driving experience. We also very clearly wanted to go a new direction with the design of the wheels, which are asymmetric, almost static in appearance. We have created something that very purposefully breaks with the classical description of a wheel rim. The accent colour Energetic Yellow also points to the electric character of the MINI Cooper SE and can be found in various places, including the mirror caps and the “E” logo on the front grille, tailgate and side scuttles. To ensure the colour accentuation has the desired effect, the rest of the car is deliberately restrained. 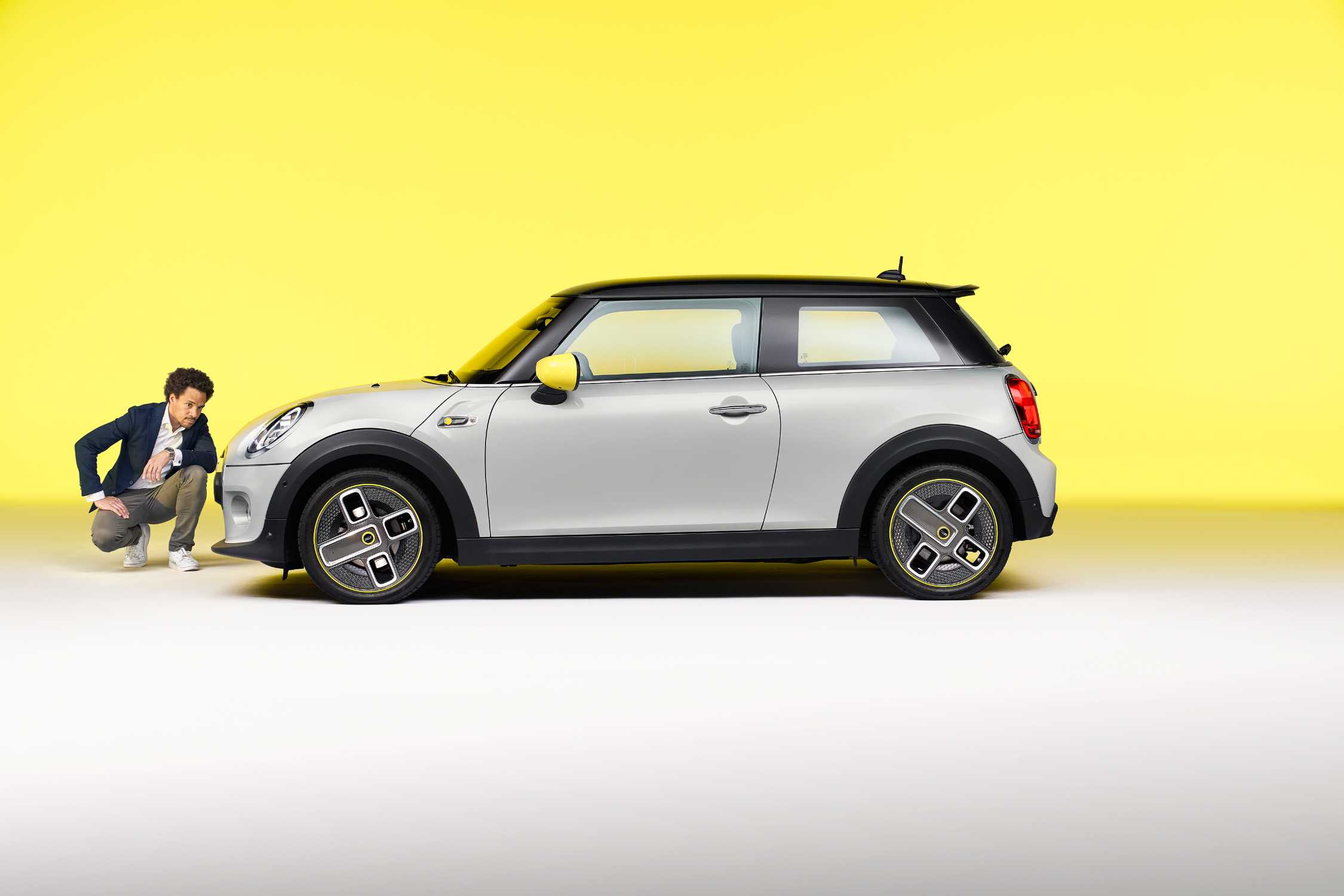 Has electrification opened up a new approach to design? Or even a new kind of emotionalisation?

OH: Definitely. The overall experience is everything. Electrification gives us the starting point to think about things fundamentally differently – and not only in the aesthetic sense. To put it simplistically, it enables us to explore new worlds. What we’re endeavouring to do looking forward is to bring the sensory interaction of various design elements, such as the styling, sound or scent of a vehicle, into the MINI in a coherent way.

The MINI Cooper SE already follows a new approach to design in some areas. What we want to do at MINI in the future is offer design for all the senses – a carefully orchestrated interplay of experiences, rather than singular elements. This affects different areas; there is an exterior and an interior, harmonisation with materials and colours – which is very important at MINI. And then there is the user interface. One question that comes up here is: how do I interact with different themes and what do I see on the display during this process?

Of course, sound also plays a key role. What used to be a rather dry topic – creating a parking warning sound, say – can become an emotional experience with electric mobility. We can decide for ourselves how an electric MINI should sound, what kind of emotional reaction we spark with it, what feelings we want to communicate. For example, Renzo Vitale, who developed the composition for the MINI Cooper SE, explained its sound to me in the way we generally describe design. I realised immediately that this approach could open up a totally new world of experiences for us and for MINI. 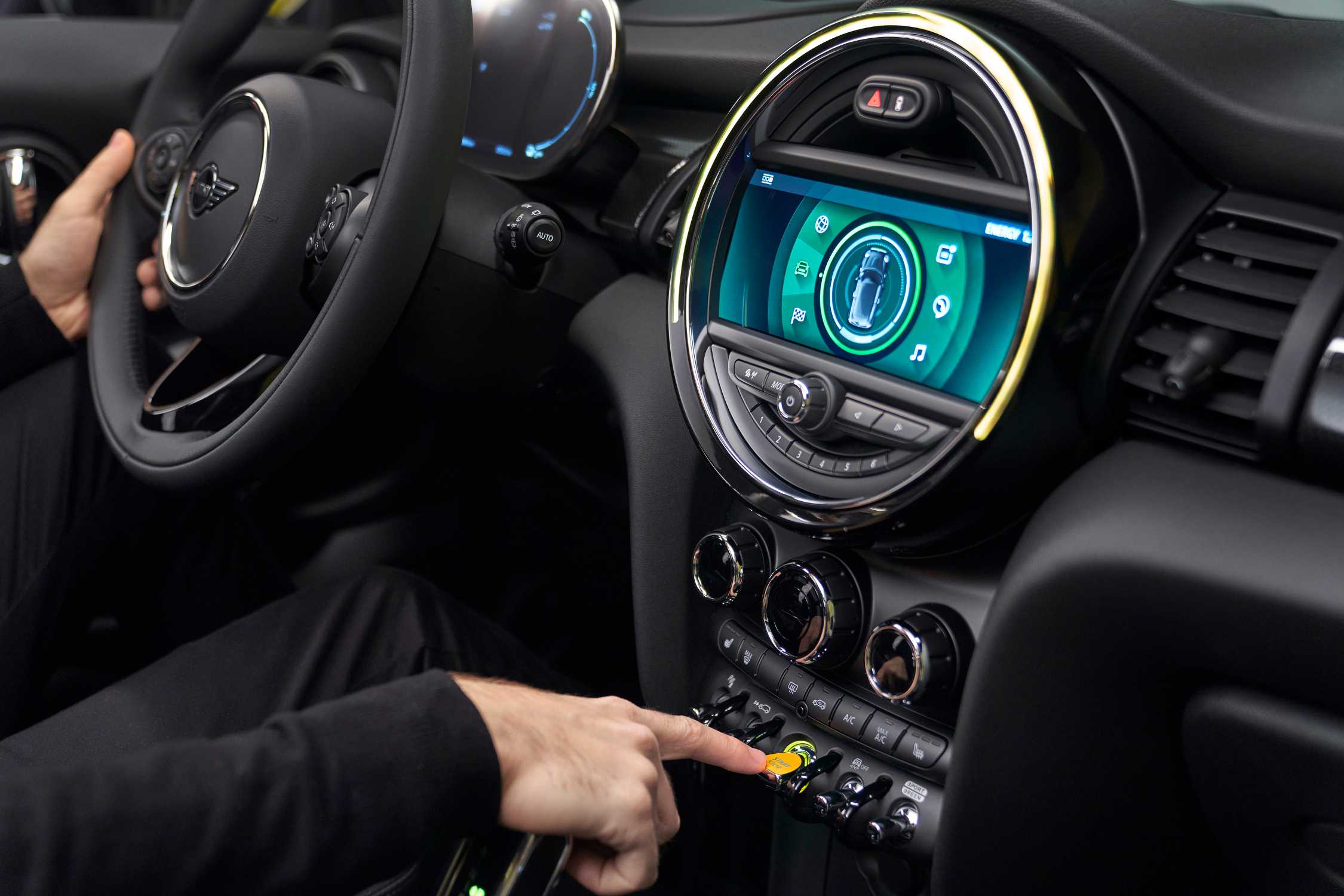 What was the main challenge in developing the sound for the fully electric MINI Cooper SE?

Renzo Vitale (RV): Fundamentally, the sound a vehicle makes should trigger emotions and at the same time transmit information. Our aim was to replicate the two sides of the coin in the MINI but also draw a clear line of differentiation between them. For many people, the sound of a combustion engine stirs strong emotions. But we were clear from the outset that it didn’t make sense to simulate a combustion engine note. There are no gear changes, after all. And when the driver accelerates, they have all of the drive system’s energy at their disposal straightaway. The content of the sounds I create and my main sources of inspiration stem from design. For the MINI Cooper SE, for example, I translated the visual impressions created by the wheels and yellow accents into sound.

How do you develop the sound of an electric vehicle?

RV: I start by looking at the vehicle as a whole. I see it as an instrument. Musicians use instruments to generate feelings. In the same way, the vehicle should trigger feelings in the driver – and other road users, come to that. Of course, sound is always information too, and these two aspects – emotion and information – must both be represented. The vehicle sounds different depending on what we do here. For example, the MINI Cooper SE exudes a friendly, welcoming, almost luminous character. The moment you pull away, a dynamic sound is produced that gives you the feeling of forward motion and speed. Regardless of how the vehicle is being driven – with a demanding or a restrained style – the sound has to be able to illustrate all driving states and at the same time reflect the brand and make it something that can be experienced. I think we have achieved this with the MINI Cooper SE.

How does the MINI Cooper SE sound? How does MINI sound?

RV: For me, MINI sound can be split into three parts: passionate, energetic and inspirational. MINI has a twinkle in its eye, an element of the surprising about it – a twist. And that should be something you can also experience with your eyes closed. Sound is one of a vehicle’s means of expression, like a voice which it uses to communicate with us. Incidentally, silence is also a form of communication, an element of sound. I spent a long time looking at the MINI Cooper SE when I was composing its sound, so that I could really capture its character. I tried to translate the car’s lines into audible form. The voice of a MINI is luminescent. It’s saying: “you’ve got a friend close by”.

Which direction is MINI design heading in? Will we end up seeing a smartphone on wheels, dressed up in an iconic shell?

OH: A vehicle is more complex than any mobile phone. The whole area of autonomous driving shows us clearly how complex it is. Rather than a mobile phone on wheels, we see the MINI of the future as a “partner in crime”. Many owners give their MINIs a name, and we want to build on that, very simply and intuitively, so that a real bond can emerge – a connection that extends beyond purely driving. That doesn’t need to be hugely intricate technologically. More than anything, it should bring a smile to people’s faces.

RV: For example, it is conceivable that the MINI will be able to sense the driver’s mood and respond with sound; it will offer them a sound world which makes a moment better. This can be a kind of soundscape, a sound signal or a piece of music. The vehicle is expressing itself and giving the occupants the feeling of not being alone.

OH: Exactly. And then, in addition to sound, there is also light to consider. Not only in terms of specific information appearing on the display, but as lighting moods. We’re talking here ideally about the interplay of light and sound. A MINI kind of gives me the feeling that someone is there who I can communicate with. An all-encompassing approach is critical here – the connection between tactile experiences, sound, moods and materials. We want to make this new MINI feeling something customers can experience.