Fresh sea breeze and stormy wind in your hair: On the island of Sylt in the MINI John Cooper Works Convertible.

Germany's northernmost island is worth a visit at any time of year. There is much to discover between mudflats and waves. In-restaurants and bars as well as top-class shopping venues alternate with unspoilt nature and mile-long beaches. And in between, there are plenty of opportunities for open-air driving fun in the salty North Sea air.

Munich. When Hamburg residents speak quite unpretentiously of taking a trip “to the island”, it often sounds as if they’re just taking a quick drive to another part of the city. Yet Sylt lies at the very top of North Frisia and is thus still around 180 kilometres away from the Hanseatic city as the crow flies. The quickest route is via motorway 7, making it the ideal choice for a short trip with the MINI John Cooper Works Convertible (fuel consumption combined: 7.4– 7.1 l/100 km (WLTP), 7.4– 7.1 l/100 km (NEDC); combined CO2 emissions: 167 – 161 g/km (WLTP), (169 – 163 g/km (NEDC). A few kilometres beyond the city limits, the speed limit is lifted. Now the 170 kW/231 hp four-cylinder turbo engine of the extremely sporty four-seater can really make sure that the distance between city and island actually shrinks by the minute.

The fast ride ends shortly before Flensburg. From there it’s just under 50 kilometres on country roads to the "Sylt Shuttle" in Niebüll. The car park in front of the loading station is car-free. The MINI John Cooper Works Convertible rolls onto the motorrail train at walking pace, accompanied by the typical "clack, clack, clack" as it crosses the carriage lanes. Now all we can do is: Switch off the engine, apply the parking brake, open the windows and wait. And there it is, that incomparable mixture of North Sea air, salt on your lips and the crying seagulls. The motorrail train travels a short distance through small villages and over flat land, then the wagons roll onto the ten-kilometre-long Hindenburgdamm, which was inaugurated in 1927 and became the real driver of Sylt tourism. From that time on, artists such as Emil Nolde, Hermann Hesse or Stefan Zweig felt just as magically attracted to the North Sea island as intellectuals, bon vivants and actors such as Marlene Dietrich, Hans Albers or famous athletes like Max Schmeling. Thomas Mann noted in the guest book of the artists' boarding house "Kliffende" in Kampen in 1928: “I have lived deeply by this shattering sea." 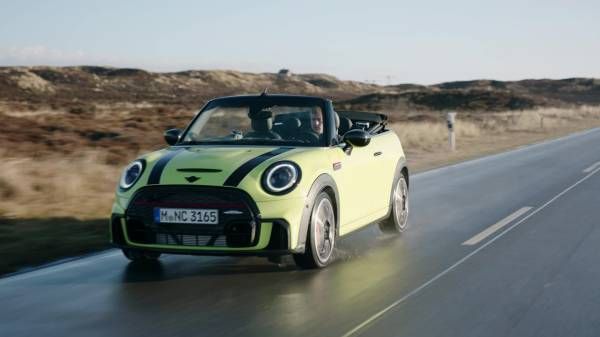 The crossing to Westerland station takes just under an hour. We quickly drive off the motorrail train and take a short walk to the Miramar Hotel, one of the oldest hotels on the island with a magnificent view over the Westerland spa promenade and the sea. This morning the sky is as blue as in a Nolde painting. So, on the outskirts of Westerland, it’s time to open the top. You can also do this while driving at a maximum of 30 km/h. It takes 18 seconds. Then the MINI John Cooper Works Convertible takes off along the dead straight country road heading north. The wind blows into the interior at gale force. But our senses take in more: this intense, salty sea air, the rich, earthy aroma of the tidal flats, the herbaceous, wild scent of the dunes - and a distinctive landscape with small hills and shaggy grass that changes colour depending on the wind and light.

After a good six kilometres we reach Kampen. The place is loved by some for its glamour, shunned by others because of celebrities and their exalted behaviour. An artists' colony in the pre-war period, Kampen was awakened from its slumber in the 1960s by the bon vivant and photographer Gunter Sachs. The corporate heir held wild parties on the hitherto tranquil island - and especially in Kampen. On the “whisky mile”, where luxury vehicles abound in the summer, there is a high density of those who consider themselves to be particularly important. Pretty much at the end of Kampen’s Strönwai, which is the street's real name, is the "Pony Club", a classy bar and celebrity disco for almost 60 years, which Gunter Sachs helped to make even more popular when he drove his classic Mini right up to the dance floor one evening. The MINI John Cooper Works Convertible doesn't put on too discreet a show either on its drive through Kampen. 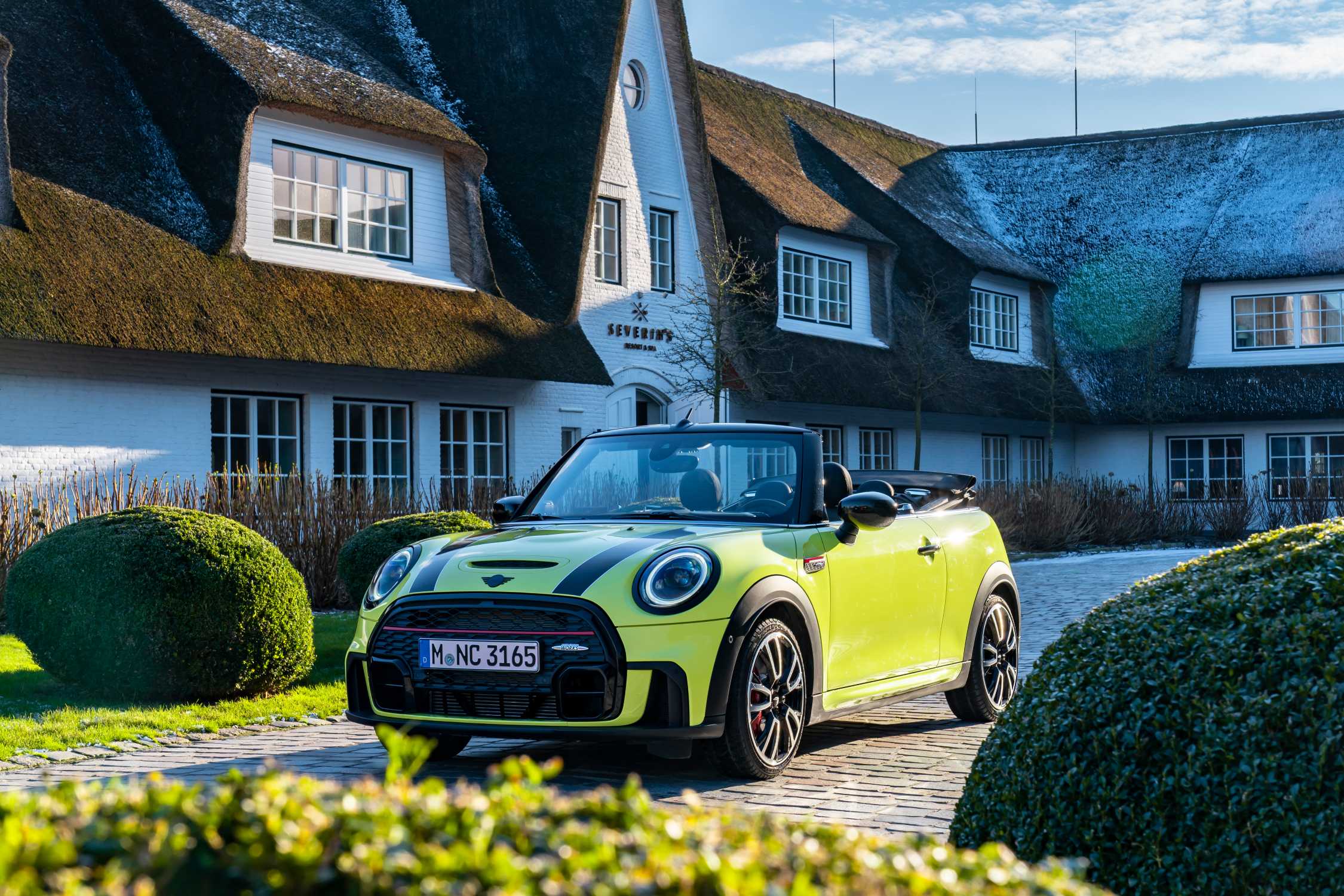 Its new Zesty Yellow bodypaint makes it an eye-catcher everywhere. But the open-top four-seater wears this bold colour with style. The new reduced design language draws attention to the MINI’s hallmark design features, such as the hexagonal radiator grille and the round headlights. The Union Jack design rear lights are a subtle reminder of the brand's British origins. And the powerful contours of the rear diffuser, in the centre of which the two 85-millimetre stainless steel tailpipes of the exhaust system protrude into the open air, also signal authentic sportiness. This also applies to the sound of the sports exhaust system, which underscores the spirited sprinting capability of this open-top athlete.

Holidays on Sylt are very hip, the demand for accommodation continues to increase. 4.8 million tourists came in 2019. Property prices are reaching dizzying heights. Those who can afford it don't want to rent, they want to buy. Preferably one of the typical thatched houses. The consequence is that entire villages are now ghost towns that are only busy in summer and at weekends or on public holidays. In Kampen, two thirds of the houses are now holiday villas. The houses are not bought to live in, but to own. As a result, locals can no longer afford their island. Most of them now live on the mainland - as do the seasonal workers. 150,000 of them work on Sylt during the high season. Only 20,000 people are registered as residents.

But Kampen also makes visitors aware how impermanent everything is. The "Kliffende", one of Sylt's most traditional buildings, is only 40 metres as the crow flies from the edge of the Kampen cliff. Every year, fierce autumn and winter storms gnaw at the cliff and the raging sea reclaims piece after piece of cliff. It was just over 20 years ago that five wealthy private individuals bought the house. Now they have to watch how the eight million investment slowly disappears - or they have to put a lot money into additional coastal protection.
But man is not in conflict with the forces of nature everywhere on Sylt. In addition to 40 kilometres of beautiful sandy beach, the island also boasts twelve nature reserves and seven landscape conservation areas. A toll road leads through the middle of the heath-covered landscape to the “Ellenbogen” (elbow), the northernmost point in Germany. This part of the island is privately owned and protected. A narrow road leads up to the List lighthouse, a mixture of laid concrete slabs and rutted asphalt. A unique wasteland with salt marshes, marram grass and wild thyme. Sheep cross your path, thousands of birds buzz around, the wind seems to blow relentlessly, changing its direction and constantly humming new melodies together with the surf.
The “northernmost fish stall in Germany” was built at the beginning of the 1970s at the old harbour in List. What began with a vendor's tray and smoked eel turned into one of the country's most successful catering businesses, now with 40 locations nationwide. The menu now features: Prawns and champagne. And yet, even on the east coast of Sylt, it is above all nature that stuns all visitors to the island. It is part of the Wadden Sea tidal flats, which have been a UNESCO World Heritage Site since 2009. The east coast of Sylt is also a stopover for migratory birds on their way south. Up to twelve million animals rest in the Wadden Sea every autumn.
Keitum is also located on this side of the tidal flats. Here, prosperity shows itself in a different way than in Kampen. Old thatched-roof houses lie behind high rosehip hedges, bicycles instead of sports cars are used for short-distance travel, rubber boots instead of high-heels, thick six-thread cashmere jumpers instead of glittering dresses and jackets. Here, everything is a bit more laid back, more Hanseatic. And those who get married on Sylt do so in Keitum's St. Severin Church, the oldest sacred building in Schleswig-Holstein.
If you really like it quiet, head for Morsum in the extreme east of the island. The village is surrounded by meadows and pastures, dikes and heath land. Morsum was once one of the first Frisian settlements on Sylt. The main attraction is the Morsum cliff with its sloping colour gradations, evidence of millions of years of geological history. Here the island landscape is far more stable than in other places on Sylt, for example in Rantum, where there is only about 550 metres between the sea and the tidal flats, or in Hörnum, whose southern is eroding away year upon year.
A base for seaplanes was built in Rantum in the 1930s. Since its renaturation in the mid-1960s, the area has been a bird sanctuary - an air base of the civilian kind, so to speak. Today's visitors are more familiar with Rantum because of the "Sansibar", one of the most famous restaurants on the island. Excursion boats depart from Hörnum to the seal banks and the neighbouring islands. The town's lighthouse is one of the most popular photo motifs on Sylt.
The natural forces of the North Sea are particularly present in Hörnum. The North Sea permanently gnaws away at the beach of Hörnum-Odde, and the losses are counteracted year after year with sand flushing. The primal forces of nature, the roar of the surf, the cry of the seagulls, the wind in your hair and the salty air make up the charm of the island of Sylt, which can be experienced particularly intensively when driving with the top down in the MINI John Cooper Works Convertible.