MINI goes on holiday - with the greenest camper fleet in the world.

With its hybrid-specific all-wheel drive and a system output of 162 kW/220 hp, the MINI Cooper SE Countryman ALL4 is ideally equipped for excursions into the countryside. With the ALL4 Trim or Classic Plus Package, its equipment is supplemented by a roof rail, among other things. A roof tent can be easily mounted on the roof rails with the appropriate railing rack.

The MINI Cooper SE can be equipped with mobile night quarters in the same way. The purely electrically powered small car is the only model in its competitive field that can also be equipped with roof rails. The matching carrier system can be found in the MINI Original Accessories range. And you're ready to go. The MINI Cooper SE carries the roof tent swiftly across the country: thanks to the aerodynamically optimised profile of its body, the roof tent does not noticeably restrict the temperament of the 135 kW/184 hp MINI Cooper SE, which can sprint from standstill to 100 km/h in 7.3 seconds. The MINI Cooper SE Countryman ALL4 is just as relaxed about the increase in power. As a robust all-rounder, it also masters its role as a touring vehicle with flying colours.

On a joint camping trip, the two electrified models reveal their qualities each in their own way. According to the WLTP test cycle, the MINI Cooper SE has a range of 203 to 234 kilometres. The electric range of the MINI Cooper SE Countryman ALL4 is up to 59 kilometres. However, it can use the intelligently controlled interaction of the combustion engine and electric motor to replenish the energy reserves of its high-voltage battery on the road. 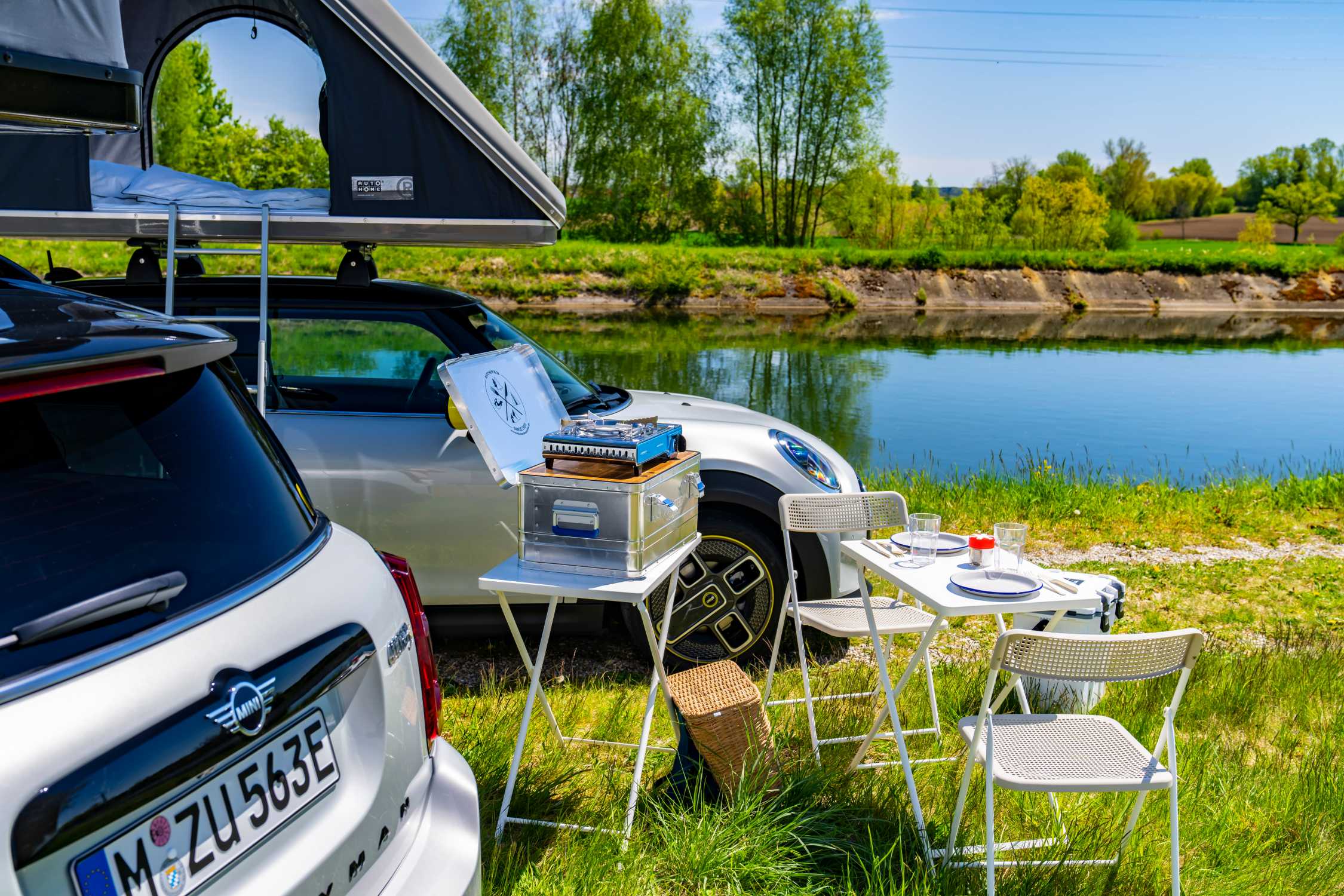 On winding country roads, there is a lot of driving pleasure. The battery, which is located low to the ground in both models, also contributes to this, shifting the vehicle's centre of gravity downwards and thus ensuring even more agility. The MINI Cooper SE Countryman ALL4, together with the MINI Cooper SE, rolls onto the camping site so quietly that even the crackling of twigs under the tyres can be heard.

The cautious approach signals respect for nature. Those who not only hike or cycle there, but also spend the night afterwards, experience it even more intensively - and can enjoy the view of the landscape from their sleeping place in the roof tent. Discovering the world from above - that's even possible from the roof of a MINI.

The shelter can be erected at dizzy heights within a few seconds. After releasing the safety catches on the housing, the tent structure lifts up automatically with the help of gas springs. The eight rungs of the fold-out aluminium ladder can be climbed just as quickly. Inside, there are two comfortable sleeping berths. In summer heat, the windows can be rolled up, and thanks to the mosquito nets in front of them, no pests can get inside.

Sleeping bags, luggage and provisions for longer camping trips for two can be stored in the luggage compartment of the MINI Cooper SE, which can be expanded from 211 to 731 litres after folding down the rear seat backrest. This provides the same stowage volume as in the conventionally powered model variants of the MINI 3-door. The MINI Cooper SE Countryman ALL4, with its five doors, five fully-fledged seats and a luggage compartment volume of 405 to 1 275 litres, is a true all-rounder in the premium compact segment.

There is therefore also enough space for all kinds of holiday companions that add a touch of comfort to the simple life in the midst of nature. A glance at the digital cockpit display of the MINI Cooper SE and the MINI Cooper SE Countryman ALL4 reveals that there is no lack of energy. The charge level of the high-voltage batteries is still well within the green zone. If you have a cool box on board, you can enjoy a chilled drink. The audio system plays subtle music. There is also more than enough power to charge the smartphone. When a mobile espresso machine is added, the threshold from camping to glamping is finally crossed.

And if the energy reserves do run low, this is no problem either. Many campsites are now equipped with charging points. So nature lovers can enjoy the beauty of the landscape on a hiking tour without worrying, while their electrified MINI charges up fresh energy to complete the onward journey to the next campsite or the drive home in the most sustainable way possible.