Powder snow and fairytale castles: with the MINI John Cooper Works Countryman through the winterly Allgäu.

All-wheel drive is an advantage in any traffic situation. But what four driven wheels are really capable of can only be experienced off the beaten track - and on snow. On an excursion with the MINI John Cooper Works Countryman, outstanding power and the ALL4 system provide ideal conditions for enjoying the white landscape in an extremely sporty way.

Munich. Snow is much more than a collection of frozen water droplets. Its crystal lattice structure depends on the temperature and humidity when the flakes form. At its best, snow is loose, powdery and white. When it falls from the sky in the right places, preferably mountainous ones, it forms the basis for attractive leisure activities such as skiing, snowshoeing or sledding. Likewise, the beautiful snow can provide an extra dose of skiing fun. The prerequisite for this is some skill with the accelerator pedal, steering wheel and brake, as well as the right vehicle. The MINI John Cooper Works Countryman (fuel consumption combined: 8.3 - 7.6 l/100 km; CO2 emissions combined: 188 - 173 g/km according to WLTP) impresses with its qualities not only on the road and on unpaved terrain, but also on snow.

The fascination that the extremely sporty all-rounder arouses in winter road conditions is the result of an extraordinary combination of pure temperament and precisely controlled power distribution. The outstanding power of its 225 kW/306 hp four-cylinder turbo engine with a maximum torque of 450 Nm is transmitted to all four wheels via an 8-speed Steptronic Sport transmission as standard. This is ensured by the ALL4 all-wheel drive system, also standard, which is also supported by a differential lock for the front wheels integrated into the transmission. This overall package and the model-specific suspension technology guarantee extreme performance on all roads - no matter how snowy and ungritted they may be. This is because the drive torque is always well-dosed to those wheels that can transfer it to the maximum extent to the road or track.

This makes the MINI John Cooper Works Countryman ideal for a winter excursion from Munich towards Lake Constance through the mountainous landscape of the Allgäu. The Swabian part of the northern Alpine region is known for its diverse rock formations and as a habitat for numerous rare animal and plant species. As a holiday region, the Allgäu attracts both recreation-seeking and sporty visitors in the summer and winter months who appreciate intact nature, leisure activities and impressive cultural experiences. 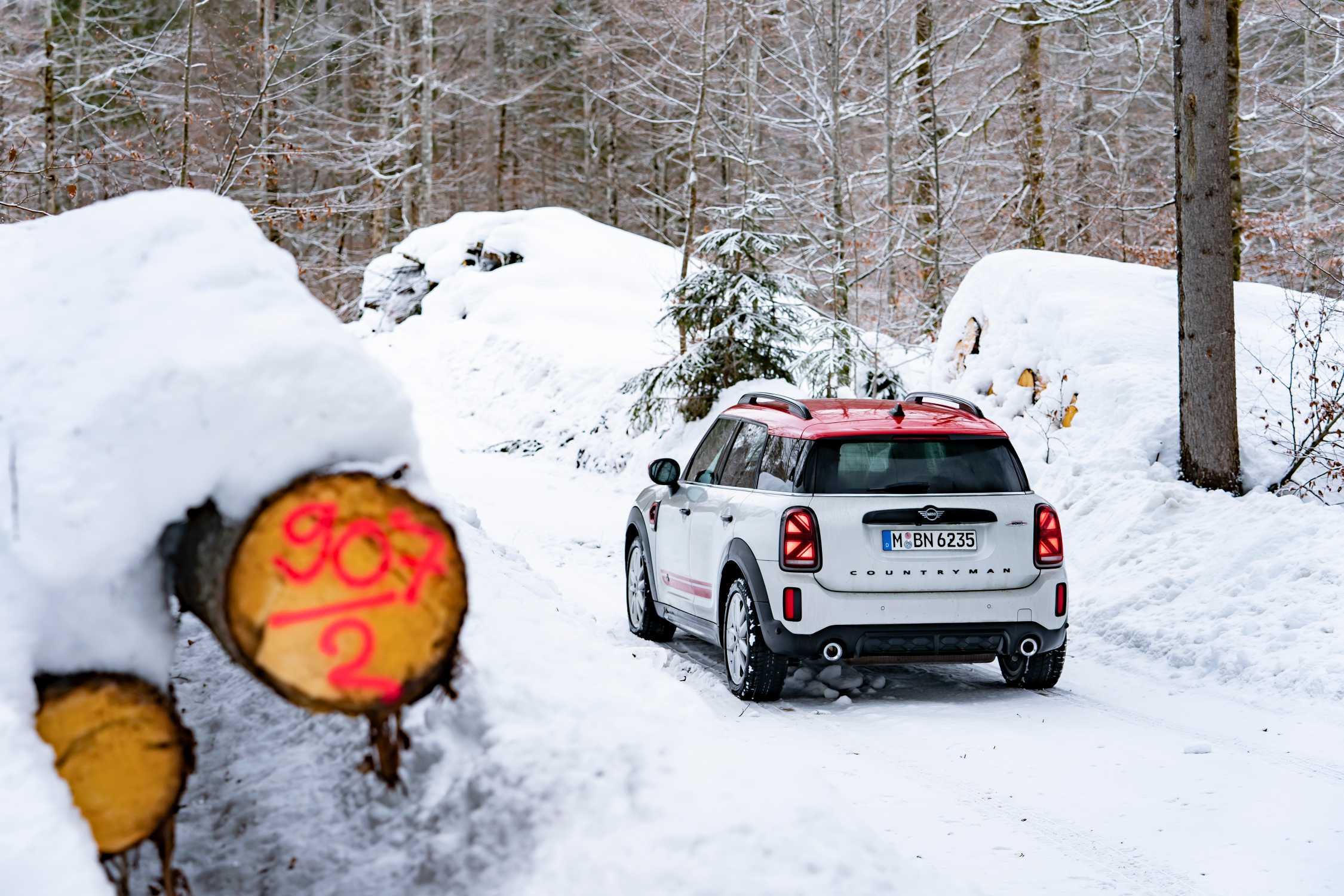 In the MINI John Cooper Works Countryman, driving on narrow mountain roads and through the snowy, glittering winter wonderland can be easily enjoyed together with friends or the whole family. With its four doors and large tailgate, five fully-fledged seats and a luggage compartment volume that can be expanded from 450 to up to 1 390 litres, the extremely sporty all-rounder not only offers the comfort level required for longer excursions, but also the corresponding transport capacities. Optional extras include a roof rail for attaching ski racks or transport boxes and a rear luggage rack preparation for transporting bicycles.

A first photo stop takes the MINI John Cooper Works Countryman near Oberstdorf. The community on the edge of the Allgäu High Alps is considered the winter sports capital of the area. There are 140 prepared kilometres of winter hiking trails where guests can experience snow-covered mountain landscapes, idyllic huts and enchanting nature. Just under 20 kilometres further north, the traveller arrives in Sonthofen in the Bavarian district of Oberallgäu. The climatic health resort with the coordinates 47°31' north latitude and 10°20' east longitude is the town furthest south in Germany.

On the winding country roads of the region, the MINI John Cooper Works Countryman benefits from its precise steering and confidently controllable handling even in highly dynamic driving situations. A body structure and chassis connection with optimised rigidity contribute to the agile driving characteristics of the top athlete. In addition to model-specific modified components, the chassis also features suspension and damping tuning refined with racing know-how, as well as DSC (Dynamic Stability Control). The standard equipment of the MINI John Cooper Works Countryman also includes a sports brake system with four-piston fixed calliper disc brakes at the front and single-piston fist calliper disc brakes at the rear wheels. It can also be fitted with an Adaptive Suspension as an option.

Driving dynamically over mountain passes and serpentines, the MINI John Cooper Works Countryman quickly reaches its optimum operating temperature even in wintry weather - and after about 50 kilometres in an easterly direction, one of Bavaria's most popular sights. Neuschwanstein Castle, not far from Füssen, was commissioned by the Bavarian King Ludwig II, who first moved in there 15 years after construction began in 1869, but died just two years later. Since then, his fairytale castle has repeatedly been used as a film set. It can be impressively photographed from a variety of perspectives, which is why it can sometimes get a little crowded on the streets around the castle hill.

Following this extremely popular stopover, it's time to get back to solitude - for example in the Ammergau Alps, Bavaria's largest nature reserve. The extensive region stretches between the rivers Lech and Loisach. To the south, the Zwischentoren valley in the Außerfern region separates the Ammergau Alps from the Lechtal Alps. To the north, they merge smoothly into the Alpine foothills. In search of fresh snow, the route leads from here over the border into Austria, past the Plansee lake and on to Ettal, where the monastery of the same name, a world-class cultural monument, can be visited. Even on mountain roads that have not yet been cleared of snow, the MINI John Cooper Works Countryman unfalteringly makes its way as dusk quickly sets in. The adaptive LED headlights with variable light distribution and matrix function for the high beam, available as an optional extra, optimise visibility and thus safety both in the dark and in heavy snow.

Those who spend the night in the Ammergau Alps can not only look forward to a fantastically beautiful winter landscape the following day, but also to a real programme of contrasts. A walk along the almost 85-kilometre-long meditation trail between the Wieskirche church in Steingaden and Linderhof Castle in Graswangtal near Ettal promises a relaxing experience of nature. Afterwards, the MINI John Cooper Works Countryman with its irresistible driving sound, even when idling, is already waiting to storm up the next snowy pass road.