Munich. Its expressive design still remains hidden under camouflage foil, its athletic proportions are already perceptible, and the extreme performance characteristics of the new BMW XM make every test drive an experience even for seasoned professionals. Within the framework of driving dynamics testing, BMW M GmbH's first high-performance car with electrified drive is currently completing the final phase of its series development process. Just a few months after the presentation of the BMW Concept XM, prototypes of the production model are demonstrating the high level of maturity of their drive and suspension technology in an intensive test programme. The BMW XM is ready to redefine high performance, luxury and sovereignty.

The countdown to the world premiere of the BMW XM perfectly accompanies the anniversary activities marking the 50th anniversary of BMW M GmbH. In December 2022,  series production will commence at the US BMW Group Spartanburg plant. "With the debut of the BMW XM at the end of our anniversary year, we are looking into the future, where BMW M will continue to break with conventions and push boundaries," says Franciscus van Meel, Chairman of the Board of Management of BMW M GmbH. "Electrification gives us new opportunities to demonstrate that unmistakable M feeling in a fascinating way and transfer it to the road. Regardless of their drive technology, our performance and high-performance cars will continue to possess an unmistakable and authentic M character in the future."

For their test drives on public roads, the development and test engineers established an exceptionally demanding and varied route profile. The intelligently controlled interaction of the new eight-cylinder engine and the particularly powerful electric motor can thus be tested and refined in detail under a wide range of conditions: from intermediate sprints on the motorway to winding country roads and stop-and-go traffic in the city. Steep mountain passages and narrow serpentines offer the ideal terrain to demonstrate the driving dynamics potential of the M xDrive system, including the electronically controlled differential lock in the rear axle transmission. 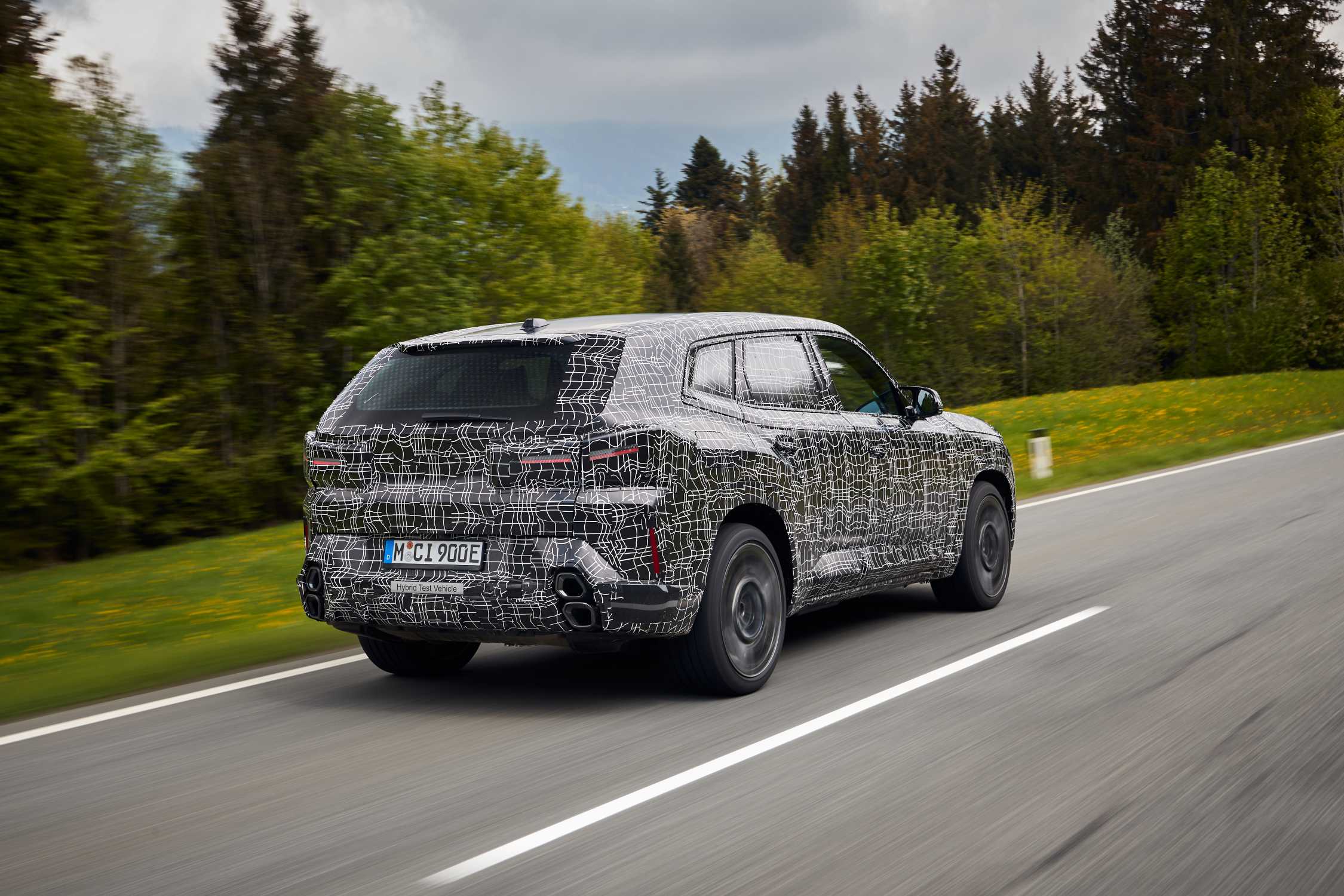 With an electric range of around 80 kilometres according to WLTP (estimated 30 miles EPA range, not an official EPA value) the new BMW XM can also be driven not only within built-up areas but also over longer distances in a virtually silent and locally emission-free cruising mode. The spontaneous reactions of the electric motor to every movement of the accelerator pedal are intensely perceptible. In Electric mode, its instantaneous power delivery ensures dynamic acceleration, for example when starting off at traffic lights or exiting a town.

The fact that the new BMW XM was designed as a pure BMW M automobile is also evident from its almost perfect 50: 50 axle-load distribution and its suspension technology. The new BMW XM is equipped with an Adaptive M Professional suspension as standard. This also includes a model-specific version of the springs and the electronically controlled shock absorbers as well as – for the first time in a BMW M automobile – an electromechanical roll stabilising system with 48-volt technology. With the additional Active Roll Comfort function, it reduces rolling movements due to uneven road surfaces on one side. At the same time it actively adjusts the body height on the corresponding side of the vehicle. Integral Active Steering is also part of the standard equipment of a BMW M automobile for the first time and promotes agility and cornering dynamics as well as driving stability when changing lanes.

With this combination, a model-specific M brake system and the latest generation of the integrated brake system, as well as optional M light-alloy wheels up to 23 inches in size, the new BMW XM offers handling that can be precisely controlled even in highly dynamic driving situations. It also excels through supreme day-to-day and long-distance comfort. The optimum balance between performance and ride comfort is achieved in the intensive testing programme under everyday conditions. The experienced developers aboard the pre-production model accurately record how the suspension systems react to ruts, bumps or dirty stretches of road and how confidently sudden changes of direction, spontaneous lane changes or long downhill stretches with high deceleration requirements are mastered. As part of the integrated application of all drive and suspension systems, their fine-tuning ensures that the combustion engine and electric motor as well as all suspension components and control systems of the BMW XM constitute a perfectly coordinated overall package for a new form of typical M performance.