The new BMW 5 Series Sedan therefore has all the tools it needs to continue the remarkable success recorded by its predecessors; more than 7.6 million BMW 5 Series cars were sold across its first six generations. “The seventh generation of the BMW 5 Series points the way into the future, as we have defined it with our NUMBER ONE > NEXT strategy. We see technological leadership, emotionally rich products and digitalisation as essential factors in achieving success. With the expansion of our model portfolio in the large-vehicle classes, we are satisfying the wishes of many customers. I’m in no doubt that the new BMW 5 Series will set new benchmarks technologically, but also have huge emotional appeal. It remains the epitome of the business sedan,” says Harald Krüger, Chairman of the Board of Management at BMW AG. 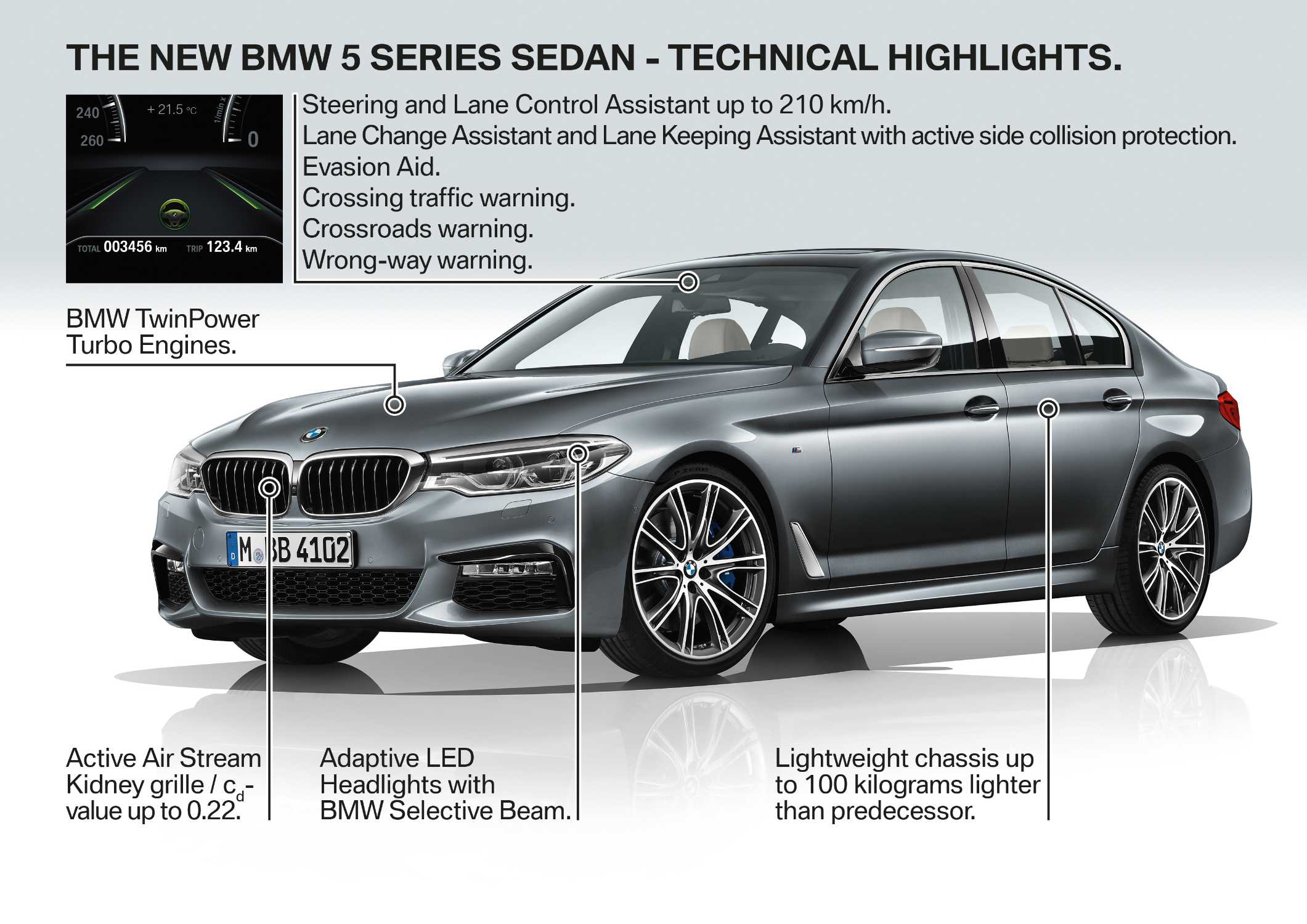 The next step to automated driving.
A wealth of assistance systems are on hand in the new BMW 5 Series to offer the driver unbeatable support – not only at critical moments but also in less demanding situations at the wheel, such as traffic jams, slow-moving traffic and monotonous stretches of motorway. To this end, it is fitted as standard with a stereo camera, which teams up with optional radar and ultrasound sensors to monitor the area around the car. New features in the BMW 5 Series alongside the evasion aid and Crossing traffic warning are the Lane Change Assistant and Lane keeping assistant with active side collision protection. The latter keeps an eye on the lane markings and the area around the car, and actively helps the driver to avoid looming collisions by applying corrective steering inputs.

The BMW 5 Series also takes another step towards automated driving with extended functions for the optional Active Cruise Control (ACC) system and Steering and Lane keeping assistant. These include adoption of speed restrictions, which the optional Intelligent Speed Assist communicates to the cruise control system (the driver can adjust this figure by +/– 15 km/h / 9 mph). From rest to 210 km/h (130 mph), the car can relieve the driver of acceleration, braking and steering duties, as desired. The intelligent Auto Start Stop function now adjusts its responses to the route and traffic conditions and therefore offers even greater driving comfort. 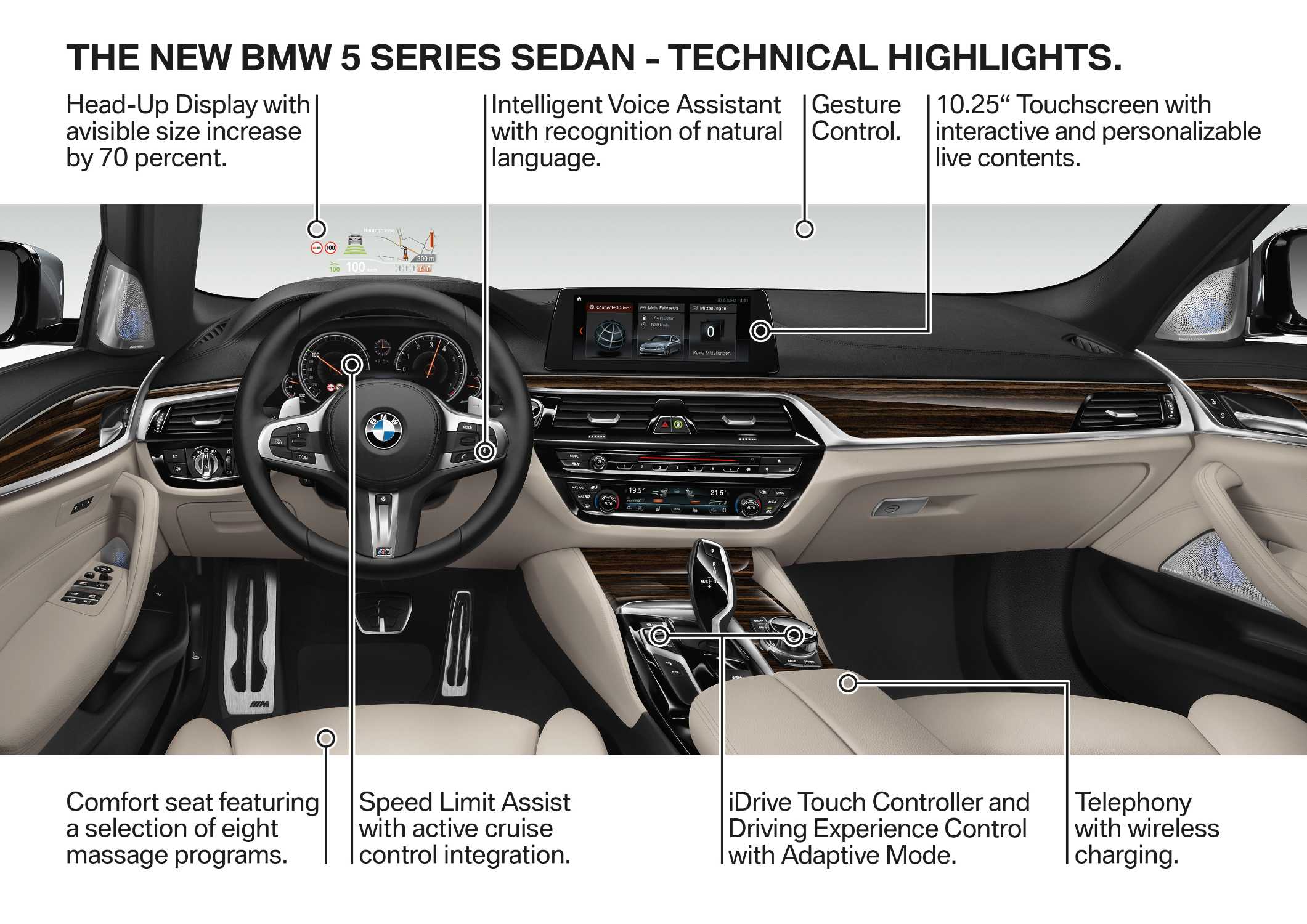 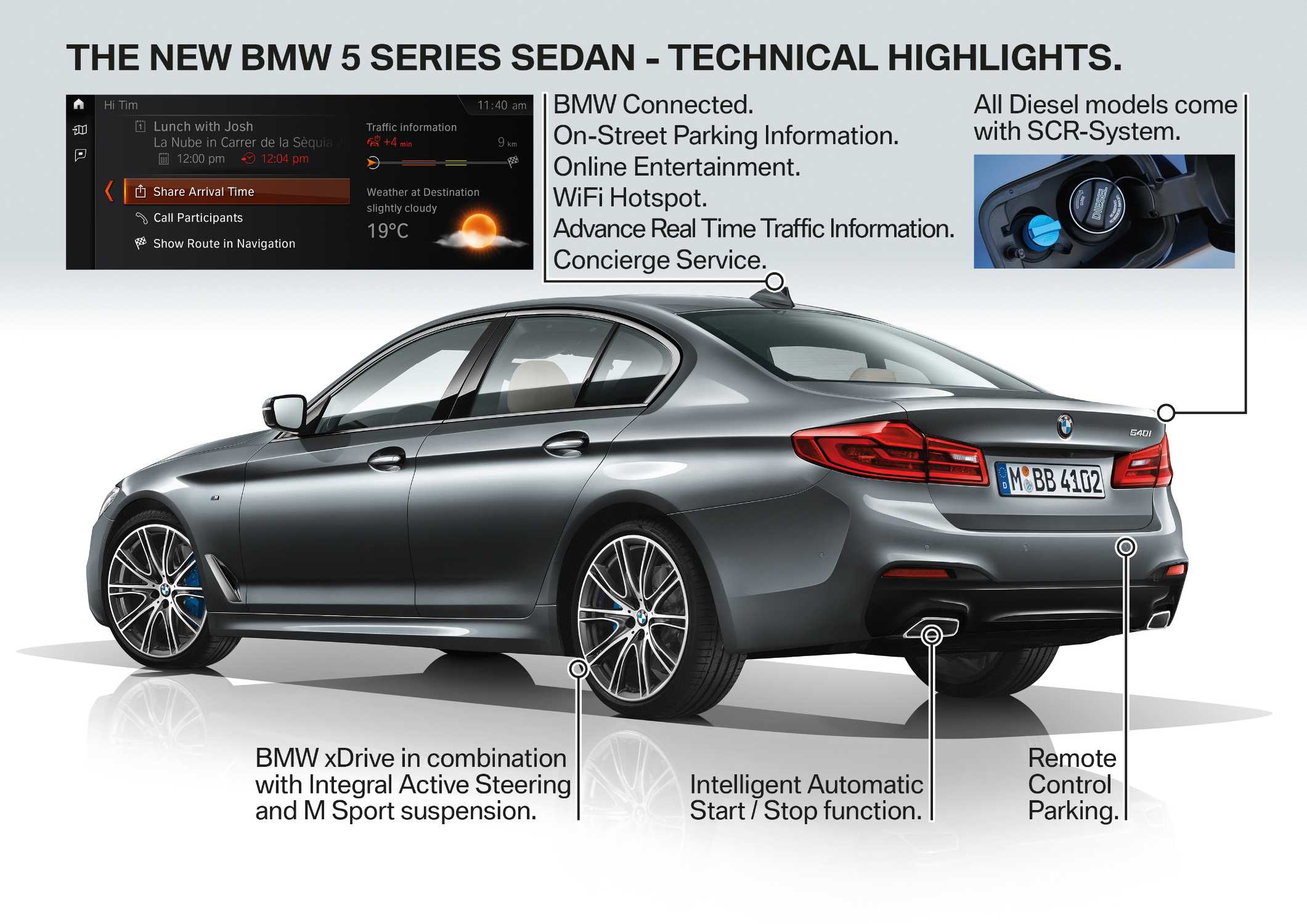 Also to come in March 2017 is a BMW 5 Series Sedan with plug-in hybrid drive system, in the form of the BMW 530e iPerformance. The combination of the BMW eDrive electric drive concept and a four-cylinder petrol engine produces extremely low CO2 emissions of just 46 g/km (2.0 l/100 km)*. System output is 185 kW/252 hp.