A more striking design, LED headlights and an all-new interior take sporting flair and quality feel to another new level. The BMW 2 Series Coupe and BMW 2 Series Convertible have raised the bar in the premium compact class in terms of dynamic prowess, aesthetic appeal and emotional richness.

The BMW 2 Series Coupe and BMW 2 Series Convertible have raised the bar in the premium compact class in terms of dynamic prowess, aesthetic appeal and emotional richness. Scheduled for launch in July 2017, the new models promise to build on this successful concept. They feature sharper front-end styling, LED headlights fitted as standard, further interior upgrades and new connectivity services. And they also offer unbeatable sports performance, courtesy of rear-wheel drive (unique in the segment) working in tandem with efficient power transfer systems. More than 140,000 units of the Leipzig-built models have been delivered to customers so far. The biggest markets are the USA, Great Britain and Germany.

New design elements and new LED lights add another layer to the cars’ presence and elegance. 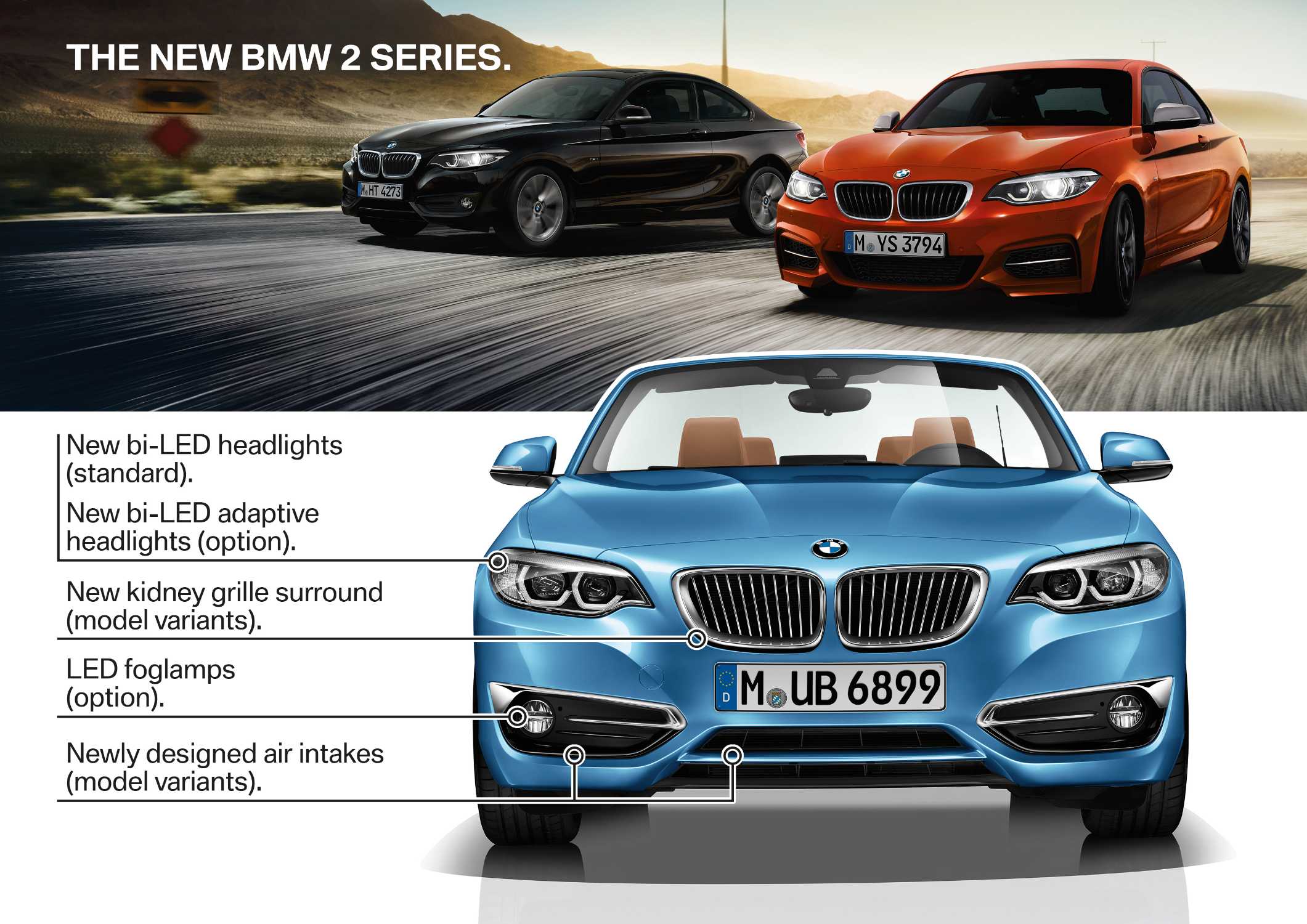 With the changing of the guard from outgoing model to new generation comes a more eye-catching front end for the BMW 2 Series Coupe and BMW 2 Series Convertible. Both models are now fitted as standard with bi-LED headlights. The main headlights can also be specified in adaptive full-LED form as an option, their prominent light graphic strengthening the dynamic and technical impression created by the front end. The familiar twin-circular-headlight look has a hexagonal interpretation, inspiring an even more precise and modern appearance. A larger kidney grille gives the front end of the new models a wider look and allows it to project a sportier impression. The outer air intakes in the three-section front end are now larger and emphasise the cars’ powerful stance on the road. The rear end likewise cuts a muscular figure, the single-piece rear lights (LEDs as standard) with hallmark BMW L-shape extending well into the flanks.

Further upgrades for the interior and appointments. 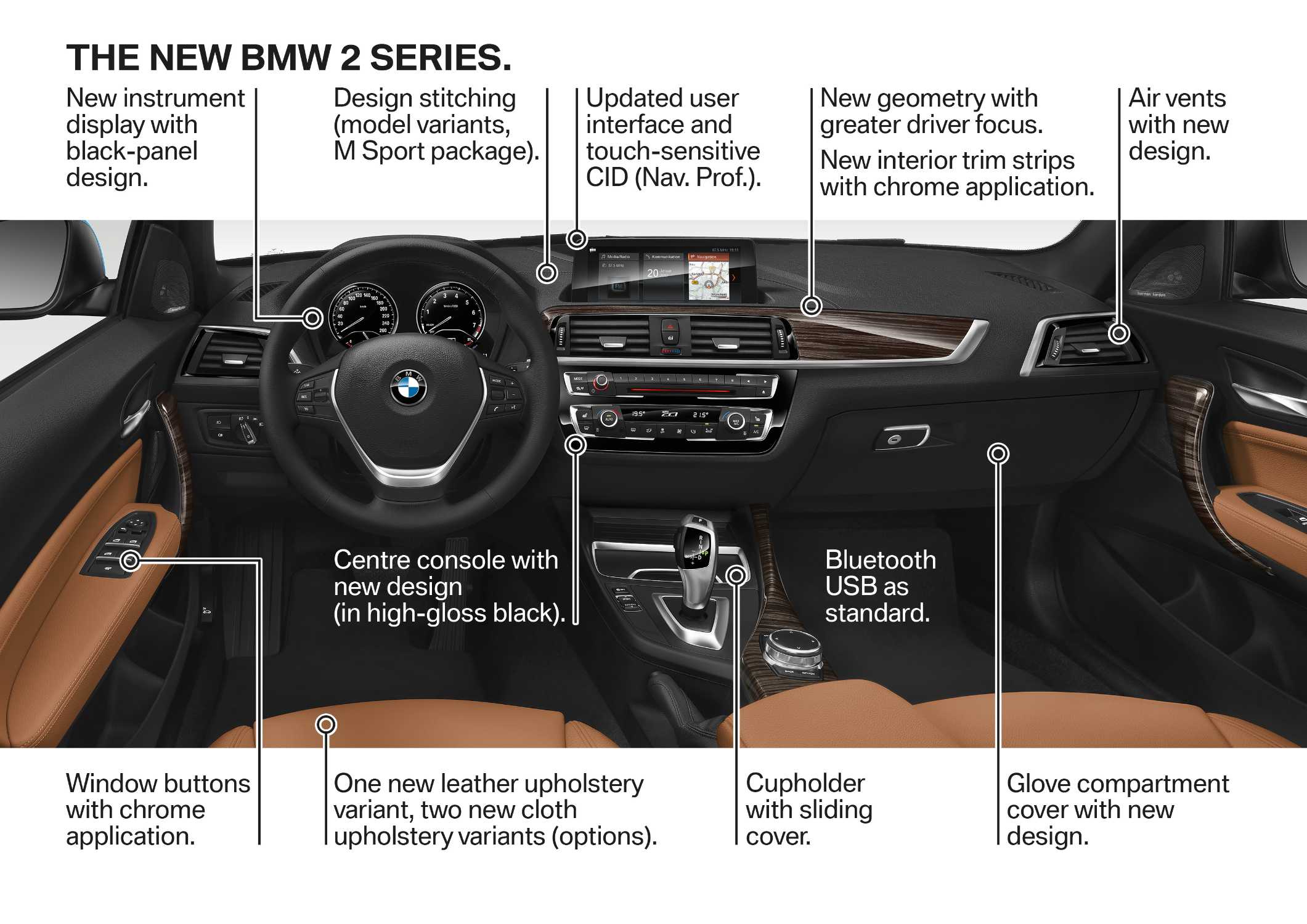 The interior of the new BMW 2 Series models features an all-new design for the instrument panel, which emphasises the focus on the driver even more clearly and significantly enhances the cockpit’s quality feel once again. The interior now has a more spacious, calmer and clearer feel. The elegant design is accentuated by a host of details, such as contrast stitching and high-gloss black surfacing for the centre stack and the chrome elements for the control panels in the doors. New cloth or leather seat upholstery variants, interior trim strips in aluminium or fine wood and high-gloss black panels with chrome accents provide even greater scope for individualisation. 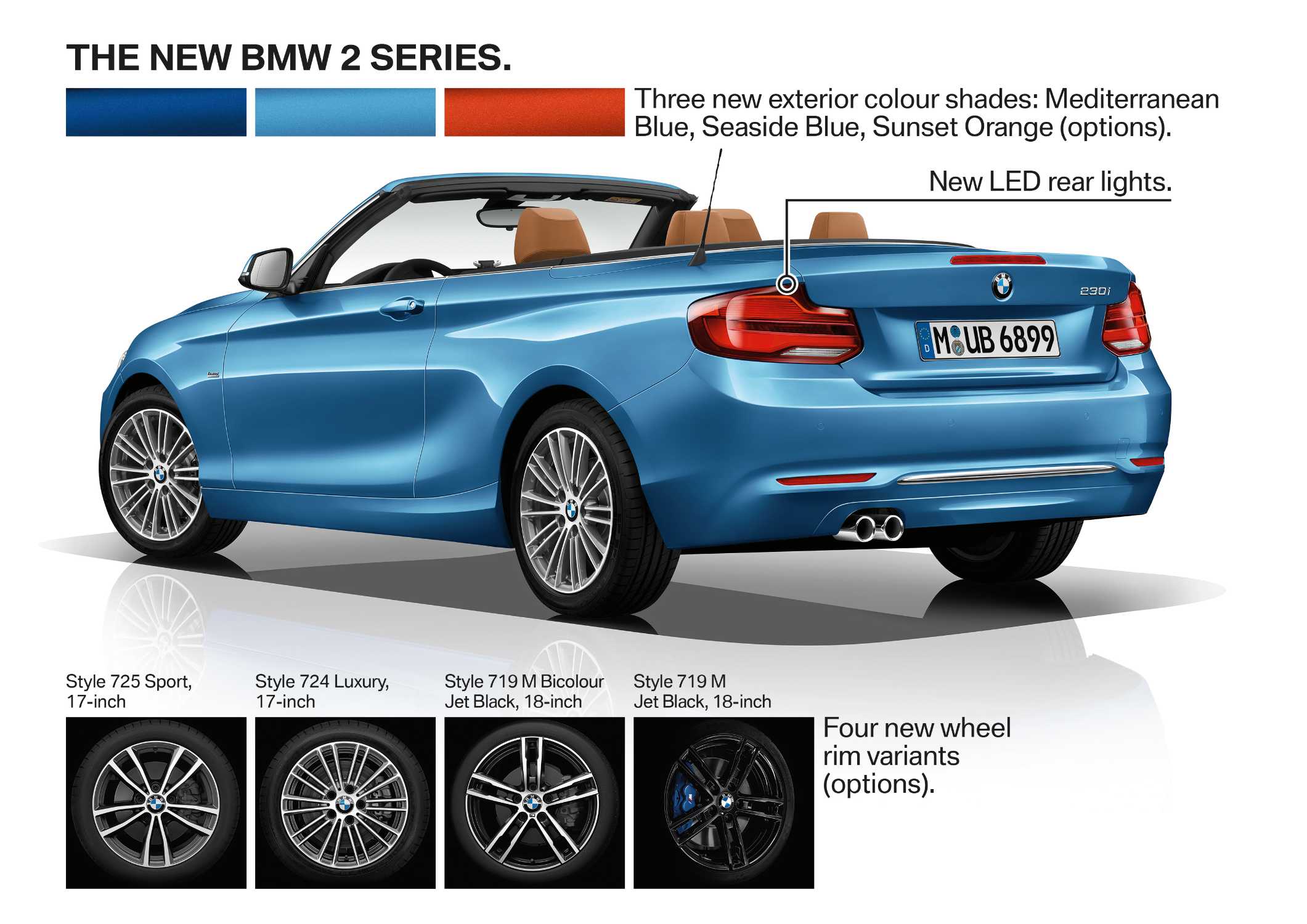 As well as the standard model, the Coupe and Convertible are available in Luxury Line, Sport Line and M Sport variants, and the line-up also includes a BMW M Performance representative – the BMW M240i/M240i xDrive. Mediterranean Blue, Seaside Blue and Sunset Orange have been added to the selection of exterior paint shades. And the choice of light-alloy wheels has also been expanded – to 17 designs in 16-, 17- and 18-inch formats.

At 4,432 millimetres in length, the BMW 2 Series Coupe and BMW 2 Series Convertible condense their sporting prowess into a compact package. And the four-seaters combine these dynamic talents with a high level of everyday practicality. The Coupe has a boot capacity of 390 litres, while the Convertible’s electrically operated fabric soft-top offers admirable acoustic comfort when closed thanks to additional insulation. Plus, it can be opened while on the move – at speeds of up to 50 km/h (31 mph).

The high-resolution 8.8-inch central display in the new BMW 2 Series Coupe and BMW 2 Series Convertible now comes in touchscreen form if the optional Navigation system Professional is specified. This provides the driver with another way of operating various functions, in addition to the latest generation of the iDrive operating system (standard), the Touch Controller and the intelligent voice control system.

The new-generation models present the option of powering compatible smartphones wirelessly by means of an inductive charging tray, and Apple CarPlay can be accessed via a BMW navigation system. Meanwhile, the in-car WiFi hotspot provides a high-speed mobile internet connection for up to ten devices.

The standard SIM card integrated into the car enables optimum connectivity and access to BMW services via BMW ConnectedDrive, without the need for a linked smartphone. These include Real Time Traffic Information (RTTI) with hazard preview, On-Street Parking Information and access to the vehicle via Remote Services. The all-encompassing BMW Connected concept seamlessly integrates the BMW 2 Series into the user’s digital life. BMW is also the first carmaker to offer Microsoft Office 365 users a secure server connection for exchanging and editing emails, calendar entries and contact details, thanks to the car’s built-in Microsoft Exchange function.

The list of assistance systems customers can specify includes Active Cruise Control with Stop & Go function. The Driving Assistant is also available as an option and comprises the Lane Departure Warning system and City Collision Mitigation, which applies the brakes automatically at speeds up to 60 km/h (37 mph) in response to an imminent collision with a car, motorcycle or pedestrian.

A meeting of dynamic excellence and remarkable efficiency.

An extensive line-up of three-, four- and six-cylinder engines is available for the BMW 2 Series Coupe and BMW 2 Series Convertible, producing outputs from 100 kW/136 hp to 250 kW/340 hp (fuel consumption combined: 8.3 – 3.8 l/100 km [34.0 – 74.3 mpg imp]; CO2 emissions combined: 189 – 101 g/km)*. All the petrol and diesel engines are from the latest BMW EfficientDynamics engine family and feature BMW TwinPower Turbo technology. In addition to a basic concept that is inherently more efficient, all the diesel engines feature new turbocharger technology and enhanced common-rail direct injection systems. There are nine drive options to choose from for the BMW 2 Series Coupe and eight for the BMW 2 Series Convertible. The various model variants channel their power through either a six-speed manual gearbox or an eight-speed Steptronic automatic transmission. The efficient automatic comes as standard in the 220i, 230i, 225d and M240i xDrive Coupe models and 225d and M240i xDrive Convertible. The 225d and M240i xDrive variants of both the Coupe and Convertible link up as standard with the eight-speed Steptronic Sport version of the automatic, which offers a steering wheel-mounted manual shift function.

The M240i and 220d variants of the BMW 2 Series Coupe can be ordered either with the particularly engaging characteristics of rear-wheel drive or BMW xDrive intelligent all-wheel drive. BMW 2 Series Convertible customers can specify xDrive for the M240i. The xDrive concept ensures optimum power transfer, enhances driving safety and reduces understeer and oversteer through corners. Sophisticated suspension technology, a low centre of gravity, a wide track and almost perfect 50:50 weight distribution all play their part in the BMW 2 Series’ outstanding dynamics and handling properties.